To abstain from un voting is weakness

To abstain from un voting is weakness 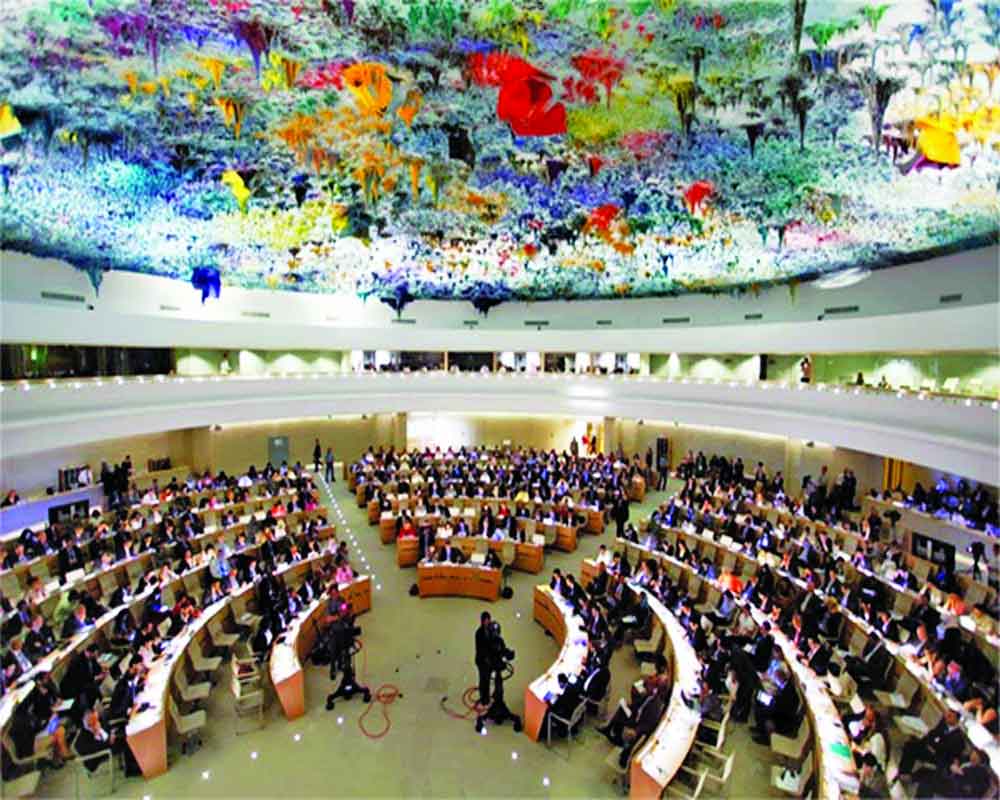 India is not justified to abstain from the voting in the UNHRC against the abuse of minority Muslims in Xinjiang, China

It is a universal phenomenon that politicians, of all ideologies, are transactional in all their dealings. Their motivations are understandable, as they have all manner of interests to protect and aspirations to fulfill and limited time to do it. Yet, in this pursuit of power, there is that Rubicon, the issue of morality that they may cross only at their peril.

Then, with politicians at the helm can relations between countries be anything but transactional? As Lord Palmerston, British Prime Minister in the mid-19th Century put it "we have no eternal allies, and we have no perpetual enemies. Our interests are eternal and perpetual, and those interests it is our duty to follow." Thus, to be successful, holding high moral ground is vital. It is worth noting that the United States' defeat in Vietnam, and Putin's present difficulties in Ukraine, owe much to their own citizen's belief that their actions were or are immoral.

Thus, one is forced to pause and ponder how our government voted at the 51st Regular Session of the UN Human Rights Council, the civilised world's conscience. Two proposals were placed before the Council for voting on by its members. The first, sought a debate on human rights abuses in China's Xingjian Province while the second related to a draft resolution on promoting reconciliation, accountability, and human rights in Srilanka.

It must be said that India was, if nothing else, consistent in its voting, abstaining on both occasions. Unfortunately, by doing so it allowed its actions to be misconstrued and seemingly supportive of elements attempting to avoid accountability. After all, which democracy opposes genuine debate on serious allegations of this nature? What is worse, it was also in line with the Chinese and Pakistani positions on these issues.

Regarding the Srilankan issue, while no substantive explanations were forthcoming, Ambassador Pandey did make clear that "India has substantively contributed to the relief, rehabilitation, resettlement and reconstruction process in Srilanka since 2009."

In the case about accusations against China, the MEA avoided any comment, which in itself is quite intriguing. What is particularly galling is that the proposal was based on a recently released assessment by the UN Human Rights Office on allegations of abuses in Xinjiang. This Report concluded that "the extent of arbitrary and discriminatory detention of members of Uyghur and other predominantly Muslim minorities … may constitute international crimes, in particular, crimes against humanity". It also drew attention to "credible allegations of patterns of torture or ill-treatment, including forced medical treatment and adverse conditions of detention, as well as incidents of sexual and gender-based violence".

To be fair, newspaper reports have attempted to justify our actions, probably on informal inputs from the MEA, suggesting that "it was a principled stand that we have consistently taken in line with our belief that country-specific resolutions which seek public shaming of individual countries for alleged human rights violations are never helpful". However, when did supporting those responsible for such systematic and grave human rights abuses to avoid accountability for their heinous acts ever become a principle? Far from being principled, it calls into question our motives, is morally reprehensible and hypocritical, and does immense damage to our moral standing as a country.

Some have suggested that our response was to avoid such scrutiny in the future, over alleged abuses in Kashmir and elsewhere. If so, then our government has done a great disservice to the reputation of our Security Forces, primarily the military. As well as to our Judiciary, which has been very active, in fact overly so, in coming down hard on perpetrators of such abuses that allegedly occurred. There can also be no denying the fact that despite extremely trying conditions our Security Forces face in such disturbed areas, apart from an odd case or two, their conduct has been measured and in line with all legal provisions applicable. The same cannot be said of forces employed in Syria, Libya, Afghanistan, Pakistan, and now Ukraine.

There are, however, others who believe that our government's motivations are more dubious and disturbing. They allege that this Government has adopted a policy of appeasement towards China in the hope that President Xi would not embarrass the BJP in the coming months as it prepares for the next general election. It is for this very reason that it has accepted and acted on the completely unjust and one-sided agreement reached between opposing Corps Commanders in Ladakh. This all but formalises China's illegal occupation of approximately 1000 Square Kms of territory claimed and previously patrolled by us.

They point out that the BJP used a similar playbook before the last elections, following the Dhoklam Confrontation. Then, after the Wuhan Informal Summit, the government went completely silent on Chinese illegal road construction on the Dhoklam plateau that has now reached the lower slopes of the Zampheri Ridge, opposite the vital Siliguri Corridor connecting the North East that will allow its interdiction, if required. If there is even a modicum of truth in all of this, then sadly we have learned nothing from the likes of Jaichand and Mir Jaffar.

(The author is a military veteran, and a visiting Fellow with the Observer Research Foundation. The views expressed are personal)