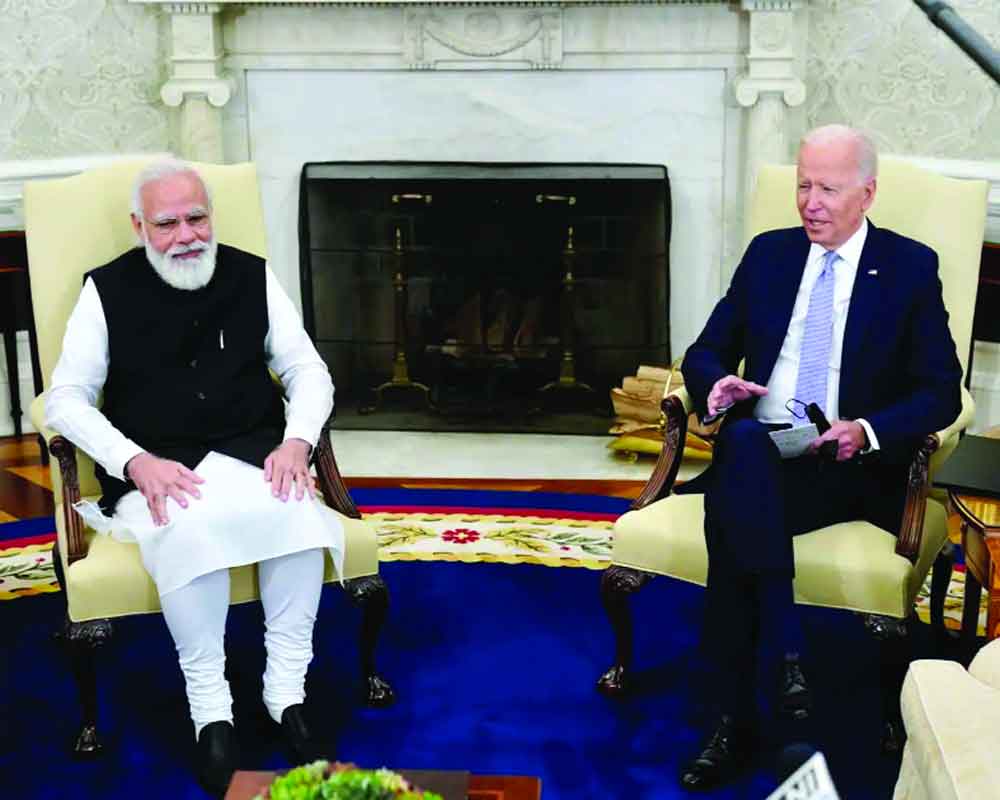 Amid a gloomy picture of the world order due to the Russian invasion of Ukraine, President Joe Biden has redirected his attention to deepening and consolidating America’s ties with its allies and partners in Asia. In this context, the US hosted Asean leaders for a special summit on May 12-13 to take stock of its relationships. Biden paid a five-day visit to South Korea and Japan during May 20-24, launching a mega-regional economic plan for the Indo-Pacific.

While commemorating the 45 years of US-Asean relations, Biden declared the beginning of a new era in their relations. He argued that “a great deal of history of our world in the next 50 years is going to be written and the Asean countries and our relationship with you is the future in the coming years and decades”. Undoubtedly, there are several reasons why the Biden Administration’s political and others efforts to infuse a new movement in the ties with Asean assume huge significance. Of course, one factor that has dominated the US pivot to Southeast Asia is China’s increasing footprints in the region through the Belt & Road Initiative, the Regional Comprehensive Economic Partnership.

Therefore, to contain China’s influence and maintain its permeance in the region, it is imperative for the US to accelerate the level of cooperation with Asean. On the other hand, Asean countries have become alarmed at China’s assertive posturing in the South China Sea. Consequently, they not only want strong American military presence in the region, but are also trying to increase trade and commerce with the US to reduce their economic dependability on China.

Sadly, President Donald Trump’s unpredictable behaviour, the absence of Asean centrality in the Indo-Pacific strategy, the US withdrawal from the Trans-Pacific Trade Agreement created huge distrust among Asean countries about the US’ desire to invest in the relationship. The Biden Administration’s decision to withdraw from Afghanistan, the initial ambiguity in its approach towards Russia’s invasion of Ukraine and other issues only compounded Asean’s apprehensions about the future direction of the relationship.

Expectedly, the special summit addressed certain critical issues of Southeast Asian countries. One, the US reiterated that its Indo-Pacific strategy will be Asean-centric. This acknowledgment was important because Asean has generated the concern that the US Indo-Pacific strategy will dilute its position in US policy towards Asia. Two, Biden also announced to invest $150 million in new projects to bolster Southeast Asia’s climate, maritime and public health infrastructure. Three, Asean countries, except Singapore, have adopted the policy of neutrality on Russia’s invasion of Ukraine. This in turn signalled the decline of US influence in the region. Thus, before starting his Asia tour, Biden wanted to send a message to Russia and China through the Special Summit that the US continues to enjoy close ties with Southeast Asian countries. At the same time, though the joint statement issued after the Summit did not mention the Russian invasion of Ukraine, Biden must have reportedly asked Asean members to take a tough stand on the Russia-Ukraine war.

On the other hand, during his Asia visit, the launch of Indo-Pacific Economic Framework during the second in-person QUAD Summit emerged as a major development. Ever since the reemergence of QUAD in 2017, formally known as Quadrilateral Security Dialogue, it has made huge progress. This can be gauged from the fact that the QUAD meeting was initially held at the junior bureaucratic level. Now, it is organised at different levels, including the heads of State. While QUAD has played a pivotal role in dealing with the COVID virus, the group has become the anchor of promoting a free, open, prosperous and secure Indo-Pacific. Addressing an overdue lacuna in the Indo-Pacific strategy, QUAD has launched Indo-Pacific Economic Framework. In turn, it will play a crucial role in limiting China’s economic clout in the region.

Earlier, QUAD had shown hesitation in adding security issues to its priority. However, the launch of an Indo-Pacific Partnership for Maritime Domain Awareness (IPMDA) has indicated the willingness of the QUAD countries to foster security cooperation. The IPMDA will offer a near-real-time, integrated and cost-effective maritime domain awareness picture and help Quad members’ allies as well to fully monitor their shores.

Of course, Taiwan appeared as a major issue on the priority list of Biden’s visit to Asia. In fact, he said in no uncertain terms that the US would intervene militarily if Taiwan came under Chinese attack. This strong presidential statement, with the presence of the major Asian powers in Tokyo, certainly assumes huge importance, indicating the possible shift in the US’ approach towards ‘One China’ policy. Thus, while the visit has crystallised the Biden Administration’s readiness to lead the regional and global efforts to contain autocratic tendencies in Asia and beyond, it needs to be realised that the success of the Indo-Pacific strategy and QUAD singularly dependents on whether the US and other powers can protect Taiwan’s independence or not.

Thus, while the US has indicated to end the policy of ambiguity on Taiwan, global and regional efforts must be channelised to make Taiwan an integral element of the Indo-Pacific Strategy and QUAD.

(The author is a former Ministry of Foreign Affairs Visiting Fellow, NCCU, Taipei. The views expressed are personal.)