What’s happening in Kazakhstan, & why?

What’s happening in Kazakhstan, & why? 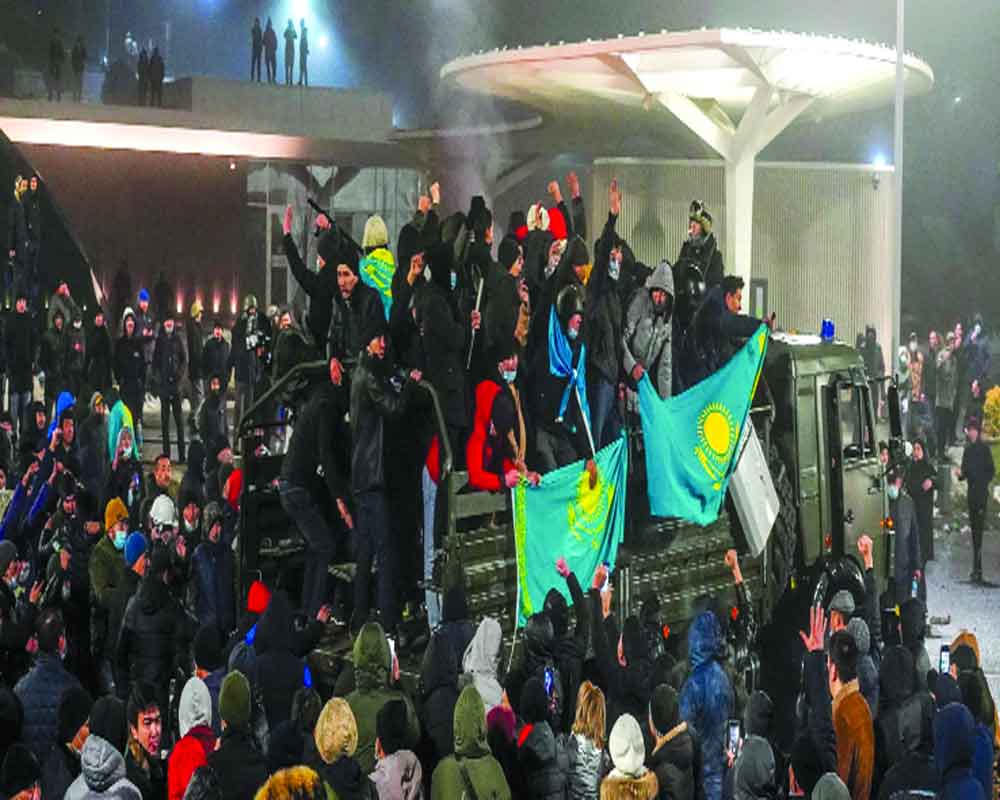 Amid bloody riots, no one except those in charge in Moscow and Almaty seems to know what exactly is happening on the streets of Kazakhstan

Soldiers shot at protesters in Kazakhstan’s biggest city, Almaty, recently, after a few days of violent unrest. The riots have prompted the ruling regime to declare a state of emergency and appeal for help from Russia and other ex-Soviet republics, which were all part of the now-deceased Soviet Union. Dozens of people have died in the riots and thousands have been detained in this Central Asian country during the worst violence seen here since it became independent in the early 1990s. Security forces seem to have reclaimed the main city’s streets a day after Russian paratroopers arrived to help quash the uprising.

Kazakhstan is located between Russia and China and also shares borders with three other ex-Soviet republics. It is the largest economy in Central Asia, with rich hydrocarbon and metal deposits. Kazakhstan is the top global producer of uranium and world’s second largest miner of Bitcoin after the United States. It has attracted hundreds of billions of dollars in foreign investment since becoming independent in 1991. The recent unrest in Kazakhstan has caused an 8 per cent jump in the price of uranium that fuels nuclear power plants. It is the world’s ninth biggest oil exporter, producing some 85.7 million tonnes in 2021, and the 10th largest producer of coal.

For a petroleum-rich country like Kazakhstan to have to raise, or rather double, price of the fuel in one go is surprising. However, the Soviet leaders-turned-noncommunists did not have a reputation of efficient governance. The common folk believe that the leaders are corrupt; whether they are or not is not out in the open. The current Prime Minister, Kassym-Jomart Tokayev, is new, having taken over recently from the 81-year-old Nursultan Nazarbayev, and is yet to prove himself.

For Russia, Kazakhstan is of vital importance since the Baikonur Cosmodrome is Moscow’s sole launching paid for manned space missions. There is none on the Russian end and, therefore, it cannot let Baikonur go into alien hands. On the other hand, President Putin’s Government is busy on the Ukrainian front, having deployed a large military force on its southeastern border. It is therefore not the best time for Russia to go and intervene in Kazakhstan. At the same time, Chinese President Xi Jinping has conveyed to Prime Minister Tokayev to ensure that his Government’s action on people should be highly responsible. China and Kazakhstan share a border.

The yellow giant is a land-hungry country while Kazakhstan is one of the world’s largest countries in terms of land area with only about six persons per sq km. Kazakhstan has therefore to be cautious in what its Government does, how sternly or gently it treats its currently rebellious citizens. For the present, the law and order is being helped by the presence of some 3,000-odd soldiers that Moscow has urgently sent. They are on the streets armed with orders to shoot to kill. Several hundred agitating Kazakhs have already been killed and many more injured in firing.

The picture is incomplete if we do not take note of US Foreign Secretary Antony Blinken’s diplomatic moves, who has said that President Biden’s administration is “very concerned” about the situation in Kazakhstan. Blinken iterated Washington’s full support for Kazakhstan’s constitutional institutions and also stressed the importance of respecting human rights, media freedom et al. Evidently, there are more cooks ready to dabble in the Kazakh kitchen than there is meat to cook in there. What America can, or wishes to, do in this faraway Central Asian country is a matter of wonder.

Two more points have been talked about in the media. One is that if people on the streets of Almaty see Russian soldiers, they would react strongly. And if the Russians see on television their soldiers on the streets of Almaty being killed by Kazakh rebel bullets, they would react furiously. No one except those in charge in Moscow and Almaty seems to know what exactly is happening on the streets of Kazakhstan. One can only guess that the political opponents of the Tokayev regime have seized this opportune time to try and overturn the Government. Are they political autocrats or democrats, it is difficult to tell because we do not know them. The Government for its part has described them as bandits or terrorists.

However, one factor is certain and that is that history is against autocracy. Information and the spread of knowledge have by now reached mindboggling dimensions and levels. With Information Technology, Google, YouTube, the versatile mobile telephony and super-smart phones, e-mail and what not, it is difficult to not know. Very recently, one heard on TV that one out of two adults on earth have a mobile telephone. Evidently, facts are known immediately, almost in a flash, though not necessarily the explanations beyond the facts.

A hundred years ago, few would have debated as to which is better, autocracy or democracy. Many considered a benevolent dictator to be an ideal compromise. That is not certainly the case anymore, with the information being the catalyst.