Will Russia play the ‘Cuban card’?

Will Russia play the ‘Cuban card’? 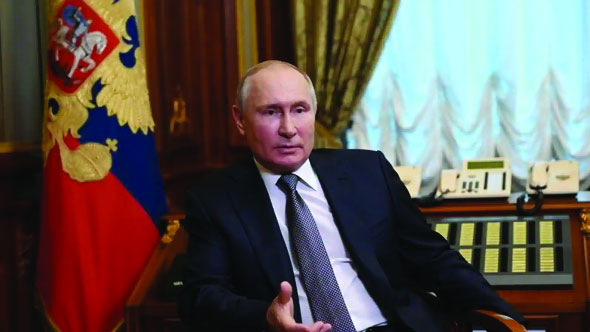 But Russia stopped being Communist 30 years ago

After a week of intense discussions about ‘security’ between Russia and the NATO countries, this is the week when the Western allies will send their written replies to Russian President Vladimir Putin. Various pundits, some of whom have actually been to Russia, warn us that there will be ‘War in Europe’ if Putin’s demands are not met.

(You there, at the back. Stop giggling! This is no laughing matter! Peace is hanging by a thread!)

Historians keen for a moment in the limelight are being wheeled out to draw parallels with past diplomatic disasters like the Munich conference of 1938 (appeasement of Hitler) and Yalta in 1945 (carving up Europe and giving Stalin the eastern half in 1945).

And this just in! Deputy Foreign Minister Sergei Ryabkov, just back in Moscow from the talks, told Russian television that if the talks failed, he could “neither confirm nor exclude” that Russia would send “military assets” to Cuba and Venezuela.

Wow! A dagger - no, two daggers - pointed at the heart of America (although they’ll have to work on the length of the Venezuelan dagger, since it’s 2,000 km. from Caracas to Miami). If that does not force the Americans to give in, what will?

I’m sorry. That’s enough sarcasm. It’s just that all this prancing around and mugging for the camera gets tiresome. This is a minor diplomatic spat that has been deliberately inflated far beyond its merit, and it is being taken much too seriously.

Let’s start with Russia playing the ‘Cuban card’. Cuba is still a Communist country, and Maduro’s regime in Venezuela also has aspirations in that direction - but Russia, in case you’ve forgotten, stopped being Communist thirty years ago.

Ryabkov’s intention was obviously to do a “How would you like it if...?” on American diplomats. How would like it if there were Russian troops ‘90 miles from Florida’ (as people used to say during the Cuban crisis of 1962), and not NATO troops 450 km. from Moscow (which is where they are now).

The grown-up American answer to that would be “Who cares?” In real life, there are a number of troglodytes in the US Congress who would work themselves up into a lather about Russian troops in Cuba  - but since the Cubans would not agree to it in the first place, it’s really quite irrelevant.

Well, then, what about the alleged historical precedents: Munich and Yalta? They were both about granting a ‘sphere of influence’ in Europe to a great power (Germany in 1938, the Soviet Union in 1945) that could easily enforce its wishes on the ground.

Russia is effectively demanding a comparable sphere of influence in its old ‘satellite’ countries, which would not be allowed to have friendly foreign troops on their soil even though they are NATO members, but it’s a complete non-starter. Russia lacks the military capacity to enforce its will on the ground.

So will there be ‘War in Europe’, as the feverish headlines suggest? Not in the sense they imply: massive armoured forces rolling across whole countries, with the threat of nuclear war looming in the background. But there might be some shooting on or just inside Ukraine’s  border with Russia.

Of course, there’s already a little bit of shooting along that border, in the Russian-backed breakaway provinces of Donetsk and Luhansk. As Pentagon spokesman John Kirby said on Friday, Putin may now be planning to cause a little more.

Kirby warned that Russia “has pre-positioned a group of operatives to conduct what we call a false-flag operation, an operation designed to look like an attack on them or on Russian-speaking people in Ukraine, as an excuse to go in.” He may be right - and he may be wrong. The satellites can see their location, but not their intentions.

Something has got into Putin, and he’s seeking concessions that he should know he cannot extract, with threats that he cannot enforce.

It is possible that he could blunder into a local clash that would bring harsh sanctions down on Russia.

It is extremely unlikely that he would try to conquer all or even half of Ukraine.

It is almost inconceivable that this will end up with Second World War-style battles between large armoured forces.