Modi-Deuba talks in Lumbini will have comprehensive agenda: Foreign Secy

Modi-Deuba talks in Lumbini will have comprehensive agenda: Foreign Secy 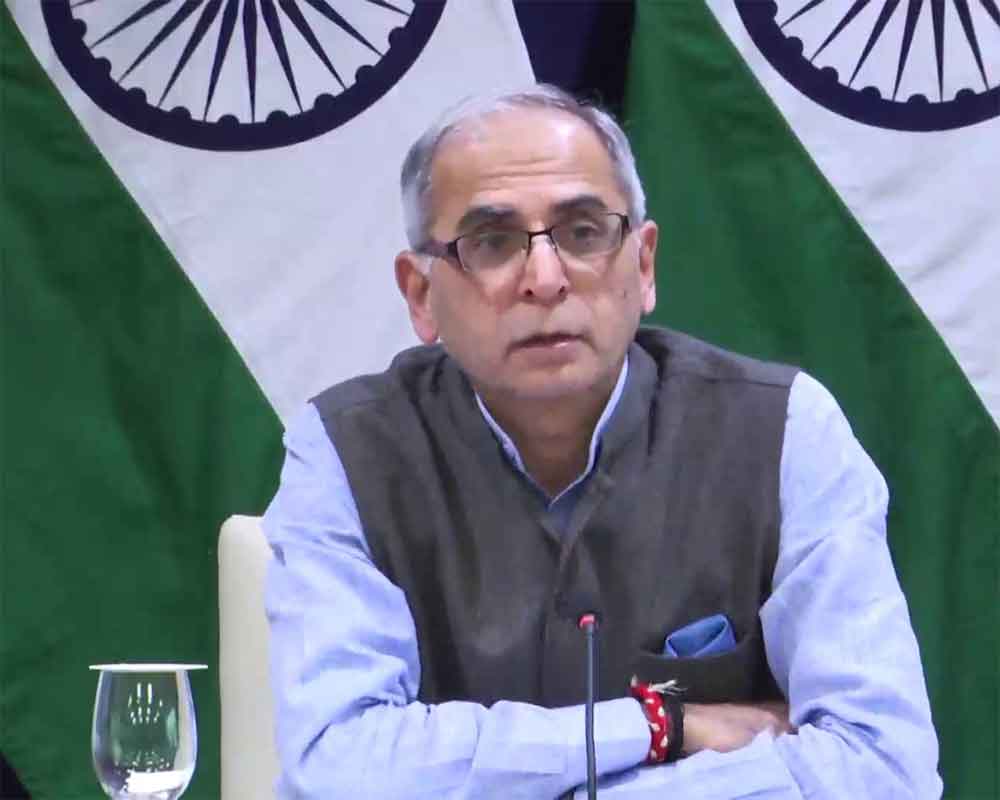 Prime Minister Narendra Modi's talks with his Nepalese counterpart Sher Bahadur Deuba at Lumbini in Nepal on May 16 will have a comprehensive agenda to further expand cooperation in multiple areas including hydropower and connectivity, Foreign Secretary Vinay Mohan Kwatra said on Friday.

Asked whether the boundary dispute between the two sides will figure in the talks, he said India has always maintained that the existing bilateral mechanisms are the best way forward to deliberate on the issues, adding they should be discussed in a "responsible manner" without their "politicisation".

Modi is paying a day-long visit to Lumbini on the occasion of Buddha Purnima. It will be the prime minister's fifth visit to Nepal since 2014.

In Lumbini, the prime minister will visit the sacred Mayadevi temple and deliver an address at a Buddha Jayanti event organised by the Lumbini Development Trust.

"The fact that a return visit is taking place in such a close succession is a reflection of the closeness of our high-level exchanges as well as of the upward trajectory in our mutually beneficial partnership," Kwatra said.

The foreign secretary said Modi and Deuba will build on their productive conversation in Delhi last month with a view to further expanding the shared understanding and cooperation in multiple areas including hydropower development and connectivity.

He said the visit will "reaffirm" India's commitment toward ties with Nepal and demonstrate the priority that New Delhi attaches to the neighbourhood.

"In have a feeling that the conversation between the two leaders will have a comprehensive agenda and it cover the entire scope of discussion," Kwatra said. The foreign secretary said the entire "scope and landscape" of the India-Nepal partnership is "very wide and extensive".

"The conversations between the two leaders will pick up from where they left off last month when Prime Minister Deuba visited here and would no doubt cover all elements of our bilateral engagement whether it is development partnership, whether it is assessment and stock-taking of how connectivity projects are doing, what more can be done to connect the two societies of south Asia and also aspects related to hydropower cooperation, trade and investment," Kwatra said.

Asked about the report of the Eminent Persons Group (EPG), he said it is yet to be submitted. "The government will take it into consideration once it is submitted."

The EPG was constituted to look into various aspects of India-Nepal ties including to look at the 1950 friendship treaty between the two countries. On the boundary dispute, Kwatra said there are established bilateral mechanisms to address such issues.

"In so far as the border discussions between the two countries are concerned, as you all know, there are established bilateral mechanisms which exist between them," he said.

"We have always maintained that they are the best way forward in discussing those issues, discussing in a responsible manner without really politicisation of those issues. That is subject which will essentially be in the score of those established bilateral mechanisms," he added.

Ties between the two countries came under severe strain after Kathmandu published a new political map in 2020 that showed three Indian territories - Limpiyadhura, Kalapani and Lipulekh - as part of Nepal.

On its part, India reacted sharply, calling it a "unilateral act" and cautioned Kathmandu that such "artificial enlargement" of territorial claims will not be acceptable to it.

Kwatra said Modi will start the visit with a "darshan" (visit) to the famous Mayadevi temple which lies at the very heart of Lumbini.

The temple is known to be the site of the birth of Lord Buddha.

The prime minister had gifted a Bodhi tree sapling from Bodh Gaya to this temple during his visit to Nepal in 2014.

Modi will then visit the adjacent monastic zone in Lumbini where he will participate in the foundation-laying ceremony for the construction of a centre for Buddhist culture and heritage.

Land-locked Nepal relies heavily on India for the transportation of goods and services.

Nepal's access to the sea is through India, and it imports a predominant proportion of its requirements from and through India.

The India-Nepal Treaty of Peace and Friendship of 1950 forms the bedrock of the special relations between the two countries.