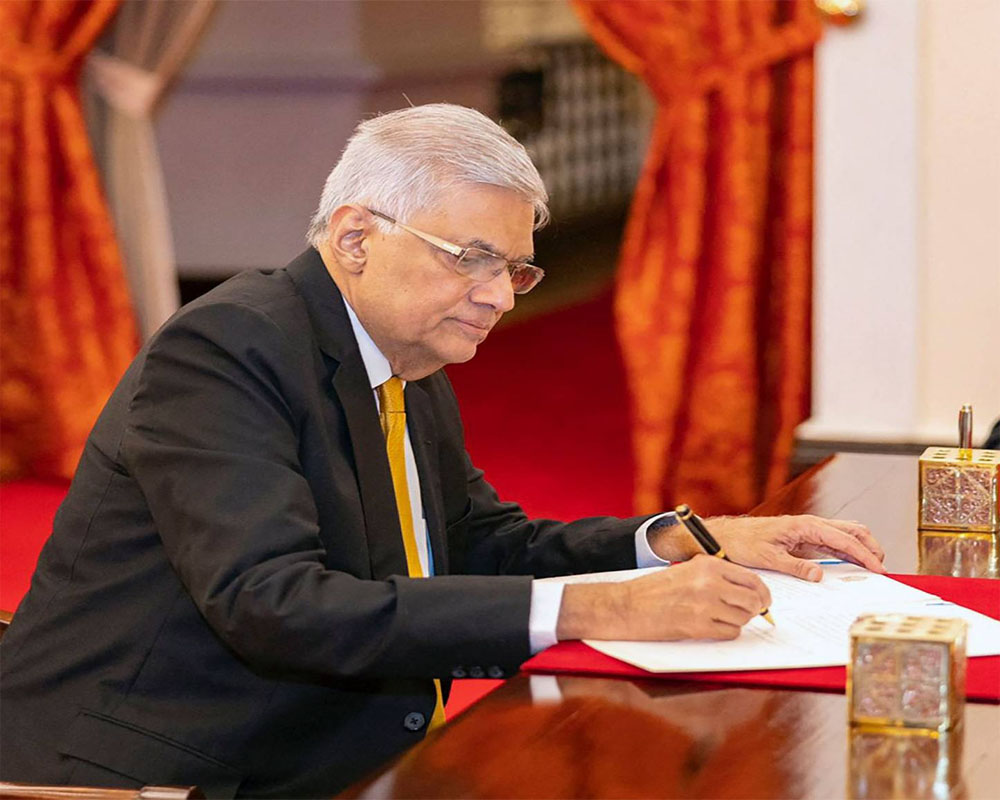 Sri Lanka's new Prime Minister Ranil Wickremesinghe has said he looks forward to closer ties with India during his term and thanked India for its economic assistance to the country as it tackles the worst economic crisis since independence.

Wickremesinghe, 73, was sworn-in as Sri Lanka's 26th prime minister on Thursday to stabilise the country's debt-ridden economy and end the political turmoil.

“I want a closer relationship and I want to thank Prime Minister (Narendra) Modi,” Wickremesinghe said, referring to the Indian economic assistance to his country.

His remarks came during a religious ceremony held here last night after he took the oath.

India has committed more than USD 3 billion to debt-ridden Sri Lanka in loans, credit lines and credit swaps since January this year.

India on Thursday said it looked forward to working with the new Sri Lankan government formed in accordance with the democratic processes and New Delhi's commitment to the people of the island nation will continue.

The 73-year-old United National Party (UNP) leader took over as the prime minister as the country was without a government since Monday when President Gotabaya Rajapaksa's elder brother and prime minister Mahinda Rajapaksa resigned after violence erupted following an attack on the anti-government protesters by his supporters.

The attack triggered widespread violence against Rajapaksa loyalists, leaving nine people dead and wounding over 200 others.

Wickremesinghe said his focus was limited to tackling the economic crisis.

“I want to settle this problem to ensure the supply of petrol, diesel and electricity to the people," Wickremesinghe said.

Sri Lanka is facing its worst economic crisis since gaining independence from Britain in 1948. The crisis is caused in part by a lack of foreign currency, which has meant that the country cannot afford to pay for imports of staple foods and fuel, leading to acute shortages and very high prices.

“I will do the job that I have undertaken to do”.

Asked if he could sustain his premiership in the 225-member Parliament since he only has only one seat, he said: “I will prove the majority when it comes to that”.

Referring to the islandwide protests, Wickremesinghe said the main protest near president Gotabaya Rajapaksa's secretariat for over a month now would be allowed to continue.

“I will talk to them (protesters) if they are willing," he said.

Asked if he feared protest demanding him to quit, he said he would face them.

“If I can undertake the job to handle the economic crisis, I will handle that too," he said.

Wickremesinghe was appointed the Prime Minister as the main Opposition Samagi Jana Balawegaya (SJB) party and the third-largest party Janatha Vimukthi Peramuna (JVP) attached tough conditions, such as the resignation of President Rajapaksa, to lead the interim government.

Wickremesinghe heads the interim government in which all political parties are to be stakeholders for a limited period before facilitating a parliamentary election.

Members of the ruling Sri Lanka Podujana Peramuna (SLPP), a section of the main Opposition SJB and several other parties have expressed their support to show a majority for Wickremesinghe in Parliament, sources said.

However, several factions opposed the move to appoint Wickremesinghe as the new Prime Minister.

The JVP and the Tamil National Alliance claimed that his appointment was unconstitutional.

The veteran politician is seen as being close to the Rajapaksa clan. But he does not currently command much support from the Opposition or among the public. It remains to be seen if he can prove his majority in the 225-member Parliament.

“We will allow him space," Weerasumana Weerasinghe of the Communist Party said.

Sri Lanka's worst economic crisis has provoked widespread protests calling for political reform and the resignation of President Gotabaya Rajapaksa. On April 1, President Rajapaksa imposed a state of emergency, lifting it five days later. The government reimposed a state of emergency on May 6 after police fired teargas and arrested students protesting near parliament, which was adjourned until May 17.

Although the protests have been overwhelmingly peaceful, the police fatally shot a protester on April 19, and on several occasions have used teargas and water cannons against protesters. The authorities have made numerous arrests and repeatedly imposed curfews.

The political crisis was triggered in late March when people hurt by long hours of power cuts and essential shortages took to the streets demanding the resignation of the government.

President Rajapaksa sacked his cabinet and appointed a younger cabinet as a response to the demand for resignation. A continuous protest opposite his secretariat has now gone on for well over a month.

On Monday, his brother Mahinda Rajapaksa resigned as the prime minister to make way for the president to appoint an interim all political party government.