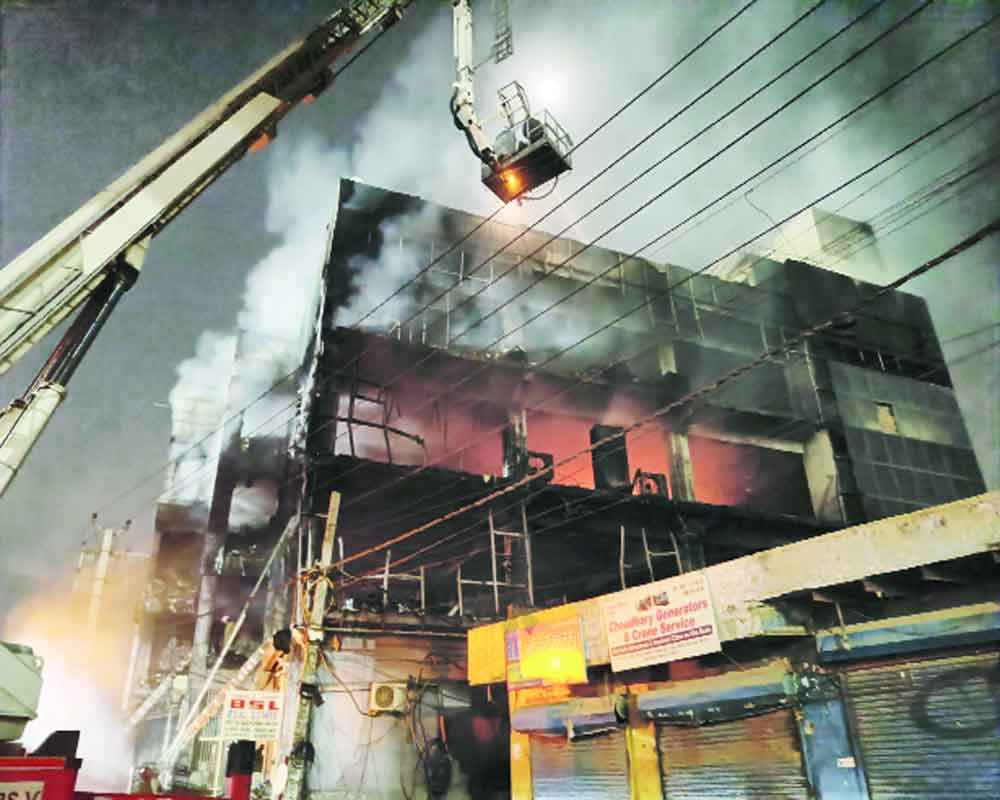 70 rescued but toll may go up as NDRF continues search

In a tragic incident, 27 people were killed in the national Capital after a massive fire broke out in a four-storey commercial building near outer Delhi’s Mundka Metro Station in West Delhi on Friday evening. Around 12 people were injured in the incident while as many as 70 people were rescued. The search operation was still going and the NDRF team had reached the spot at the time of filing of this report to retrieve people suspected to be trapped or buried under the debris.

The Government has announced a compensation of Rs 2 lakh for the kin of the dead, and Rs 50,000 for the injured. Police have detained Harish Goel and Varun Goel, who had leased the building from Manish Lakra, the owner of the building. They both used to live on the top floor while around 150 people used to work in the building.

It is suspected that there were only two exit gates in the building and locals said that the workers had to escape after breaking the glass of the windows on the ground floor.

According to Atul Garg, Director, Delhi Fire Service (DFS), a call was received about the blaze at 4.40 P.M. following which 24 fire tenders were rushed to the spot.

“The fire broke out in a building near pillar number 544, Mundka Metro Station,” said Garg, adding that more than 100 firemen are on the spot. According to Sameer Sharma, Deputy Commissioner of Police (DCP), a Police Control Room (PCR) call was received at Mundka police station at around 4.45 P.M. regarding a fire in an office. A police team immediately reached the spot and put in their best efforts to rescue the workers.

“Police officers broke the windows of the building to rescue the people and got 12 injured people admitted to hospital.

On preliminary enquiry it has been learnt that the building is a four storey one used commercially for providing office space to companies,” said the DCP.

“The fire started from the first floor of the building which houses the office of a CCTV camera and router manufacturing/assembling company. Over 50 employees/workers of the company were reportedly rescued while rescue teams have so far recovered 27 bodies,” said the DCP.

Following the fire, thick fumes of black smoke could be seen billowing out of the ill-fated building. The firemen used the fire truck ladder to reach the maximum possible height to spray water on the blaze.

“Distressed by the tragic fire accident at a building near Mundka Metro Station in Delhi. My condolences to the bereaved families. I wish for speedy recovery of the injured," tweeted the President.

“Extremely saddened by the loss of lives due to a tragic fire in Delhi. My thoughts are with the bereaved families. I wish the injured a speedy recovery," tweeted PM Modi.

Delhi Chief Minister Arvind Kejriwal tweeted, "Shocked and pained to know about this tragic incident. I am constantly in touch with officers. Our brave firemen are trying their best to control the fire and save lives. God bless all."