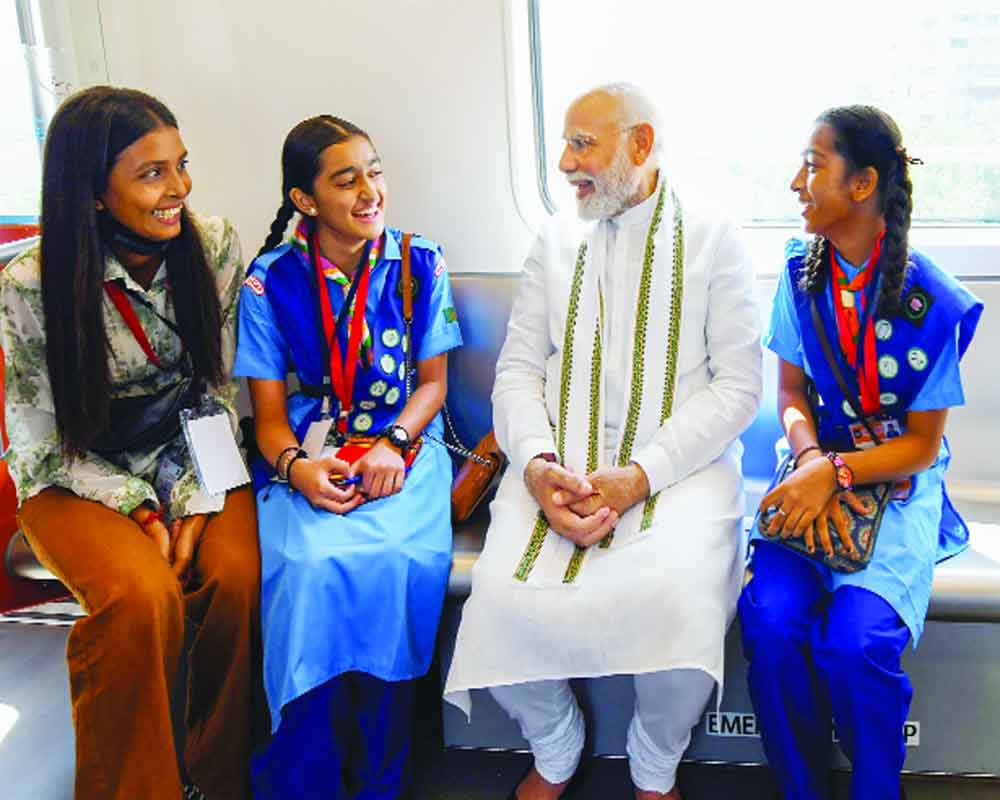 Prime Minister Narendra Modi on Friday flagged off the Gandhinagar-Mumbai Vande Bharat Express semi-high speed train and inaugurated the first phase of the Ahmedabad Metro rail project on the second day of his two-day visit to Gujarat, where Assembly elections are due by the year-end.

Modi also travelled in the express train and the metro train before addressing a rally in Ahmedabad, where he said cities will shape the destiny of India and ensure that it becomes a developed nation in the next 25 years.

“PM @narendramodi is on board the Vande Bharat Express from Gandhinagar to Ahmedabad. People from different walks of life, including those from the Railways family, women entrepreneurs and youngsters are his co-passengers on this journey,” the Prime Minister’s Office (PMO India) said in a tweet.

In the photographs attached with the tweet, the prime minister is seen interacting with railway officials, women entrepreneurs and others on board the train.

The train, which connects the capital cities of Maharashtra and Gujarat, is the third Vande Bharat Express in the country. The first such train was started on New Delhi-Varanasi route, while the second one on New Delhi-Shri Mata Vaishno Devi Katra route, an official said.

Modi then disembarked from the express train at the Kalupur railway station. At the Kalupur metro rail station, he inaugurated the first phase of the Ahmedabad metro rail project between Thaltej and Vastral. After that, he then took a ride in the metro train till Thaltej station. Gujarat Chief Minister Bhupendra Patel and party MPs C R Paatil and Kirit Solanki accompanied him during the journey.

With the inauguration, the 21-km corridor of the project between Thaltej and Vastral with 17 stations became operational. This corridor has a 6.6 km underground section with four stations, the Gujarat Metro Rail Corporation (GMRC) said in a release.

Addressing a rally at Ahmedabad later, Modi said cities will shape the destiny of India and they will ensure that it becomes a developed nation in the next 25 years.

Stating that new cities are being built in the country as per the global business demand, he also made a pitch for modernising cities as per the changing times and called for the creation of twin cities.

“India of the 21st century is going to get new momentum from the cities of the country. With the changing times, it is necessary to continuously modernise our cities with the changing needs. So much focus is being given and investment being made on the cities in the country, because they will ensure the creation of a developed India in the coming 25 years,” he said.

Ahmedabad, Surat, Vadodara, Bhopal, Indore, Jaipur - these cities will shape the destiny of India in the next 25 years. These investments are not limited to connectivity alone, but smart facilities are being put in place in dozens of cities; basic facilities are being improved and suburbs are being developed, he said.

On twin cities, he said, “Gandhinagar-Ahmedabad is an excellent example of how a twin city is developed. Base is being prepared for development of many twin cities in Gujarat. So far, we have heard about the New York-New Jersey twin cities. Our India cannot lag behind.”