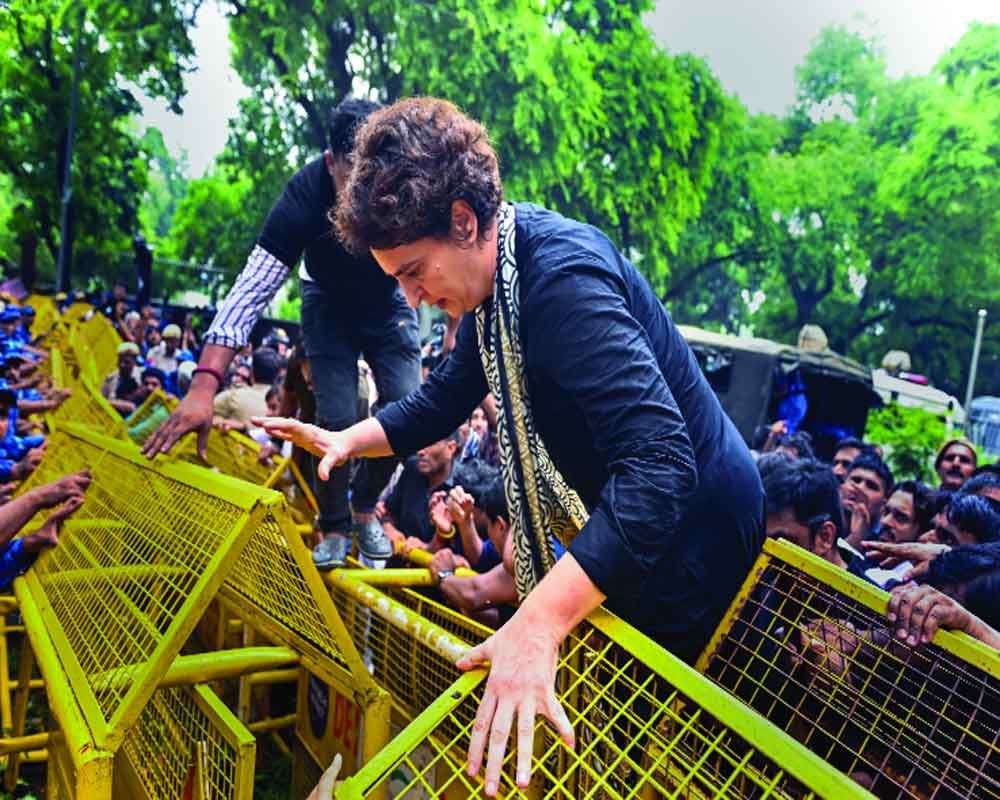 The Congress on Friday staged a countrywide protest against price rise, GST and unemployment, but the party leaders were more  vocal on criticising the Centre alleging that the Government unleashed the Enforcement Directorate against the Gandhis in the National Herald case.

The  epicentre of the protest was Delhi where Rahul Gandhi and Priyanka Gandhi led from the front, but the party also mobilised its cadre in several States to give it a shape of pan-India agitation against the policies of the Modi Government.

Congress chief Sonia Gandhi led the protest inside Parliament premises but did not attend the march due to health issues.

Wearing black outfits, Rahul , Priyanka, and nearly 60 Congress MPs from both Houses of Parliament and hundreds of Congress workers were detained when they tried to march to Rashtrapati Bhavan from Parliament.

Ahead of the protest, Rahul addressed a Press conference during which he alleged that India is witnessing the “death of democracy” and anybody who stands against the onset of dictatorship is “viciously attacked”.

He said the Gandhi family is attacked because it fights for democracy and for communal harmony.

He charged that the sole agenda of the Government is that people’s issues such as price rise, unemployment and violence in society must not be raised.

“What we are witnessing is the death of democracy. That is what India is witnessing. What India has built brick by brick, starting almost a century ago, is basically being destroyed in front of your eyes,” said  Rahul, who was flanked by party leaders Jairam Ramesh and Ashok Gehlot.

Asked about the questioning by the Enforcement Directorate of Congress president Sonia and him in the National Herald case, Rahul said, “Question all you want, there is absolutely nothing there, everybody knows it. We are not going to be intimidated by such tactics.”

The MPs and others who were detained by the police during the protest were released after about six hours. Rahul, Priyanka, K C Venugopal, Adhir Ranjan Chowdhury and Gaurav Gogoi were among the MPs detained.  In a statement, the Delhi Police said a total 335 protesters, including 65 MPs, had been detained under the Delhi Police Act in order to “maintain law and order” in the area.

The protesting MPs  raised slogans against the Government demanding that the GST hike on essential items be withdrawn, with party chief Sonia standing with the women MPs holding a banner outside gate number 1 of Parliament.

Priyanka and several other women party leaders were dragged into police vehicles from outside the party headquarters. She had climbed over barricades to reach the spot where she held a brief sit-in before being taken away by police which had denied permission for the protest, citing law and order. While the male Congress MPs were seen sporting black kurtas, shirts, scarves, and headgears, the women leaders also wore black with elan led by party chief Sonia who wore a printed crisp saree with a black border and a black blouse. Leader of Opposition in Rajya Sabha Mallikarjun Kharge wore a black kurta, a black turban and a white dhoti .

Former Union Minister P Chidambaram and his son and MP Karti Chidambaram sported black shirts with white ‘veshtis’ (type of dhoti), while Shashi Tharoor was seen in all blacks — kurta, trouser and ‘Sadri’.

“During the debate on price rise in Parliament, BJP members said they can’t see inflation. So today by wearing black we are expressing the anger our people are feeling, we are expressing that they (Government) open their eyes to the reality of India today. Even the RBI Governor has conceded that there is high inflation but the BJP MPs and the Finance Minister have lied to people of India on the floor of the House that there is no inflation,” said party MP from Assam Gaurav Gogoi.

The Congress  is  preparing a massive public mobilisation programme when it launches the Kanyakumari to Kashmir ‘Bharat Jodo Yatra’, which is also being seen as an occasion for yet another “Rahul relaunch” experiment. The plan of ‘padayatra’ covering 3,500 km in 148 days will have Rahul and other leaders in full strength at different times.