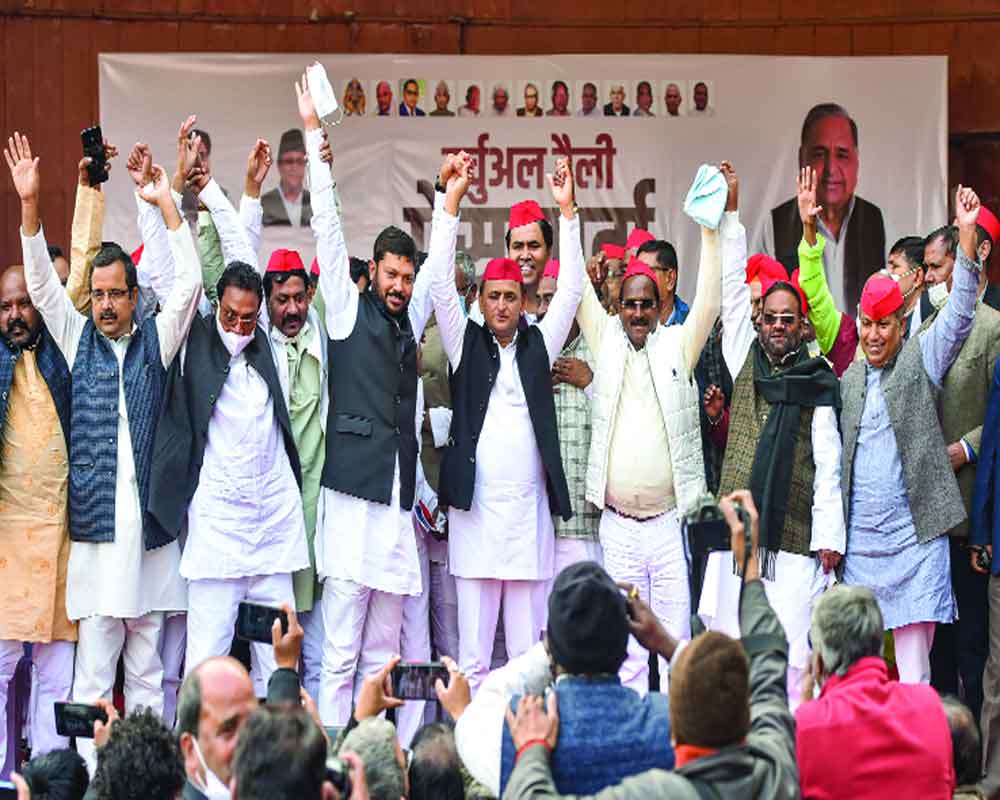 6 other rebels too, join Akhilesh; end of BJP is nigh, says Swami Prasad

The defection from the party is a setback for the ruling BJP, which enjoyed the support of the OBCs in the 2017 Uttar Pradesh (UP) Assembly elections and 2019 General elections. The SP chief Akhilesh Yadav welcomed Maurya and the others into the party fold.

Addressing the meeting at the SP headquarters, Maurya said Makar Sankranti will mark the beginning of the end of the BJP. “The big leaders of the BJP who never paid any heed to our demands are having sleepless nights now. The BJP has duped the OBCs, Dalits, minorities and youth of the country. They formed the Government by encashing on the name of Keshav Prasad Maurya and Swami Prasad Maurya. There were talks about making either of us the CM, but they brought someone from Gorakhpur and duped Dalits and Backwards”, alleged Maurya.

He alleged that under the Yogi Adityanath regime, upper caste people were enjoying their life, while backward castes and Dalits were struggling. “They say the elections are 80 per cent vs 20 per cent, but I say now its 85 per cent vs 15 per cent, 85 per cent hamara hai and 15 per cent me bhi bantwara hai (85 per cent is ours and there is division in 15 per cent too). BJP leaders say they will win on the Hindu card, then why did they try to play with the reservation given to Dalits and Backwards. Appointment letters were given to 19,000 general category people, when 69,000 appointments were Okayed. I want to know if Backwards and Dalits are not Hindu? If yes, then why did you give their reservation to others,” asked Maurya.

Further attacking the BJP, Swami Prasad Maurya said, “When I was in the Cabinet, there was a proposal that the posts should be filled with general category applicants without advertisement as there were no applicants from Dalit and Backwards communities. I strongly objected and the CM noted down my objection, but still he didn’t stop the proposal.”

“Now they are disinvesting and privatising the Central PSUs only to scrap reservation for the SCs and OBCs. When things will go to private hands there will be no reservation. Yogi ji, I want to say that you are committing a sin while sitting on the CM’s chair. Are only upper caste people Hindus in your eyes? If only those 10 per cent are Hindus in your view then your departure is definite. Now, all the Backwards, Dalits and everyone is against you. There will be further division in those eight to ten per cent with you as there are many Samajwadis and Ambedkarwadis in that percentage.”

“I thought after spending 14 years in exile, the BJP would have learnt its lessons, but it seems that once again they will return to what they were before 2017.