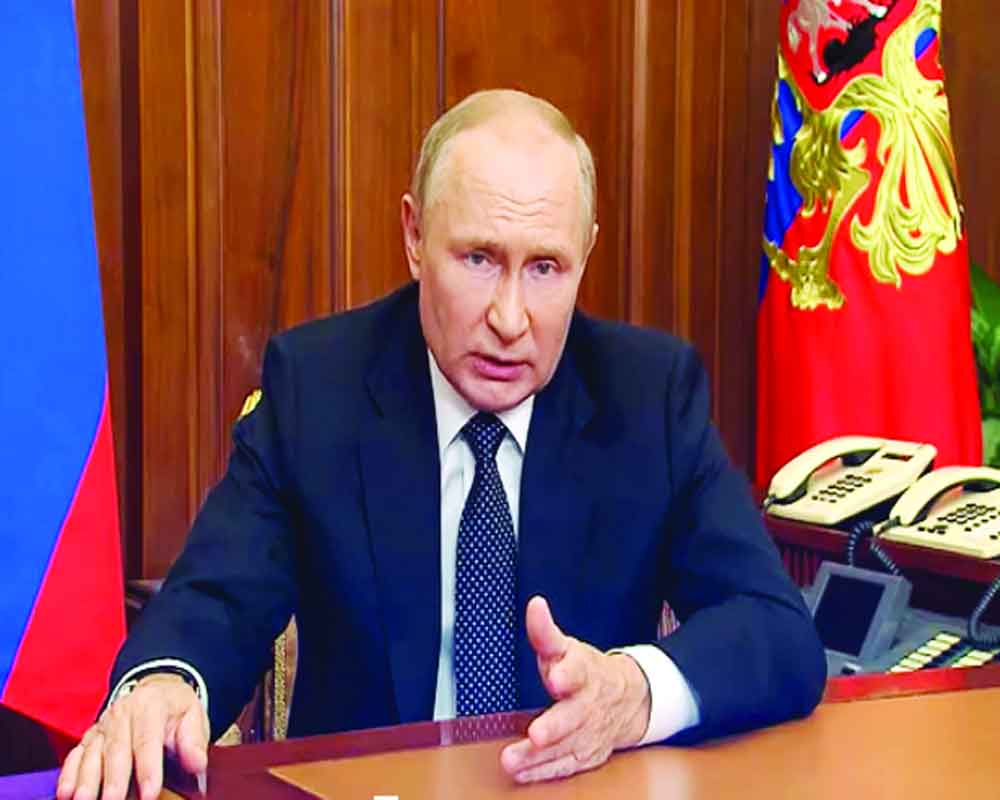 Russian President Vladimir Putin on Wednesday ordered a partial mobilisation of some 300,000 reservists after the Russian military suffered a series of setbacks in the raging conflict with Ukraine, saying the move was essential to protect Russia’s sovereignty as the “West is seeking to weaken, divide and finally destroy this country.”

Putin made the announcement in a televised address to the nation in which he also said that Russia will use all the means, including nuclear bombs, at its disposal to protect its territory, warning the West that “this is not a bluff”.

Ahead of his much-anticipated address, Putin had signed an Executive Order for the call-up to start the mobilisation immediately.

Since early September, Ukraine forces have swiftly recaptured large swaths of land in Ukraine’s Kharkiv region that Russian troops took over in early weeks of the war which began on February 24.

The stretched-out frontline, the constant shelling of Russian borderline areas by the Ukrainian military and attacks on liberated regions required the call-up of servicemen from the reserve, Putin said in his address.

His speech comes a day after the Lugansk and Donetsk People’s Republics, as well as Russian-controlled Kherson and Zaporozhye regions on Tuesday announced that they would hold referendums on whether to join Russia from September 23-27.

Soon after Putin’s address, Russian Defence Minister Sergey Shoigu announced that 300,000 people will be called up for service during the partial mobilisation.

“Three hundred thousand reserve troops will be called up,” Shoigu said during a Rossiya-24 TV broadcast.

Commenting on Putin’s announcement, US President Joe Biden said that Russia has “shamelessly violated the core tenets” of the United Nations charter.

In his speech at the UN General Assembly session, Biden said President Putin’s new nuclear threats showed “reckless disregard” for Russia’s responsibilities as a signatory of the Treaty on the Non-Proliferation of Nuclear Weapons. “A nuclear war cannot be won and it must never be fought,” he said.

Biden said this war is about extinguishing Ukraine’s right to exist and the US “will stand in solidarity against Russia’s aggression.”

Zelensky warned against being cowed by Putin’s threats, saying they would invite Russia to attempt to take more territory. The Russian president’s announcement showed he wanted to drown Ukraine in blood - including that of his own soldiers, Zelensky said.