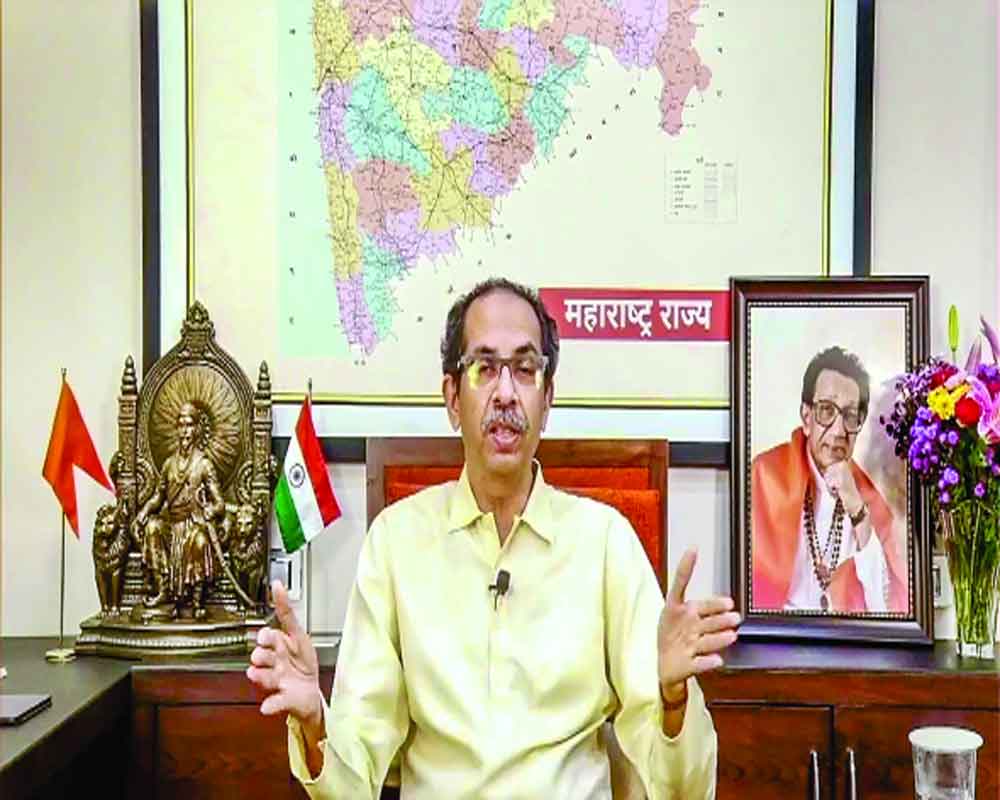 After 34 rebel MLAs submitted a signed letter to the Governor “re-affirming” that their leader Eknath Shinde “is and continues” to be leader of the Shiv Sena Legislature Party, Maharashtra Chief Minister Uddhav Thackeray said here on Wednesday that he was prepared to quit both his posts as the CM and the party chief if the rebels were to meet him and express their lack of confidence in his leadership.

Within hours after the rebel Sena MLAs, led by their leader Minister Eknath Shinde, flew from Surat to Guwahati by a special charted aircraft, a letter was submitted on their behalf to the office of Maharashtra Governor Bhagat Singh Koshyari, Deputy Speaker and Secretary of the State Assembly, declaring that Shinde continues to be the leader of the Shiv Sena Legislature Party (SSLP). The resolution that the rebel MLAs submitted to the Governor in the form of a letter carried the signatures of 34 rebel MLAs.

On part, Sena president and Chief Minister Uddhav Thackeray played an emotional card as he went live on Facebook and spoke to the people of Maharashtra, wherein he made it clear: “I have no greed for power. Nor would I remain stuck to the chair. Let the rebel MLAs come and tell me that I am not good enough to hold this position.  I will quit as both the Chief Minister and the party chief. You all know that despite my lack of administrative experience, my government performed extremely well during the Covid-19 period”.

In his first reaction TO the rebellion that has rocked the Shiv Sena after his number-two minister and senior party Eknath Shinde took away a group of 30-odd party MLAs, including three ministers, to a hotel at Surat in Gujarat, Uddhav said: “But why go to Surat or some other places to say this… He (Shinde) could have just come to me and talked to me as what he had in his mind. I would have quit my post immediately.”

Uddhav said that both NCP chief Sharad Pawar and Congress president Sonia Gandhi had supported right through and continued to support him. “But, what can I do if my own people do not want me to continue as the CM. I am ready to resign as the CM. Let the rebel MLAs come and tell me that they do not want me.

I will oblige them and quit the post. After my quitting the post, if someone else ( meaning Shinde) wants to take over as the CM can do so. But, I am opposed to the formation of another party”.

In a related development, the rebel Sena MLAs – at a parallel Shiv Sena Legislature Party meeting held at Le Meridien Hotel at Surat where they were camping till the time they left for Guwahati in the small hours of Wednesday – signed a resolution addressed to the Maharashtra Governor, Deputy Speaker, and Secretary of Legislative Assembly, re-affirming” that their leader Eknath Shinde “is and continues” to be leader of the Shiv Sena Legislature Party.

In the resolution signed by 34 rebel MLAs which was submitted to the Governor, Deputy Speaker and Secretary of the Assembly shortly before noon on Wednesday, the rebel Sena MLAs said that “there has been great dissatisfaction prevalent amongst the members of Shiv Sena and party cadre at large on account of corruption in the government. “Corruption by then Home Minister Anil Deshmukh (who is in Jail), and sitting Minority Minister Nawab Malik (who is also in jail for involvement with Underworld Don Dawood Ibrahim),” the letter stated.

“Apart from the above reasons, our party cadre faced tremendous harassment and distress on political as well as personal grounds from the Opposition Ideological Parties, who are now a part of the Government and were using their office and power to undermine the base and foundation of the our Shiv Sena cadre,” the letter stated.

In their letter, the rebel Sena MLAs also stated that “there is enormous discontent amongst the party workers for forming the government with NCP and Indian National Congress who are ideologically opposed to the Shiv Sena”

“There has been a compromise on the principles of our party Shiv Sena. For Last two and half years, our party and its leadership have compromised party principles by aligning with the contrasting ideologies for the sake of achieving power in the State of Maharashtra,” the letter read.

“The ideology of our party’s leader Late Mr. Balasaheb Thackray was to give clean and honest Government to the People of Maharashtra and also without compromising on the principle of Hindutva, which was defeated at the first day itself by aligning with the opposing ideologies,” the rebel Sena MLAs stated.

Alluding to the alliance reached with the BJP prior to the 2019 State Assembly polls, the letter said: “Shiv-Sena and the BJP had forged a pre-poll alliance for the 2019 Maharashtra Assembly General Elections. They sought the blessings of the voters for this Sena-BJP alliance which the voters accepted and voted in favour of this alliance. After the results were out the Sena severed its ties with the BJP and formed an alliance with the opposing parties which they had fought against in the 2019 Assembly Elections. This Act of our party leaders had a tremendous negative impact upon the voters and the party cadre at large.”

The letter claimed that the party leadership ignored the hues and cries against aligning with the NCP and the Congress and went ahead and formed a Maha Vikas Aghadi government. “For last 2 and half years, we, the Shiv Sena legislative party members, were facing tremendous pressure from their electorates/voters. We have also been subjected to a lot of criticism for being part of this corrupt Maharashtra government,” the letter stated.

In another resolution, the rebel Sena MLAs resolved that “Bharat Gogawale be elected and appointed as a chief whip of the 14th Maharashtra Shiv Sena Legislative Party (2019-2024). Appointment of Mr. Sunil Prabhu is cancelled with immediate effect”.

Earlier in the morning, upon his arrival in Guwahati from Surat  by a special charted aircraft along with the rebel Sena MLAs, Sena rebel faction leader Eknath Shinde claimed that he enjoyed the support of  40 Sena MLAs.

“Forty MLAs of Shiv Sena are present here. I don’t want to say anything but only that we will take forward the Hindutva ideology of Balasaheb Thackeray,” Shinde said.

Shinde and other Sena rebel MLAs were received at the Lokapriya Gopinath Bordoloi International airport by a BJP state minister and a MP who escorted them to a private hotel.