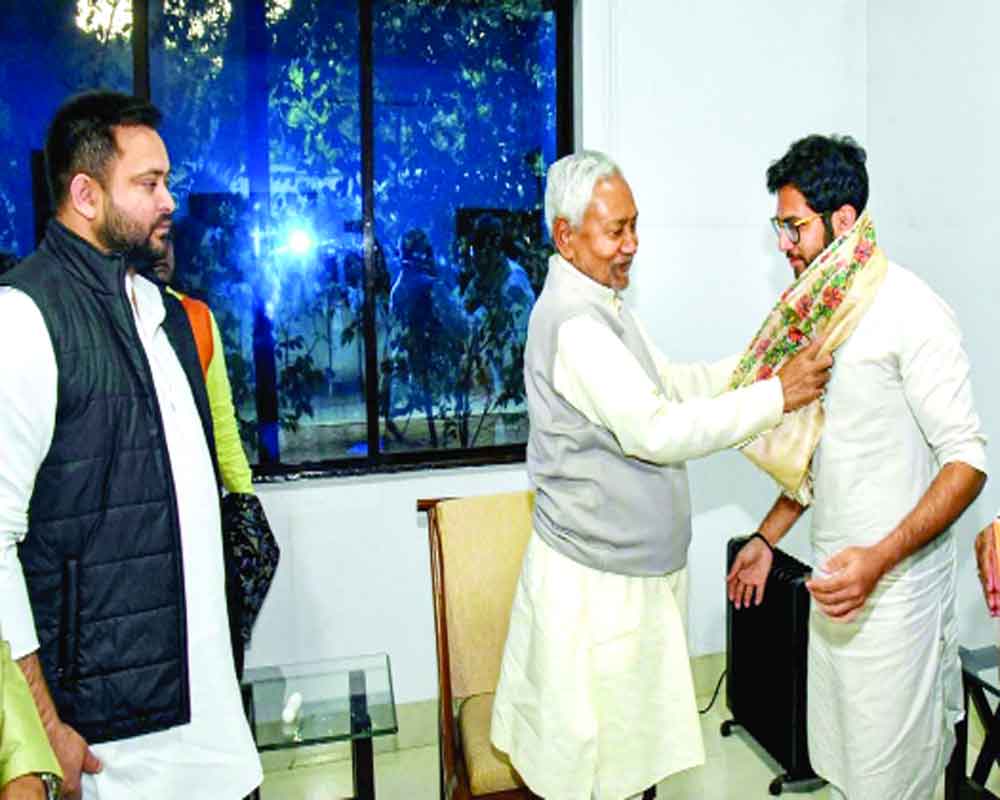 Aaditya , who was on a one-day visit to Bihar, was accompanied by Tejashwi when they called on Kumar at his residence. Aaditya’s decision to call on Kumar and Tejashwi is seen as a clever move to influence millions of Bihari voters residing in Mumbai and whose support will be crucial for Shiv Sena (Uddhav) in the upcoming BMC elections.

The BJP has already started a campaign to woo the North Indian voters.

Addressing the media after the meeting, Aaditya said, “We’ve been in touch with each other but could not meet due to Covid. We discussed various topics but did not discuss politics. Sure this friendship will continue.”

Aaditya sought to distance himself from the strident “anti-migrant” stance that the Shiv Sena, founded by his late grandfather Bal Thackeray, has often been accused of.

The Shiv Sena (Uddhav) leader and former Maharashtra Minister, whose first trip to Bihar intensified the buzz around “Opposition unity”, claimed that those who have been hostile towards the Hindi-speaking north Indians were now “with the BJP” and asserted that all communities had “co-existed peacefully when we were in power in Maharashtra”.

He said price rise and unemployment are major challenge and it is time that youth leaders come together to address the situation across the country due to the poor governance of the BJP.

“The current challenge is to save the law and the democracy and we will do anything to save it,” said Tejashwi after meeting Aaditya . Tejashwi presented the Aaditya  with books based on the life of his father and RJD president Lalu Prasad and the entire delegation with Mithila paintings.

BJP criticised the meeting between Tejashwi and Aaditya on planks as varied as insult to the “greatness” of Bal Thackeray and insensitivity to Bihari sentiments. Tejashwi hit back, claiming that the BJP was rattled by “Opposition unity”, which has been achieved in Bihar and was taking shape in other states.

“Late Bala Saheb Thackeray was a pious soul. He must be turning in his grave to learn what Aaditya, his grandson, is doing. What does the young leader expect to learn from Tejashwi who has accomplished little except amassing huge wealth in a short period of time?” said Jivesh Kumar, a former Bihar Minister and BJP leader.

RJD spokesman Mrityunjay Tiwari responded to the BJP’s tirade saying “it is Aaditya who is coming all the way to meet Tejashwi, and not the other way round. It shows the stature of our young leader and, indeed, is a matter of pride for Bihar, which has shown the way to all anti-BJP forces”.

“The BJP should remember the abominable attitude of its leaders in states like Gujarat from where migrant workers were compelled to flee during the Covid lockdown. The aggrieved Biharis are going to punish the BJP, which also rules the Centre, in the next Lok Sabha polls,” Tiwari added.