Centre ‘hoodwinking’ its own people with jumlas: Congress

Centre ‘hoodwinking’ its own people with jumlas: Congress 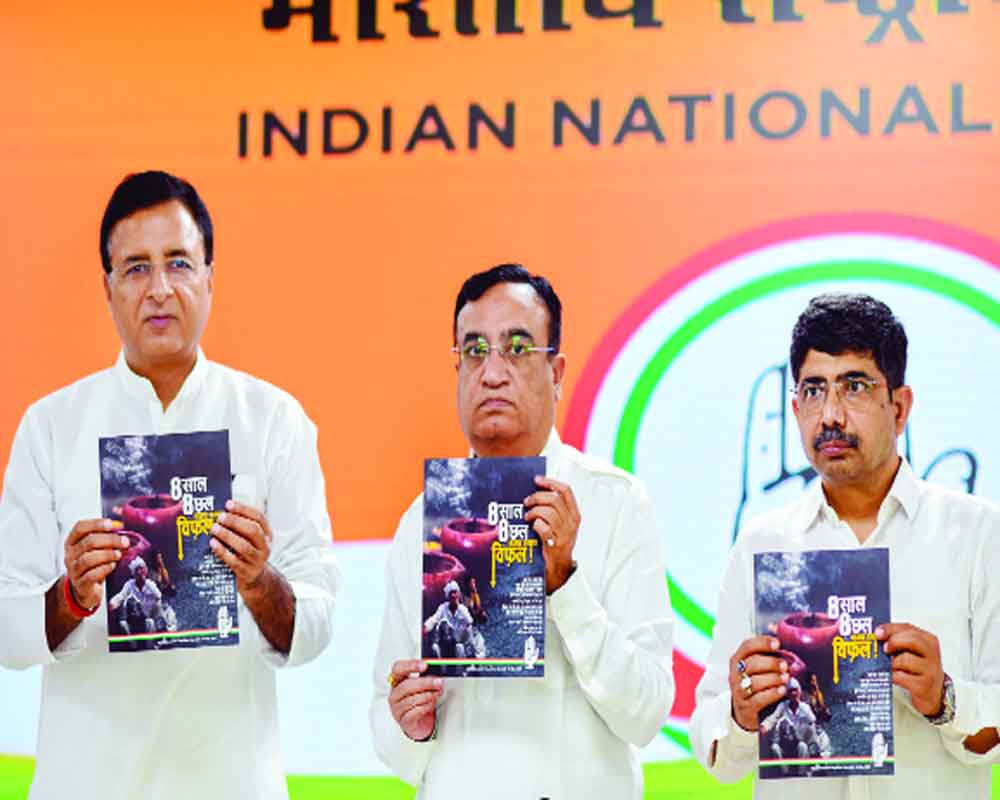 The Congress on Thursday attacked the Modi Government on its eighth anniversary alleging that this period has been marked by misery and misgovernance with high inflation, low employment and communal polarisation being the hallmark. The party alleged that the promise of “achchhe din” made to people has only turned out to be “achchhe din” for the BJP and a select group of crony capitalists and industrialists whose wealth has increased manifold.

The Congress also released a booklet in Hindi “8 saal, 8 chhal, BJP Sarkar Viphal” (8 years, 8 deceits, BJP government failed) to highlight, what it called, the “failures” of the BJP Government on various fronts.

Addressing a joint press conference here, Congress chief spokesman Randeep Surjewala and former Union Minister Ajay Maken claimed the BJP Government has broken all records of “hoodwinking” its own people with fake “jumlas” and slogans during its eight years of rule. Maken also invited the Prime Minister to come out and debate with facts to counter the claims of “failures” made by it against the BJP Government.

He should first debate with us and can later debate with our leader Rahul Gandhi, he said.

Asked why the claims made by the Congress were not bearing any fruit during elections, as the BJP continued to win them, Maken said the Congress is raising issues like a strong and alert Opposition and both election results and Opposition activeness are two different things.

“We are fulfilling our responsibilities and as far as better performance in elections is concerned, we have taken some decisions at the party’s Chintan Shivir in Udaipur and expect better results in the future. You will see better functioning of the Congress in coming times, but highlighting the failures of the Government is very important,” he said, urging the media to take its message to the masses.

Maken accused the BJP of garnering votes in the name of bravery of soldiers but did not even recognise their services by giving them one rank, one pension as was promised by the previous Congress-led UPA Government. Accusing the BJP of spreading hatred in society through communal polarisation, Maken alleged that 10,000 cases of communal clashes have taken place during the last eight years of Modi Government.

Surjewala said the slogans given by the BJP ahead of 2014 polls are now being assessed by the people of the country as all have proved wrong. He cited several such slogans given by Modi to attack the previous UPA Government on issues of price rise, unemployment, economy, deteriorating value of the rupee and on India’s sovereignty and integrity and said “all those slogans, promises and “jumlas” highlight the failures of the Modi government”.