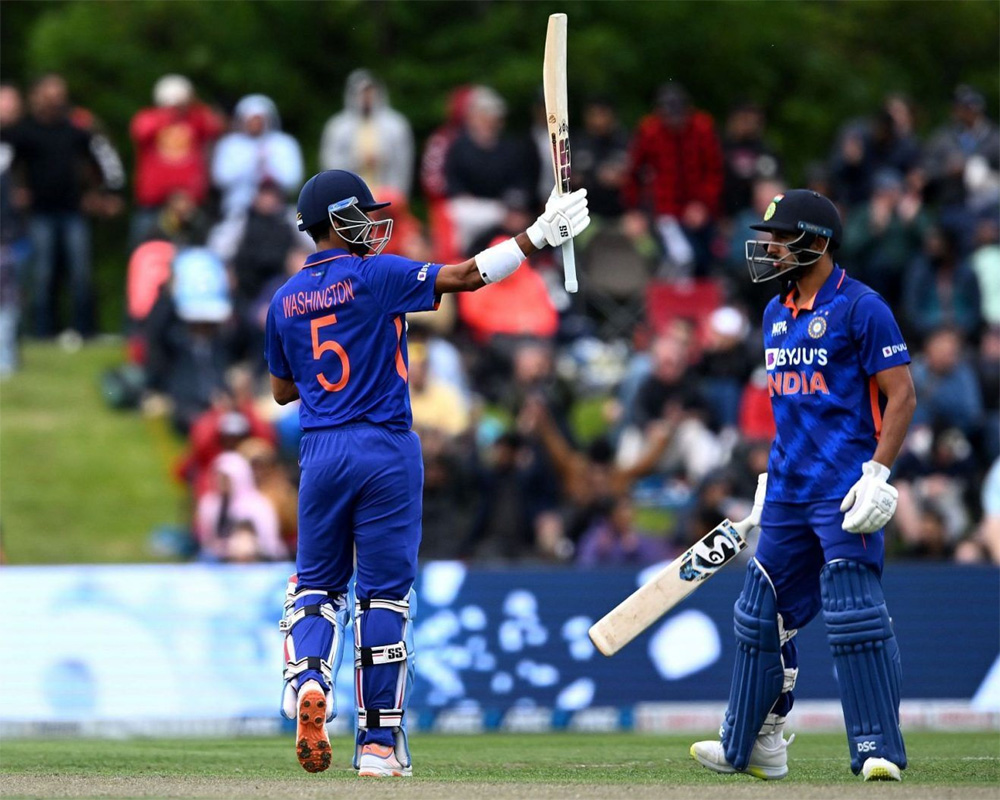 Indian batters showed lack of application as Adam Milne led New Zealand's fine bowling show to bundle out the visitors for a paltry 219 in their must-win third and final ODI here on Wednesday.

Battling to save the series, India found themselves in a spot of bother, losing half of the side in 25.3 overs.

The spin bowling all-rounder, who showed his mettle with the bat with a 37 not out from 16 balls in India's 306 for 7 in the first ODI, anchored the show after Shreyas Iyer (49) failed to convert his start.

He became the last wicket to fall as India, who trail the series 0-1, folded in 47.3 overs.

Making a comeback after sitting out of the rain-abandoned second ODI, Milne (3/57) rattled the Indian top-order, dismissing skipper Shubman Gill (13) and Shikhar Dhawan (28).

He then grabbed the prized scalp of Suryakumar Yadav (6) after changing the end to expose India's sloppy batting in the middle overs.

Among the designated batters, only Iyer looked in supreme control and played some delectable shots before being dismissed by a well-judged forward-running catch by Devon Conway of Lockie Ferguson's bowling.

Iyer hit eight fluent boundaries during his 59-ball knock but fell one run short of a well-deserved fifty as India looked in deep trouble, losing half of their side for 121 runs.

Kane Williamson stood out with his captaincy and cleverly rotated his bowlers. Fifth bowler Daryl Mitchell also returned with three wickets (3/25), while Matt Henry (10-2-29-0) was economical and pace spearhead Tim Southee returned with 2 for 36.    Asked to bat under overcast conditions, India had a slow and cautious start.

Gill, who looked fluent in the first two ODIs, curbed his stroke making instinct and was five off 18 balls, while his senior partner Dhawan looked to attack.

Dhawan stepped out to Southee with disdain for a six in the third over but the bowler bounced back with a maiden in his next over. Henry, on the other end, was at his tidy best.

Slowly the Indian openers began to break free towards the end of powerplay.

Gill began scoring with successive fours off Milne, but soon lost his patience and chipped one to the square leg for a soft dismissal in the next ball.

Desperate to step up the run-rate, Dhawan played on to become Milne's second victim.

Having taken T20 cricket by storm, Suryakumar failed to spend time in the middle when it demanded and became Milne's third scalp.

Deepak Hooda, who retained his spot despite criticism surrounding Sanju Samson's axe in the second ODI, failed to impress yet again and got out for 12.

After Iyer failed to convert his start, India were in desperate need of a partnership with Sundar and Hooda in the middle.

But Hooda never looked in control and fell to a Southee rising delivery down the leg side.

The match got off after a 10-minute delay due to a drizzle but no overs were lost.