Bharat’s Resurgence— Issues that must concern us

Bharat’s Resurgence— Issues that must concern us 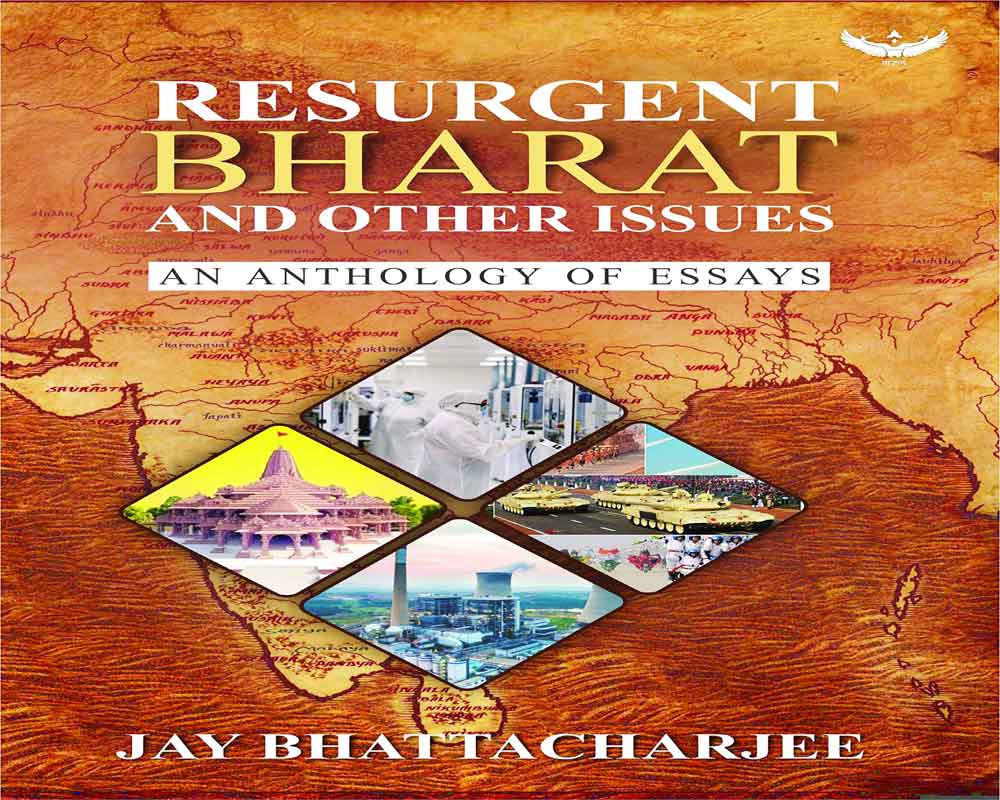 A compilation of articles in which the author takes on Lutyens Zone’s toxicity, demographic subversion of democracy and other issues, with a huge dose of satire

Post-1947, India took a road that defies explanation. For a country as old, culturally rich and diverse, as deeply rooted in her own civilisational ethos as India, it is strange that we became beholden to our colonial tormentors, against whom we fought tooth and nail for freedom. Coming out of nearly eight centuries of colonial rule, our first instinct should have been to do away with the vestiges of the tormentors of our Motherland—immediately. The reverse happened.

The only explanation, then, for this unfortunate turn of events is that our colonial masters left behind an elite coterie, with tentacles spread far and wide, which knew how to cling to power, exploit it to perpetuate themselves; civilisation, culture, and heritage, of course, be damned.

Jay Bhattacharjee’s book, Resurgent Bharat and Other Issues: An Anthology of Essays, published by Garuda Prakashan, among other things, underlines this with unwavering precision. “Witty, Acerbic, Irreverent” is how A. Surya Prakash, former Chairperson Prasar Bharati, who has written its Preface describes these articles.

The book is a collection of articles, written over a period of nearly four decades beginning in the late 1980s, that appeared in different newspapers like The Business Standard, The New Indian Express, The Pioneer, and in several other portals like Niti Central, India Defence Review and others.

Relentless and unsparing, the author lays bare the entire intellectual, political and educational anatomy of this elite, whom he describes as “Sarkari Secularists”, “the (people with) Gungadin Syndrome” and “secularist stormtroopers”. Their educational excellence is encapsulated in terms like “Billy Bunter, Enid Blyton chi chi club of Gungadins” and “lifelong members of the Macaulay Fan Club”. An entire section, “Lutyens Zone’s Toxic Lobby”), is dedicated to them.

The author’s dissection of this elite is enlightening.

Sample this: “The Lutyens Zone mafia have in their fold the media honchos (particularly in the English MSM), the jholawallahs from all over the country, the Muslim-Christian clergies, the erstwhile comrades who are now confined to two backward enclaves of the country, and assorted “intellectuals” from universities, academic/research institutions, and other talk shops, especially in the JNU and other similar cesspools. The other large component in the Lutyens Zone cabal is made up of the beneficiaries of the loot and corruption of the Indian economic system that was designed and run by the GNG trio.” For starters, GNG stands for Gandhi-Nehru-Gandhi trio in author’s ‘lingo’. The second characteristic of this gang, writes the author further, is: “… their visceral animosity to this country’s ancient culture and civilisation.”

Identifying this power-brokering, sap-sucking elite is important if one were to understand how these anti-Indian forces replaced what India was, with their own fake, foreign-funded ‘idea of India’.

Without mincing words, and with dollops of satire, the author fearlessly takes on various other institutions and issues: The judiciary, the babudom, and one-rank-one-pension (he chastises the government for dithering on the same; it was granted later), the shenanigans of the corporate and international politics. There is also a crisp study of Nehru-Subhas Bose contrast, that makes it clear why these two were poles apart, even though they started off from similar backgrounds. The book also tells you about the first all-women military contingent in recorded history—it was Rani Jhansi Regiment of the Indian National Army.

Another relevant and grave issue, explained in detail by the author in his articles, is the demography impacting—and subverting—democracy. “… a simple motor trip along the national highways in western UP will show you… that large swathes of land have been bought over by Muslims with funds from undisclosed sources. Indeed, UP, Kerala, West Bengal, parts of Bihar, Tamil Nadu, Karnataka and Maharashtra are seeing a replication of the Sudetenland phenomenon in pre-war Czechoslovakia…” writes the author in one of his articles. [Emphasis by the reviewer.]

For the uninitiated, Sudetenland phenomenon, the author writes, is basically this: In 1938, Nazi Germany financed the terrorist violence of minority Sudeten Germans in the Western regions of that model democratic country (Czechoslovakia)… to destroy it. “A minority that works from inside to destroy a federal country can also be a linguistic/ cultural one and not necessarily a religious one,” writes the author. Can anything be more relevant in modern India’s polity?

Citing international law, and not jingoism, the author unequivocally defends India’s right to “… self-defence against an imminent or actual armed attack by non-state actors. Such attacks can be one-off or a series of attacks that have a clear pattern.”

Professionally from the corporate sector, the author’s sharp eyes miss nothing, and he has the necessary firepower in his arsenal of words to bring out the ironies, using the sledgehammer of humour to make his point.

The article detailing the author’s plight when he questioned a person sitting in a car with a red beacon on a Delhi road, as to whether he (the occupant) was entitled to use it, is an eye-opener. The occupant was a Delhi High Court judge; and, before the author could reach home, the police were waiting for him. Laughable today, but one can only imagine the author’s condition that night. How the author managed to escape the wrath of the honourable offended justice makes one chuckle. But it also shows how this elite category thrust upon themselves a disproportionately unjustified sense of entitlement. Separately, the author has also penned an article “An Ode to the Lal Batti”. Apart from the important point it makes, the readers should also read it for lilting humour.

In the section “Humour and Satire”, the author gives a glimpse of his command over satire when he chronicles “Begum Mawmota Banerjee’s England Bheejit”—in Bonglish. There are other rare gems of satire, literally a dying art in today’s hotchpotch of Hinglish mixed social media lingo.

Importantly, the book chronicles, by and large, a period that has seen India change. From an economy wallowing in scarcity, to an India that celebrated a ‘consumption-based economy’, through to an India, where Bharat, finally, seems to be waking up from its giant slumber—there are things to be celebrated, but the challenges are daunting too. And they all find a place in this book.

In the Foreword of this book, scholar Bharat Gupt, says: “Jay Bhattacharjee issues a clarion call to his readers and to a wider audience that our ancient civilisation is on the cusp of a giant leap forward. A failure at this juncture would be cataclysmic.”

Therefore, RESURGENT BHARAT  is as much for the members of Gen Next (or whatever may be the latest nomenclature), as it is for those who have been there, done that. The issues raised in this book should be matters of concern to all the Bharateeyas.

( The reviewer is a former journalist)