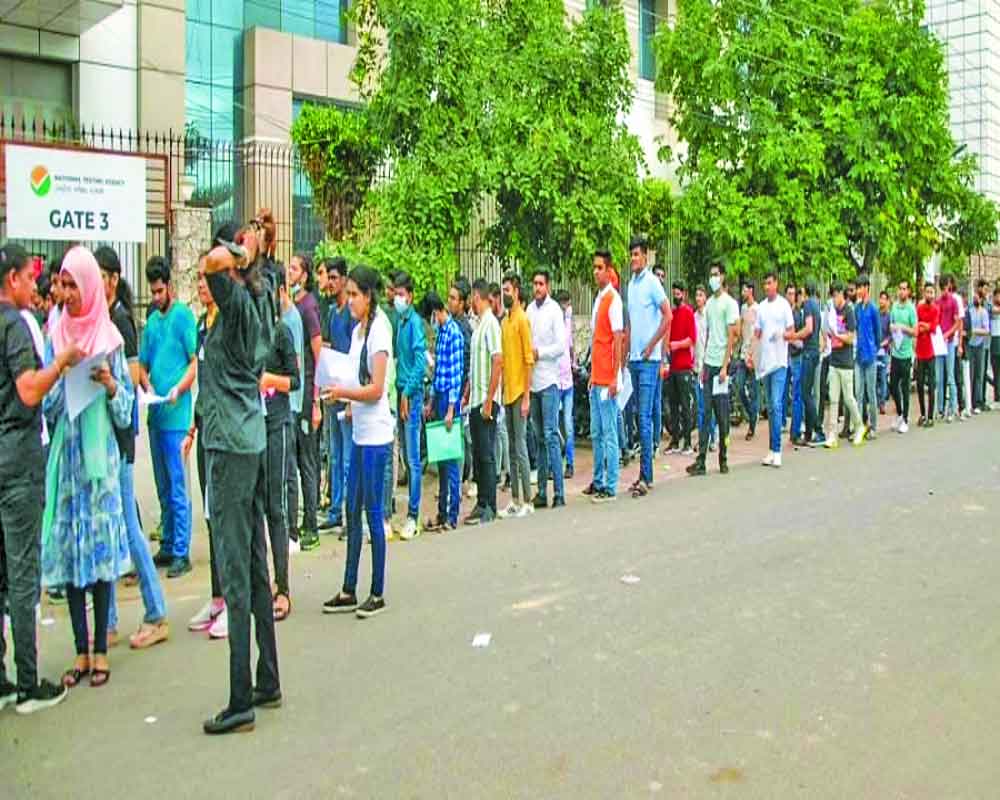 A nation infatuated with IITs and AIIMSs makes it difficult for the vast majority of students to seek a degree in a field other than engineering or medicine. Yet, students who are unable to acquire admission to either tier II or tier III institutes often end up enrolling in a non-technical degree course. So, what we are seeing in the form of the Common University Entrance Test (CUET) — a homogenised objective test — is nothing more than the fallout of that fixation where the students could be evaluated on a similar standardised test.

In an academic environment where near-perfect scores are the norm rather than the exception, the introduction of CUET to decide students’ eligibility for university admission is a much-needed initiative. However, if the proposed entrance exam is going to be based on Multiple Choice Questions (MCQ) test, I am afraid it would only result in mushrooming of more coaching centres to prepare students for university entrance test.

Testing a student’s suitability, particularly for liberal subjects, necessitates a comprehensive evaluation. Therefore, this test cannot be solely dependent on multiple-choice questions. When a candidate is expected to employ her critical and argumentative acumen during the course, testing her ability to memorise facts and information is never a good idea. Hence, the assessment should ideally be a blend of both objective and subjective questions, done in stages (preliminary and advanced). The intention behind having an advanced stage consisting of subjective paper is to assess the applicants’ linguistic, critical, and analytical skills.

This is important because the purpose of higher education is much more than just creating high paying job opportunities for students. Quality education has an inherent responsibility to play an enabling role in personal accomplishment, constructive public engagement, and productive contribution to society. The broader objective is to engage faculty and students with local communities to learn a thing or two about real-world problems while functioning in collaborative, inclusive, and cross-disciplinary ways.

In liberal education, exploration is not just a whimsical luxury; it is a central benefit. Learning stuff is of secondary importance than learning about oneself, the emphasis is on developing all capacities of a human being — intellectual, physical, emotional, aesthetic, and moral — in an integrated manner.

There are no entry barriers to pursuing a graduation degree in India. Anyone who can afford the fees can obtain the degree with minimal effort. As a result, we keep producing graduates who lack any employable skills. According to the most recent data from the periodic Labour Force Survey (20-21), only 13.8 per cent of Indian youth are vocationally trained. In comparison to Germany’s 75 per cent and the United States’ 50 per cent, this is woefully inadequate to reap the benefits of demographic dividend.

And we can’t blame anyone but ourselves for this complete mess. We live in a country where everyone wants to secure a limited number of white-collar jobs by acquiring a college degree. The vast majority of them are academically challenged, but they don’t mind crowding colleges and universities.

Against this backdrop, it makes more sense for us to borrow a leaf or two from the US education system, where cost and academic talent are major barriers to acquire a graduate degree. The obvious advantage of this type of ecosystem is that a large number of students do not qualify for a degree course. And these students eventually go on to pursue industry-related specific skill upgradation via diploma or certification — making them qualified for blue collar jobs.

However, there is a widespread aversion to blue collar jobs in India. Despite the government’s numerous policy initiatives to connect schools to ITIs and polytechnics, the number of trained people being absorbed in industries is not encouraging.

Unless we can prepare academically average students for decent industrial opportunities, this lot of students will continue to graduate with no skill set.

Therefore, the need of the hour is to create a better entry barrier to degree colleges while also imparting industry relevant courses at ITIs and Polytechnics.

Furthermore, there is an urgent need to distinguish the concept of wellbeing from wealth. In the absence of this fundamental distinction, people invariably choose wealth over wellbeing.

A generation raised on the yardstick of Instagram filter has its own challenge of accepting their inherent flaws.

Making peace with the fact that someone might not be intellectually gifted to make a dent in the academic or business world is a first step towards exploring possibilities in life.

And you never know how this exploration could prove to be a gateway to a life worth living, where you can strive to be someone who offers meaning to things rather than someone who seeks meaning in things.