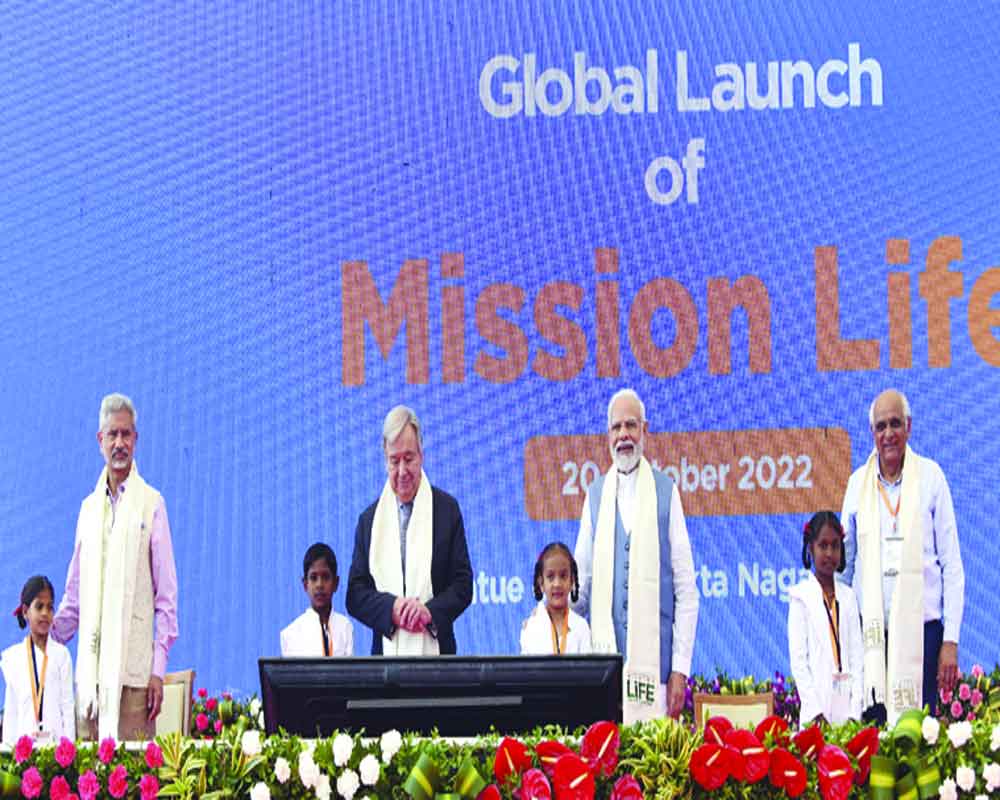 Of late, discussions around the greenhouse gases have become very important in the context of climate change and global warming. Several developed and developing nations have already declared or are in the process of firming up the timelines to achieve “net zero” emission with regard to the greenhouse gases.

The term “net zero” indicates a scenario where a balance between the greenhouse gases released into the atmosphere and that removed from the atmosphere by various means (including capture) is achieved. Although such a situation is highly idealistic, wholehearted efforts are needed from all the advanced countries to make meaningful progress. At the same time, it is imperative that different countries firm up different timelines in this regard, based on the current level of preparedness and more importantly the access to the necessary resources.

In the United Nations Climate Change Conference (COP26) held between October 31 and November 12 in Glasgow last year, India promised to reduce its emissions to net zero by 2070. China announced plans to attain carbon neutrality by 2060, while the US and the EU declared their goals aiming to reach net zero by 2050.

India recently updated the first Nationally Determined Contribution (NDC) under Paris Agreement (2021-2030) declared earlier in 2015, and communicated the revised NDCs to the United Nations Framework Convention on Climate Change (UNFCCC) in August 2022. The revised version clearly articulates India’s key internal goals towards achieving “net zero”. The country aims “to adopt a climate friendly and a cleaner path than the one followed hitherto by others at corresponding level of economic development”. India also has committed “to reduce Emissions Intensity of its GDP by 45 per cent by 2030, from 2005 level”. Further, the country aspires to achieve “about 50 per cent cumulative electric power installed capacity from non-fossil fuel-based energy resources by 2030”, which will involve transfer of technology from the advanced nations and assistance of low-cost international finance, including Green Climate Fund (GCF).

Since attaining the goal of a global transition such as the net zero is going to be gigantic and will have large-scale impact on the global economy, the sustainable pathways towards achieving the over-arching targets needs to be charted out.

Such a transition has many dimensions involving technological, environmental as well as socio-economic nuances which pan out differently in a country-specific manner. Therefore, any country should be cautious and pragmatic before envisaging a disruptive change in the incumbent infrastructure, and a system view approach needs to be adopted to understand the impact of the changes in an integrated manner.

From the latest NDC, it is quite evident that India’s approach towards addressing “net zero” is heavily reliant on the “Green Energy”, aimed primarily at reducing the CO2 emissions. It is noteworthy that in 2021 the power sector alone accounted for 49 per cent of the total CO2 emissions in India.

On the other hand, India’s transport sector contributes to 13.2 per cent of the country’s total CO2 emissions, of which more 90 per cent emissions can be attributed to the road transport sector alone (comprising both passenger and freight transport).

Thus, the country is looking for measures to reduce CO2 emissions from these two sectors. While the renewable energy sources such as solar photovoltaic (PV) and wind energy are being high priority among the various non-fossil energy sources, the electric vehicles (EVs) have been enjoying strong push through several government support schemes and e-mobility is often touted as the mainstay towards achieving a green and sustainable transport sector.

The key issue that is often overlooked while creating the aspiration-driven larger pictures is the availability of resources. To be more context-specific, the availability of the critical raw materials that go into the manufacture of the critical components for the key “green energy” systems and “green mobility” products needs to be identified as the priorities. The intermittencies in variable renewable energy (VRE) sources necessitate the use of grid-scale storages (batteries).

Batteries are also needed for the EVs. Critical materials that are used in the batteries are lithium, cobalt and nickel. The price of cobalt increased from approximately $32,000 per ton to $70,000 per tonne during January-December in 2021, while the price of lithium increased by more than five times in 2021. The price hikes are expected to continue in the near future.

Therefore, the aspiration for the large-scale green transition needs to be revisited periodically to have relook at the priorities and to chart out the most viable trajectory for the transition to a cleaner future.

Further, the new norms brought forth by the Bureau of Energy Efficiency (BEE) have enforced the heavy consumer durables to become energy-efficient. Two “white goods” that have great market potential in India are the room air conditioners (RACs) and the laundry washing machines (LWMs), since both of them have a much lower level of market penetration as compared to the refrigerators.

The energy-efficient RACs and LWMs necessitate the use of Rare Earth (RE) permanent magnets in their motor architecture because of their superior performance as compared to the ferrite counterparts. Currently, all the motors and magnets used in the air conditioners, washing machines, and EVs are imported.

The industrial capabilities related to manufacture of RE permanent magnets and customised motors for the “white goods” and EVs are currently absent in India. Creation and sustenance of an industrial ecosystem would require right incentives, uninterrupted availability of the critical RE materials used in the magnets, and demand for the indigenous products.

Availability of critical materials, smooth technology transfer, creation of industry are intricately linked facets of the green energy aspiration of the country. Integration of all these elements will need active intervention from the government and suitable financial arrangements need to be arrived at through close interactions with the industry.

Once the priorities are decided, it would be pragmatic to adopt a business-oriented hybrid model that combines both top-down and bottom-up approaches involving company-level information from relevant segments. Only then the true spirit of “AtmaNirbhar Bharat” and “Make in India” can be realised in a synergistic manner.