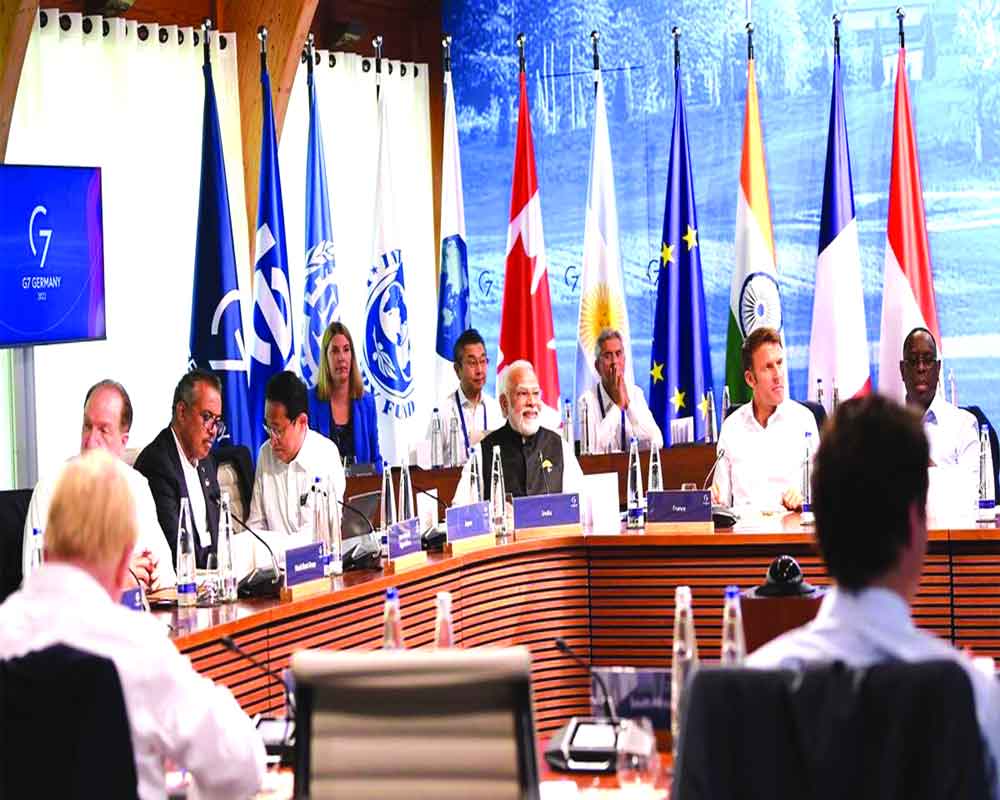 “India has been invited to G-7 underscoring the country’s growing geostrategic role in the world…As the world enters this dangerous new era, India could be the deciding factor, so no matter where you are in the world, the choices made in New Delhi mattered.”

Post-Independence India was known for its idealistic foreign policy: The famous “non-alignment”. Did it best serve the Indian interest at the time? Did India receive the support of the international community on Kashmir, and China or Pakistan wars? Under Indira Gandhi, India’s diplomacy turned realistic; if the Indian help in the Independence of Bangladesh was a smashing success, alienating the US was the cost.

Afterwards, hitherto foreign policy can be defined more by its passivity, accomplishments rather erratic; marked by the lack of a long driven, well-planned, sharply strategised, clear eyed, crisply defined policy. The advantages India accrued had more to do with its geo-strategic and economic position and lesser with astute diplomatic haggle. Outcome: India could never punch above its weight in the geopolitical arena, and thus spoke from a position of weakness, feigned helplessness towards its two hostile neighbours, and consoled itself as a “soft power”.

Post the surgical strikes in Pakistan, Galwan clashes and standing up to the Western pressure over trade with Russia, every single world capital knows that India is no longer just a “soft power”. With missions like Vande Bharat and Operation Ganga, India has proved its capability and commitment to safeguarding every one of its citizens abroad. From dealing with Taliban to handling Sri Lankan economic collapse, India’s diplomacy has proved that it is nimble-footed and ready for any challenge. India is a major strategic player in the fast-changing, unpredictable and turbulent geopolitical landscape of our times, courted and respected by all. Even in its difficult neighbourhood, India has been able to bring about a sense of stability in its relations with smaller neighbours, which are being seduced by Beijing to no end; emerging as a reliable and most dominant player.

It took the Modi Government’s advent at the helm to replace the “non-alignment” with “multi-alignment” or “strategic autonomy”, what that has broadly translated into is a wider alignment with Washington, and adoption of its China containment Indo-pacific policy, without surrendering autonomy over other issues, like relationship with Russia; and creating strategic issue-based convergences with different nations, including China. Today, the Indian foreign policy is one of the sharpest, clearly, boldly and assertively driven by its own national interest, capable of withstanding big power pressure tactics.

“In this world of all against all, India’s goal should be to move closer towards the strategic sweet spot,” said S Jaishankar in his book “The India Way: Strategies for an Uncertain World”.

The present foreign policy couldn’t exist without either of its two main pillars: Prime Minister Modi and Foreign Minister S Jaishankar — the dexterous ball jugglers, the risk-takers, the realists — whose personal qualities, coherent ideological moorings and shared ambitious vision of India’s place in the world, have been essential for the effective construct and execution of the present policy. The main objectives of the foreign policy today are: Changing India’s image in the world, creation of partnerships on equal terms with generosity towards smaller nations, proactively shaping the global agenda and big issues, actively exploring and leveraging foreign relationships for domestic development, creating people-centric foreign policy and use of Indian culture and thoughts in influencing international initiatives and discourses.

Deft balancing of nations and alliances hostile to each other is one of the greatest accomplishments of the Indian diplomacy. Engaging influentially in QUAD, BRICS and G-7 summits and developing understanding of Indian position on Ukraine by all of India’s partners; India today is a singular nation that buys S-400 missiles and oil from Moscow while maintaining historically closest ties with the Washington and other QUAD partners. Even to the envy of US, India has cultivated intimate relations with the Gulf nations (especially UAE) and Israel while preserving good terms with Tehran.

The proactiveness of Indian foreign policy is visible in conducting first-ever summits of: International Solar Alliance, Summit with Central Asian nations, Summit with Pacific Island nations and India-Nordic Summit. India is shouldering global responsibilities by supplying vaccines and medicines to the world amid pandemic, providing humanitarian help to Ukraine and supplying wheat to needy nations.

The quintessential Modi style of diplomacy is to have a great personal rapport with the leaders of other nations, which paid off dividends when he rang up Putin and Zelensky, rescuing Indian students stuck in Ukraine’s crossfire.

Successfully standing up to Western moral supremacy is another significant development in the Indian diplomacy: For the first time the Indian foreign policy establishment has alluded, that no nation is entitled to sit as a judge over others when it comes to human rights. Samantha Power, administrator USAID, on her recent visit to India, spoke of the divisive forces in “US and India”.

The Ukraine war is a reminder of the lesson that success in a conflict depends not just on economic and military power of a nation but also the number of its friends. Between India and China, that could be a deciding factor. While China is out losing friends and credibility, India’s actively building and strengthening alliances and deepening bilateral engagements. Apart from joining QUAD, I2U2 and Indo Pacific Economic Framework, India is also reinvigorating BIMSTEC.

The alliances are not just for hedging security concerns for future, but are actively pursued to serve national interest at present, like setting up of “integrated food parks” and renewable energy projects in India by I2U2 partners, supply chain resilience initiative with Japan and Australia, signing critical defence technology transfer pact with US, receiving US investment and technology in crucial areas, selling missiles to Vietnam and Philippines, signing FTAs with UAE and Australia, Japanese partnership in infrastructure, technology, innovation and startups and undertaking projects in collaboration in third countries in South Asia and Africa, exponential increase in Indian-Israel defence cooperation and collaboration in developing next generation technologies, France’s active collaboration in “Atmanirbhar Bharat” in defence projects.

Investment by UAE in J&K, India’s plans of holding the G-20 summit in 2023 there, passing the torch relay for the 44th Chess Olympiad through Srinagar, is how India is utilising foreign engagements for furthering its security and territorial sovereignty goals.

In the words of Jaishankar, “India is reclaiming its space in the world today as a civilization”, “as a power that can bridge divides”. Utilising this effective foreign policy for economic progress, would require systemic transformation of economic ecosystem. Does India possess the capability and discipline to become a global power and not just a regional one, resolve global disputes and create global narratives? Only time will tell.

(The author is a foreign policy expert and a lawyer)