Land of the Bhagvad Gita

Land of the Bhagvad Gita 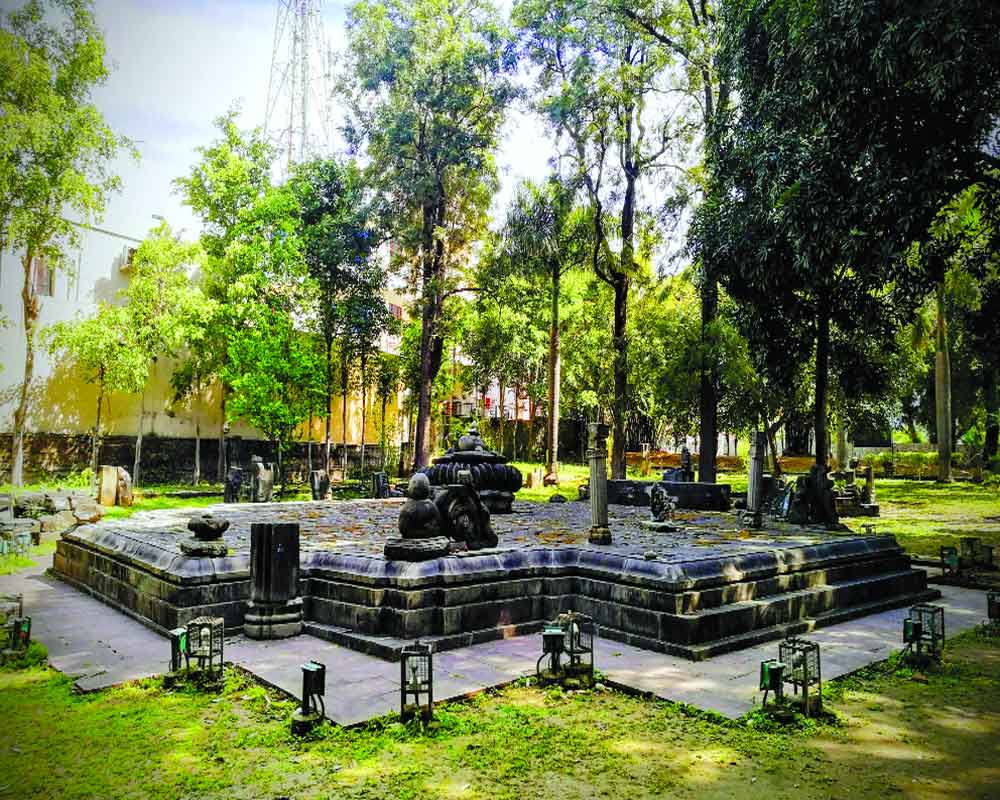 Literary tradition speaks of Kurukshetra not merely as a single place or site, but rather as a sacred and religious landscape extending beyond the present city, writes  Susan Mishra

Haryana--- Hari + Yana meaning the abode of Hari/Vishnu--- is provenance of the Bhagvad Gita or the Song of God/the divine song, the golden words of philosophy uttered by Shri Krishna on the battle field of Kurukshetra. The Bhagvad Gita occupies an exalted position in India's culture and its philosophical precepts have gained much acclaim worldwide. In the text Kurukshetra is described as Dharmakshetra,, the field of righteousness and in a collection of hymns of the Maitrayani Samhita, Kurukshetra is first mentioned by name as a place of divine sacrifices. In mythology, the name Kurukshetra applies to a circuit covering over 100 kilometres with an abundance of holy places, temples and tanks, connected with ancient Indian traditions.

Literary tradition speaks of Kurukshetra not merely as a single place or site, but rather as a sacred and religious landscape extending beyond the present city. This long held association with the Epic and Vishnu worship is not merely a myth. Archaeological and inscriptional material from Pehowa, Thanesar, Rohtak and Gujjar Kheri have unveiled a vast, ancient and rich religious landscape.

A journey from Delhi to Kurukshetra and thence Chandigarh reveals numerous sites of ancient Hindu temples and remains. In the context of Hindu remains, the most well-known site is Surajkund, a 10th century CE stepped water tank, the banks of which once had a temple dedicated to Surya. Undoubtedly, it would seem that many other temples must have existed in Haryana, clues to which are found in archaeology and inscriptions.

The historical village of Gurawara, is located about 50 kilometres from Gurgaon and 8 kilometres north east of Jhajjhar. A votive stone temple of Vishnu from Gurawara was built in 897 CE and images of Sheshashayi Vishnu (Vishnu lying on snake), Parvati, Ganesha, Mahisasurmardini and pillar fragments of 10th to 12th century CE speak of a temple lost in time.

From Jhajjar, at a short distance of about 45 kilometres, is the well-known town of Rohtak, or ancient Khokhrakot. The archaeological remains from Khokhrakot show a developed township from 1000 BCE to Gupta period. Coins of the Yaudheyas (a Republic that finds mention in Panini’s Ashtadhyayi of 6th /5th century BCE), moulds and evidences of mints were discovered at the site of Garhi Majra. Recovered during excavations were an image of Kubera and a terracotta female figurine of 2nd to 4th century CE. A ruined brick temple of 4th to 6th century CE was excavated and a votive red stone Hindu temple of the 11th century CE was reported.

Travelling ahead on Highway 9, the next site with clues to temples of an ancient past is Hansi. The inventory of sculptural remains from various locations firmly establish that Hansi did once have a temple. The earliest dated image is of Narasimha of the 7th century CE and two images of Mahishasurmardini (7th to 9th century CE). Other Hindu deities recovered and reported include Vishnu, Nar Varaha (Varaha in male form), six images of Surya and Ganesha (10th century CE). The Digambar Jain temple has two images of 10th /11th century and 12th /13th century CE. All this points to Hansi’s past as a religious establishment, covering a span of almost 400 years.

Further ahead at a distance of about 50 kilometres along the same Highway is the town of Agroha, steeped in historical significance. The archaeological site is situated about 1.5 kilometres away from the present town. According to tradition, Raja Agra, later named as Agrasen of Agrawal community, used to live here. The  remains of the Fort on the top of the mound are connected with his residence. The excavations revealed a settlement dating from circa 4th century BCE to 14th century CE, and more importantly, remains of a Buddhist stupa and a Hindu temples. The site had two temples which existed from the 4th century CE to the 11th century CE. Terracotta sealings (small clay seals) with Sri Narayana Deva inscribed (3rd /4th century CE) seem to suggest that the temples had a Vaishnavite affiliation. This is the only site with early evidence of musical notes - ni, dha, pa, ma, ga, re, sa- being inscribed on a terracotta clay tablet (9th century CE).

From Agroha, one continues on Highway 10 till Barwala, then taking Highway 52 to Badowala. From Badowala, Highway 152 leads to Kalayat. Upon reaching Kalayat, one is amazed at the beauty of the only surviving brick temple of the Gurajara Pratihara period, 8th /9th century CE.  Located on the banks of a sacred water tank, the temple and its environs transports one into the  realm of peace and calm.  The layout of the temples indicates a Panchayatana scheme, a central temple surrounded by four smaller shrines. Of these , only two have survived-- one in its original form, and the reconstructed.  The name Kalayat is believed to have its origin in the word “Kapilayatana”, or the home/ base of Kapila Muni.

Further ahead en route is the site of Pehowa, on the banks of mythical and revered Sarasvati River. Pehowa is of special interest as it is here that inscriptions speak of three temples dedicated to Vishnu and his Avataras. The inscription of the time of Mahendrapala, 895-905 CE, mentions a horse fair at Pehowa, visited by numerous horse dealers from various localities, and records the construction of a triple temple to Vishnu by three brothers. It further records the collection of a voluntary tax from each trader for the purpose of maintenance of these Vishnu temples. From a mound stone sculptures depicting scenes from the Ramayana and the Mahabharata and remains of  an ancient temple plinth were reported. The structural remnants of earlier temples, such as pillars, have been reused in the relatively modern temple structures of Garibnath Temple and Saraswati Temple at Pehowa.

The sacred site of Kurukshetra is just 25 kilometres from Pehowa, and remnants of its past have been recovered from the area of Thanesar located on the outskirts of Kurukshetra. The city was earlier known as Thaneshwar and at times Sthaneshwar. It is believed that at the Sthaneshwar Mahadev Temple, the Pandavas prayed to Lord Shiva  for victory in the battle of the Mahabharata. The ancient site of Thanesar has a long period of occupation covering almost 2000 years, beginning from the 1st century CE. Thanesar finds mention in Banabhatta’s Harshacarita (The Deeds of Harsha), a historical poetic work of the 7th century CE. The city was also visited by the Chinese traveller Xuanzang in 634 CE. The excavated mound of Harsh ka tila brought to light Hindu and Jaina sculptures, dating from the 6th to 12th century CE. An inscription from the South East Asian country of Laos (second half of the 5h century CE) establishes the fact that the fame of Kurukshetra had spread beyond India.  The inscription of Maharajadhiraja Sri Devanika, compares the king to Yudhishthira, Indra, Dhananjay and Indradyunna, it eulogizes the merits of Kurukshetra and records that the king planned to establish a new Kurukshetra in Laos.

Travelling northwards from Kurukshetra on NH 44 towards Kalka, the well-known Pinjore Garden is just 5 kilometres before Kalka. The 17th century Mughal style garden is located in the foothills of Himalayas and was built by Nawab Fidai Khan during the reign of Aurangzeb (1658-1707). The garden was renamed to ‘Yadavindra Garden’ in the memory of Maharaja Yadavindra Singh of the princely state of Patiala who restored it to its former glory. In the vicinity of Pinjore garden are the vestiges of a glorious temple. The Bhima Devi Temple Complex, also called the Khajuraho of North India, consisting of  the restored ruins of an ancient Hindu temple dated between 9th and 11th century CE. The inventory of Hindu sculptures includes those of Shiva, Shakti, Parvati, Chamunda, Uma Maheshvara, Nandi, Karttikeya, a fragmentary Varaha, colossal images of Ganesha, Vishnu (fragmentary), and Surya (fragmentary) and also 19 Jain images.

Another site that deserves mention is Kheri Gujjar , which is located south of Kurukshetra along Highway 44 heading towards Panipat and Delhi and 10 kilometres before Murthal. Excavations at an old archaeological mound at Kheri Gujjar brought to light numerous sculptures, including three stone panel sculptures depicting scenes from the Krishan Leela. The first image is believed to be of Lord Krishna in a standing posture, whereas the second is a representation of the episode of Kaliya Daman,  and the third shows Krishna as Murli Manohar. A Shiva linga from the site is of 5th century CE and the early medieval images include sculptures of Vishnu, Uma-Maheshwara, Karttikeya, Mahishasurmardini, Surya, Ganesh, Brahma, Ganga and Yamuna, Nandi and Karttikeya. The masterpiece is a buff sandstone image of Karttikeya with six faces of the 9th century CE. Pillars, architectural pieces and even sculptures of an earlier religious structure have been reused in comparatively new temples.

These sites are just a glimpse of the rich heritage of Haryana which includes numerous other locations with vestiges of Hindu sculptural remains from the past. The terracotta plaque from Sugh, located in the village of Amadalpur Dayalgarh, Yamunanagar district, speaks of Haryana’s rich artistic and literary heritage. The plaque of 2nd century BCE, now housed in the National Museum at New Delhi, depicts a child seated comfortably on the floor and holding a Takhti in his hands, attempting to write the alphabets in Brahmi script,  and on the tablet is visible what is colloquially known as the Barakhadi.

The writer is a research scholar, worked as Project Associate and recipient of  Devangana Desai Senior Fellowship CSMVS Mumbai. She  has also co-authored two book