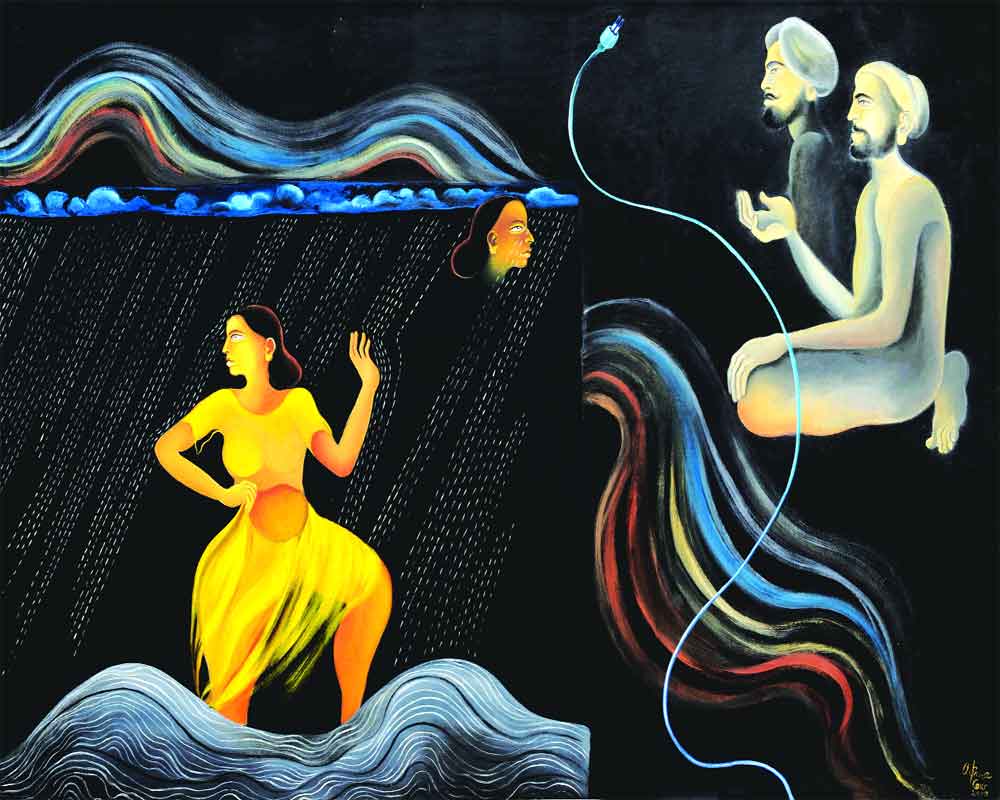 With the advent of the internet, many Indian artists have been able to reach the global audience while also sticking to their roots through art. SONALI CHAUDHARI delves deeper

The twentieth century has ushered in a lot of change, one of the most important being the internet or the world wide web and globalisation. It is also the century in which India finally got its freedom after centuries of British rule. As the name suggests, the world wide web connects people on every level, from every section of society. It gives everyone a bird’s eye view of the world through a screen in front of them. This has had a huge impact on every field including arts. Before the advent of the internet, only artists who were truly lucky, who had the means or had supportive patrons could make it beyond the borders of India. The treasure trove that is the Indian art fraternity was to some extent hidden from the world

India is a country whose strength lies in its diversity. I do not think there is any other country in this world with such diversity throughout its history. This has a huge impact on the artworks by Indian artists. Some are ultra modern like in the west, some merge tradition and modernism, some are purely traditional following old forms of Indian art, like the Bengal school or Tanjore paintings. This results in a truly exotic and eclectic mix for the mind and senses.

The impact of Indian art on the global art scenario is substantial. From auctions at renowned auction houses to exhibitions in the best galleries in the world, Indian artists are making their mark. The way world cricket can no longer be imagined without the Indian cricket team, the global art scenario can no longer be imagined without Indian artists. That is not to say that Indian artists have to emulate others. As mentioned earlier, India has its own rich culture and heritage, which is reflected in the work of Indian artists. That is our major strength I feel. No other nation in this world has the diversity that India has. It is an advantage and our strength as artists. The best example is the work of HS Raza, who incorporated the Bindu or circular dot into his work. It was a purely Indian concept remarkably translated upon the canvas. Of course, there are many well known western artists who have travelled to India and you can see it reflected in their artworks too.

The world wide web has played a huge role in giving Indian artists direct access to good galleries and auction houses abroad, which in turn opens up a world of opportunity. Good online art platforms also help. Indian artists are now exhibiting their works in every place imaginable, across the globe. Even before the advent of the internet, works of senior artists like the late MF Husain, unarguably one of India’s best known artists, commanded huge prices in the international market. However, as I stated earlier, the internet has truly opened up the world not just for artists but for buyers of art as well. One click on a good art website and voila, you have a masterpiece!

Indian art contains the same appeal that brought people from the west to India centuries ago. Where we come from is bound to be reflected on our canvas or whatever form we express ourselves in. Needless to say, this applies to all artists too, including the ones from India. I remember viewing the works of some renowned Indian artists recently; a deluge of colour reminiscent of a plate containing exotic spices and flowers found only in India. Regardless of whether a shape or form is depicted, it touches our innermost being, it touches our soul. It has the same impact on the world. One cannot imagine India without thinking about colour. It is almost synonymous with our country and as an artist, I am proud of it.

No matter where Indian artists go in this world, regardless of whether they live in India or abroad, as long as they stay connected to India through that invisible thread of the soul, India will continue to be reflected in their work. It is a boon not only for Indian artists but for the global art fraternity as well, in which India plays an important role. I look forward to Indian artists achieving even greater heights on a global scale in the years to come.

The writer is a visual artist