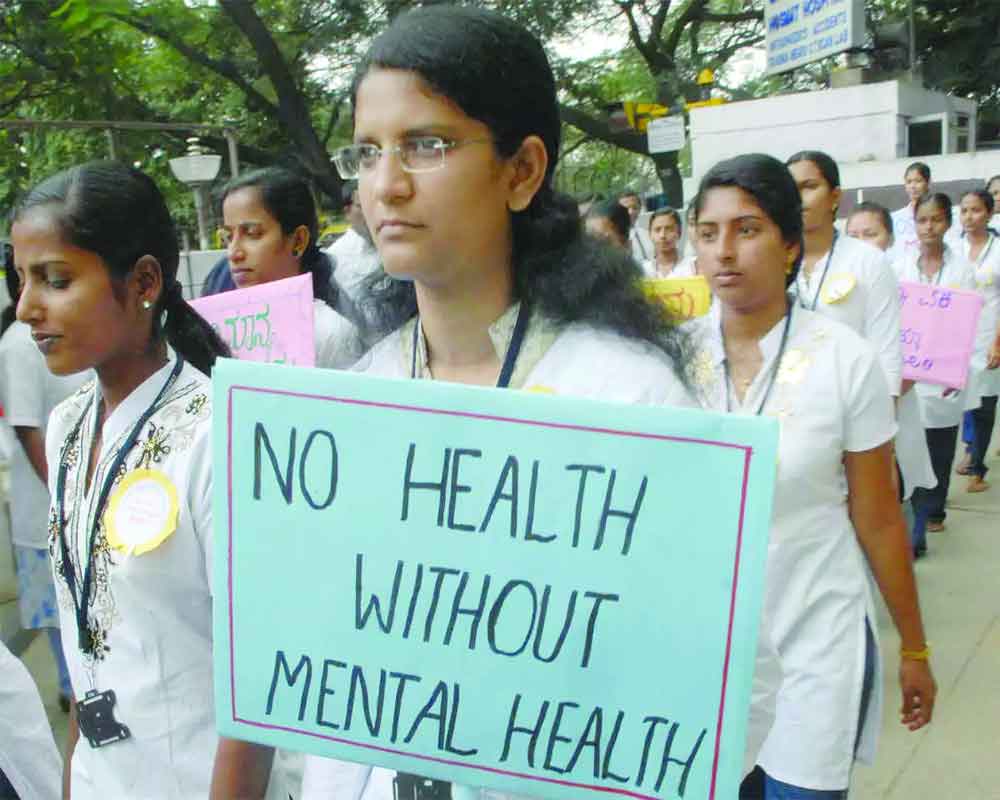 ‘You are not alone in the world.’

Mental health involves identification, prevention as well as assessment and treatment of persons suffering from various mental health disturbances. The best way to judge the normality of behaviour of an individual is not only whether such behaviour finds acceptance by society but also whether such behaviour fosters the well-being of the individual, thereby of the group. It must not interfere with optimal functioning and growth. Medical sciences put their faith in vaccines and antibiotics for restraining physical aberrations.

On the contrary, social sciences have been endeavouring hard to work out principles which prevent maladaptive behaviour and thus nurture a refined world. It must be remembered that causation of maladaptive behaviour has close implications for prevention and treatment. It is unfortunate that despite intense research work going into the relationship of both, we lack sufficient knowledge about the causes of functional psychoses like schizophrenia and bipolar disorders and a lot more. But the more fortunate thing is that with increasing scientific findings, our understanding of maladaptive behaviour has been getting enhanced and this in turn proves to be more capable of preventing unease and sadness. Mental health cases are, if I can use Allen Ginsberg lines from his famous poem KADDISH, “like a poem in the dark — escaped back to oblivion…”.  Incidentally KADDISH is a long poem Ginsberg wrote on the death of his mentally ill mother.

What are the implications of prevention? Healthy development of human beings and their ability to cope with incoming dooms on physical, psychological and sociocultural levels are important criteria. Principal emphasis in physical health measures is on family planning and postnatal care, including genetic counselling, to assess and indicate defective children. Research in the field of genetic code may make it possible for people to correct faulty genes. Next comes adequate nutrition for expectant mothers and postnatal care.

Problems arise when we enter the realm of psychological health measures. Psychiatrists, by and large, are one with others on one crucial element; need to learn needed competencies: physical, emotional, intellectual and social. These competencies, a well-evolved individual requires in order to effectively grapple with anxiety-arousing situations and handle emotions constructively. Yet another psychological health measure is one that necessitates obtaining a correct frame of reference in terms of realty, feasibility and value assumptions.

Let me devote some time to two very important areas of abnormal psychology. First, for example, taking much explored and researched area of father-son relationship (Oscar M and his troubled relationship with his father so graphically  depicted in Kafka’s Diaries), when a father’s assumptions about his young son are inaccurate, hypothetical and seem to be threatening to his son, that father’s behaviour will be rated as maladaptive and away from realty. Similarly, Sigmund Freud, in his case studies volume 9, described a young boy who approached him for his problems of “fears”, “compulsive impulses” and “prohibitions”. Freud asked him to state whatever occurred in his head even if these were “unpleasant, irrelevant or senseless”. Freud noticed, “From the precipitating cause of the patient’s illness in the adult years there was a thread leading back to his childhood.”

Most importantly, Freud detected that “The conflict at the root of his illness was in essence a struggle between the persisting influence of his father’s wishes and his own amatory predilections.” Freud continued, “There can be no question that there was something in the sphere of sexuality that stood between the father and son…”. Freud named it “The Father Complex”. In general, Freudian analysis laid faith in the fact that unconscious contents of the mind consisted in “the activity of …..desires or wishes which drive their energy directly from primary physical instincts.”

Second, there are many such explored relationships having relevance to human psychology: for instance, the relationship between man and woman as displayed in DH Lawrence’s poems and novels. Let us look at some nuances of Lawrence poem: To Women, As far As I’m Concerned -

“….abandon all ideas of feeling together,” is what Lawrence advocated. DH Lawrence, the novelist evinced keen interest in the abnormalities of human behaviour, including relationship between man and woman. His novel Sons and Lovers deals with the themes of the Freudian Oedipus complex. Lawrence found in the relationship between man and woman the most important problem of his age: sexual harmony as a great spiritual passion. We notice in his writings basic features of human behaviour, his religiosity and spirituality which reflect on working of mental activities. In Lawrence, sex is a source of conflict and passion; it is an emotional activity giving us a psychological insight into human nature and future of human beings.

Taking the first two above-mentioned instances, one comes across a father’s inability to find satisfying values that help in fostering a meaningful relationship with his son. The job of a father is to prepare his son for problems son is likely to encounter in future at various life stages. Father’s responsibility is all the more crucial if his son has suffered childhood traumas and has terrifying childhood memories. He must not compound his son’s grievances by imposing his own unfulfilled desires. Fraud quotes in the case studies Persian mystical poet Muhammad ibn Muhammad as saying, “For when the flames of love arise/Then self, the gloomy tyrant, dies.”

In families, equilibriums get disturbed many times due to untoward and untimely occurrences and at such times, parents have an important role to play in adjusting their behaviour in a manner son does not move into the world of alienation and disequilibrium. Relationships between man and woman have explanatory values with reference to human psychology. Lawrence’s poem is one such example. These and similar episodes from literature contribute to our understanding of abnormal behaviour.

Since sociocultural concerns reflect on pathological social conditions causing maladaptive behaviour, psychiatrists and psychologists pay increased attention to sociocultural factors in activating better development and functioning of all members. Measures like public education, social security, free shelter, medicines and food and social legislation to wipe out inequality in various spheres take into consideration future stress and psychopathological growth in adults and old people. Mental health of a person depends on how mature the society is.

However broad and laudable the objectives of mental health efforts both at government and non-government levels may be, resources place many limitations on such efforts. Though much headway has been made in the area of understanding, treating and preventing mental disorders, limitations continue to deter the professionals.

Personnel inadequacy is the first to catch our attention. It is well known that not only in India but also the world over, the number of psychiatrists available for treating patients is awfully low. There are shortages of personnel in other categories also like volunteers, psychiatric nursing, and other mental health fields. The second limitation is lack of facilities. Good and sophisticated buildings and other required infrastructure for servicing mentally ill persons who are admitted there are causes of concern. Non-existence of required facilities like mental health hospitals at local levels lead to behaviour disorders becoming more severe, harsh and more difficult to treat. Research is the third area of concern. Financing of mental health projects in view of the magnitude and social importance of mental disorders is inadequate. A study conducted long back suggested expenditure on alcohol is roughly 150 times more than expenditure on research on mental health. Research is mandatory for better concepts and procedures that help in better understanding of mental disorders.

There has been criticism that mental health programmes are victims of duplications and yawning gaps. These seem to be collections of bits and pieces rather than an integrated whole. It ought to be remembered that persons suffering from mental health problems in their day-to-day life come across all sorts of handicaps: educational, financial, legal and occupational. Psychiatrists believe that there should be a combined in-house approach to address all such problems under one roof to help patients cope with all such issues. Severe shortage of data is frustrating.

One needs to turn one’s attention to the services one can render towards mental health problems. A citizen can be helpful in more than one way. Be s/he a student, a lawyer, a businessperson, a politician, a film actor, s/he has her/his interests at stake, directly or indirectly. Though the mental health of a nation gets manifested in various ways like quality of leadership, moral responsibility, courage, self-reliance, scientific and cultural achievements, etc, in a democracy it is the people who plan and implement the goals. There are different ways an individual can assign to himself a role in the area of mental health. Psychologists suggest a number of such ways. First, he can volunteer to work in a mental hospital or primary health centre or NGOs etc.  Second, he can join other members and act in a group and contribute to enlightened public education. Third, he can help and support others to understand the need for expanded mental health facilities for all age groups. Fourth, he can use science to create conditions that are conducive to solving problems of mental health.

To conclude, pragmatic wisdom dictates us the following:

First, we are living in times when every one of us is fronted with difficulties that are difficult to cope with;

Second, these are the testing times when the individual in question will require psychological and behavioural assistance;

Third, such difficulties are common, not rare, that visit upon people from all sorts of life, from the poorest to the most affluent.

Fourth, primary forms of maladaptive behaviour, if unattended and untreated, may grow into severe forms of mental illness, including psychosis, as suggested by some psychiatrists.  In order to prevent these, it is essential to have early detection and course correction.

Fifth, all types of measures — primary, secondary and tertiary — are very effective in the long-range management of mental health of both individuals and society. We cannot afford to ignore any.

Management of mental health requires a holistic approach because a majority of us face, at some point of time in life, one or other form of maladaptive behaviour: mild or serious. That is the reason Russian psychiatrist Ziferstein said, ‘You are not alone in the world.’ How tragic but really so true!

(The writer is a former Additional Deputy CAG, a poet, writer and columnist/reviewer for the newspapers The Pioneer, The Daily Star and Brazilian magazine SIBILA. His fifth book: The Descent: Essays and Critiques was released in January 2022. He is a nominated member from the category of ‘Literate person from the public and community’ of Ethics Committee on Research of mental health establishment- IHBAS (Institute of Human Behaviour and Allied Sciences), of the Government of NCT of Delhi. Views expressed are personal)