Nepal infant gets rid of liver tumour in three months

Nepal infant gets rid of liver tumour in three months 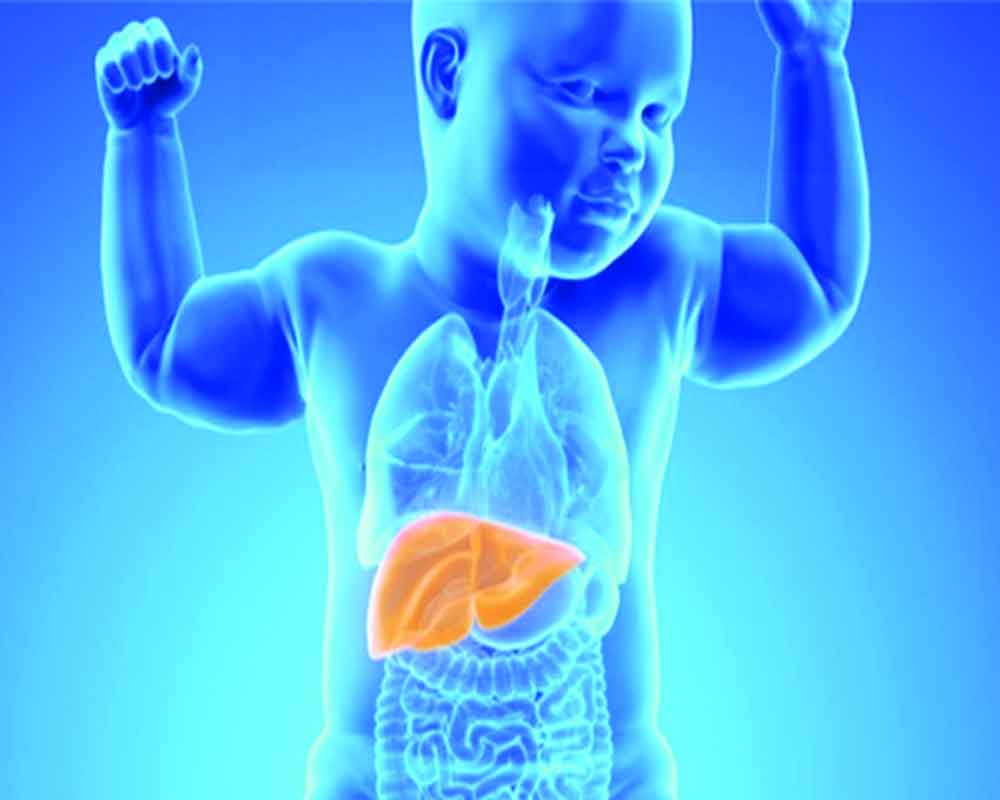 An infant from Nepal who was only eight days old when she came here with a rare form of malignant liver tumour is cancer free now after undergoing six cycles of chemotherapy and a surgical resection.

The baby, now three months, was suffering from hepatoblastoma, a rare tumour that originates in cells of the liver, and had been admitted to the Fortis Memorial Research Institute in Gurugram, Haryana.

Cancerous liver tumour in early childhood has an approximate incidence of 1.2 per million, while congenital hepatoblastoma is even rarer, said Dr Vikas Dua, Principal Director, paediatric hematology, oncology and BMT, who led the team in treating the girl child.

The doctors managed the case through six cycles of chemotherapy and a surgical resection.

“The baby presented to us on day eight of life with a solid mass in the liver which was picked up incidentally on an antenatal scan. It was a very challenging case considering the baby was a newborn. However, she tolerated chemotherapy well and did not experience any major side effects," Dr Dua said.

An ultrasonography of the abdomen revealed that two segments of her liver had a tumour (3.7x2.4x3.8 cm). Chemotherapy was immediately started, followed by surgery and again some more cycles of chemotherapy were given.

According to Dr Dua, the prognosis is excellent for children with standard risk who have a good response to chemotherapy and good resection. "The dose of chemotherapy was quite small so we had to be careful.

“As it was a malignant tumour, it could result in liver failure which could have been life-threatening. Currently, the patient is three months old and under continuous follow-up of paediatric oncology service."

He said that these cancers are rare but highly curable provided they are detected early and treated by a correct team of  pediatrics and cancer experts.

ALL ABOUT LIVER TUMOUR (HEPATOBLASTOMA)

It is a very rare liver cancer that typically affects kids aged 1 to 3. Healthcare providers treat hepatoblastoma with chemotherapy and surgery, including liver transplantation. Approximately 75% to 80% of children with hepatoblastoma are alive five years after diagnosis. That survival rate increases to 90% for children whose tumors were diagnosed and treated early on, usually with a combination of surgery and other therapies. Healthcare providers are developing new surgical techniques to help children who have more advanced forms of hepatoblastoma.

*How common is hepatoblastoma?

Hepatoblastoma affects about 1 in 1 million young children living in developed countries. The number of cases has increased over the past few years, as more children who are born prematurely or with very low birth weights survive their challenging start in life.

*How does hepatoblastoma affect my child’s body?

Hepatoblastoma damages your child’s liver, one of the more important organs in our bodies. We rely on our livers to break down, store and absorb nutrients. Our livers also eliminate toxins and keep us from bleeding too much when we’re cut or injured.

*What are hepatoblastoma symptoms?

*Hepatoblastomas develop over time. You may not notice any changes in your child’s body until the tumor in their liver has grown large enough to affect their overall health or behavior. Here are some signs your child may have hepatoblastoma:

They may have a painful lump in the upper right side or the middle of their abdomen.

They may have persistent nausea and diarrhea.

Researchers haven’t identified hepatoblastoma’s exact cause, but they have identified a few risk factors, including hereditary conditions. Here are some conditions that might increase your child’s risk of developing hepatoblastoma:

Premature birth. Most babies are born 37 weeks after their mothers become pregnant. A baby born before 37 weeks is considered premature.

Early exposure to Hepatitis B. This is a virus that attacks your child’s liver.