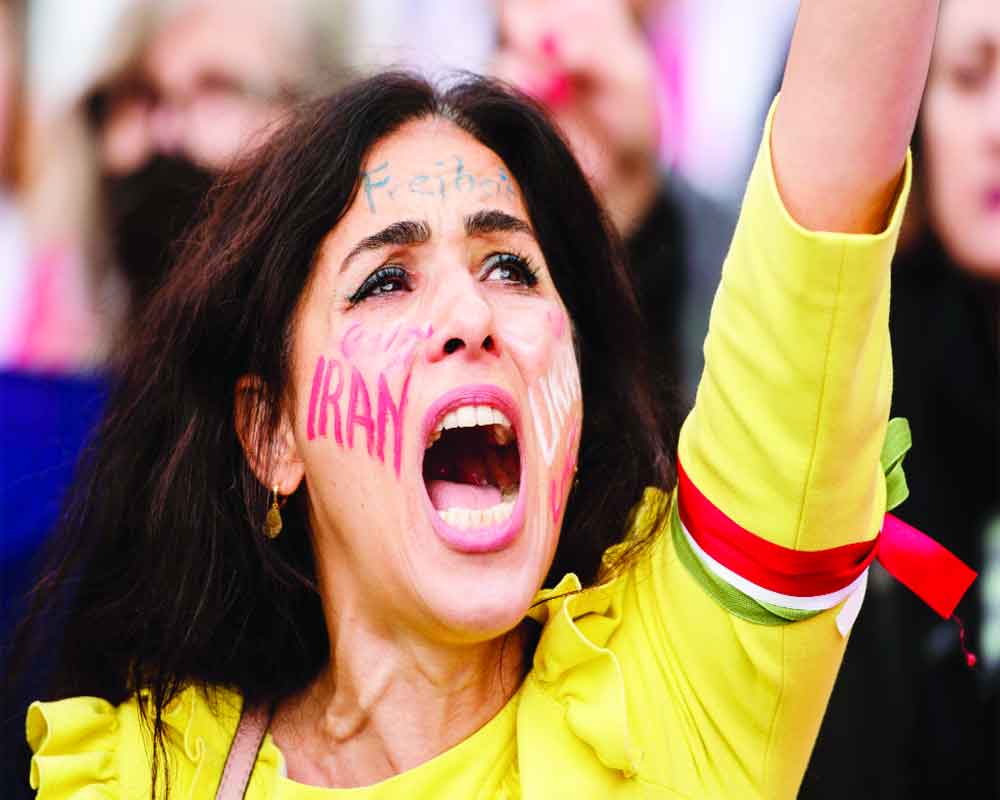 Accept you (ladies) as leaders. Ladies are the leaders of our revolution; we are their continuation. True men and women originate from a woman’s lap.”

“If you, the women, are good, both men and children would be good as well.”

The tragic death of Mahsa Amini was bitter and unhappy for the nation and the Government of the Islamic Republic of Iran, and from the very outbreak of the news, the country’s authorities, especially the President, in addition to contacting her family, issued an order for the immediate investigation of the case. The disciplinary force and forensics presented their findings to the media. According to the evidence, the disciplinary force transferred Amini to the briefing centres for familiarisation with the law of Islamic dress code for not observing the proper hijab.

However, in the briefing session, in which 20 others were present, she had a stroke and passed away despite being rushed to hospital. After the autopsy, the medical examiner announced that there was no sign of torture on her body. In addition, it was specified that she had undergone brain surgery as a child, and the medical documents were presented to the media.

Despite the careful handling of the case, the vested interests tried their best from the very beginning to distort and make an instrumental use of Amini’s death. They pursued several goals by their false information, which was carried out under the guidance of the Western media imperialism.

First, they tried to introduce hijab as a cause of women’s backwardness and restriction, and consequently, introduce Islam as an anti-feminist religion.

Second, they accused the Islamic Republic of Iran of violating women’s rights, and induced the false impression that the hijab law in Iran has caused backwardness and severe restrictions for women, and sometimes they compared the situation of women in Iran with the situation of the women in the Salafi version of Islam.

Third, they publicised that Iran, in response to the people’s protests, has severely suppressed them.

Of course, such widespread media propaganda against Iran is not unprecedented. It only suffices to take a look at the numerous news and analyses that have been provided against Iran in this limited period, so that the intensity of the enemy’s animosity and plotting in this field can be fully clarified.

Enemies of Iran, who have been abortively exerting pressure on the nation, have now taken resort in media and cognitive war.

The Ministry of Information of Iran published the causes of the recent unrest and behind-the-scenes plots of the media war that clearly showed that how the US, the UK, the Zionist regime, Saudi Arabia and the terrorist outfit Mujahideen-e Khalq (MKO) have united and played a role in this incident in the two areas of Media Soft War and Media Hard War by provoking and equipping the local enemies of Iran.

This is part of the project to inflict injury to the cultural values of the East by the Western media.

Tragically, sometimes the media houses of the friendly countries, unwittingly take the torrents of fake news and improper analyses as truth and present the same for their domestic consumption.

This incident and the inappropriate function of some media require the examination of the status and dignity of women in Islam, particularly in the Islamic Republic of Iran.

Status of women in Iran

In this media trial, the Islamic society of Iran has been projected as a misogynist society. They insinuate that hijab restricts women’s freedom and stems her growth. However the concept of women’s growth and excellence as seen in the West is biased. Is presenting sexual features and occupying the minds of the youth of society criteria for women’s growth and accomplishments?

The status of women in the Islamic Republic of Iran should be studied and examined from two perspectives; first, what is the concept of women in Iran and what position has it drawn for them in its laws; and second, what are the realities of women’s lives in Iran?

Upholding women’s rights in creating Islamic social foundations, due to the oppression they suffered in the previous regime;

Providing the means to achieve the formation of a family that is the main basis for the evolutionary and growing human movement;

Restoring the important and noble task of motherhood in raising doctrinal human beings in the active fields of life.

In addition to the introduction, women’s problems are directly touched upon in the main body of the Constitution:

Clause 14 of Article 3: Ensuring the comprehensive rights of people, both women and men;

Article 20: Both men and women are equal

Article 21: The government is obliged to guarantee women’s rights in all respects in accordance with Islamic standards

Article 62: Both men and women enjoy all human, political, economic and cultural rights, provided that they comply with the standards of Islam.

Since the beginning of the Islamic revolution, Iran has specifically emphasised the need for the growth and promotion of women’s status.

Greater participation of women in social, cultural, educational, economic affairs, by maintaining family codes of conducts and the sublime values of the Islamic personality of women.

In the second development plan (1999-1995), the “Office of Women’s Affairs” was specially established in the presidential institution.

In the fourth development plan (2005-2009), the government is obliged to pay housing-loan interest subsidy to house builders who build houses for women without guardian; and it emphasises the empowerment of women to establish social interaction necessary for the formation of women’s cooperative units.

In the fifth development plan (2011-2015), the word “woman” is mentioned 21 times in different articles; issues such as “self-confidence”, “strengthening the institution of the family” and “empowering the needy disabled and female heads of the household”.

In addition to the above, special laws are also devised for the working status of women in the labour law. No woman is employed as a construction worker or street sweeper in cities. They are prohibited to work at night.

The 20-year vision statement (2005-2025) or “Horizon of Iran in the year 2025” is implemented in the form of four development plans in five-year periods. Statement 2025 includes all members of the society, both men and women, and along with men, women should also strive to reach the vision horizon of Statement 2025. In this regard, a national conference titled “The Place of Women in Iran’s 20-Year Vision Statement 2025” was held.

The Charter of Women’s Rights has 148 Articles, several sections and chapters, and deals with all aspects of women’s lives in the personal, social, cultural, political, economic, legal, and other fields.

(The writer is Cultural Adviser to the Ambassador of Islamic Republic of Iran in New Delhi. Views are personal)