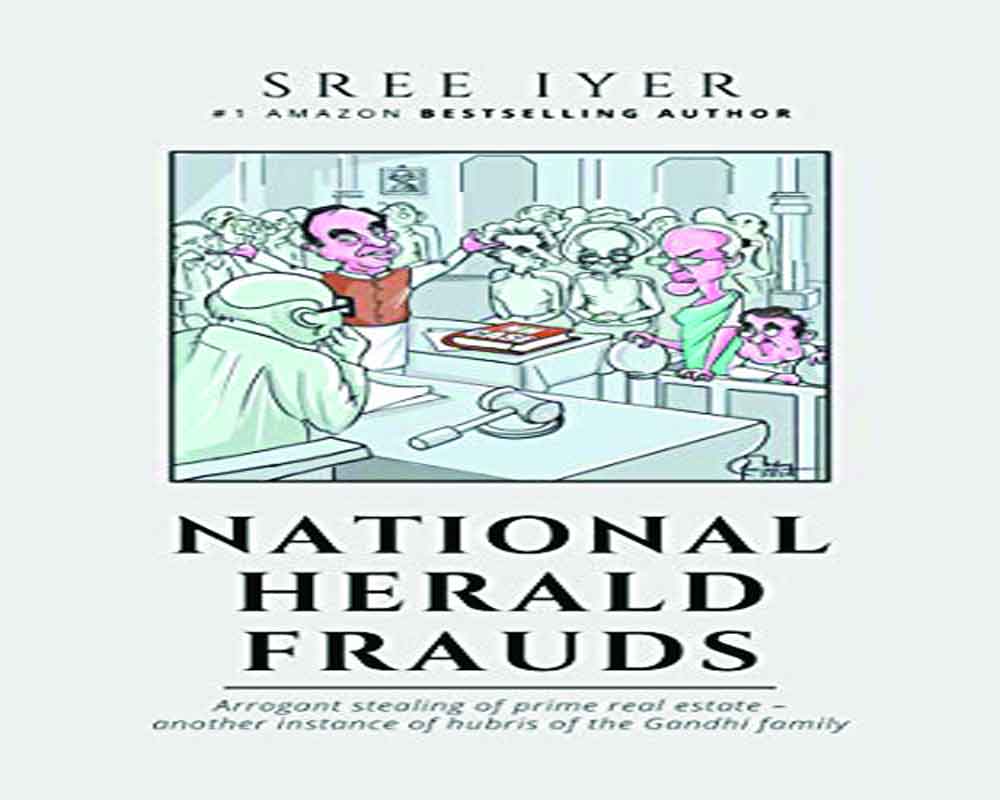 Sree Iyer’s National Herald Frauds is a unique work as he takes the reader through myriad corruption charges, scams and illegalities that are inter mingled with one another, writes Kumar Chellappan

The period 2004 to 2014 could be easily rated as India’s season of scams and frauds. The 2G Spectrum that saw the incarceration of a princess from the ruling clan of Tamil Nadu, the Commonwealth Game scam which tarnished the image of India across the globe, the Augusta Westland chopper deal, Coal Gate, the disclosure by an upright chief of army staff that middlemen had the audacity to offer him crores as bribe in return for approval for purchasing a particular brand of armored vehicle for the Indian Army, the list goes on. Scams, corruption in high places, commission and kickbacks, violation of foreign exchange rules, mysterious accidental deaths of key witnesses and officials probing crimes are inherent in the post-independent history of the country. One has lost count of the controversies and scams that have rocked the country.

A senior investigating journalist has brought out the plot of Chidambara Rahasya (the mystery behind the presiding deity at Chidambaram, a coastal pilgrim centre in Tamil Nadu) highlighting how a politician built up a financial empire stretching across the five continents. The details are endless. What is unique about these scams is that we just read these reports for days altogether and relegate the same to the back of our minds only to forget them as new and spicy scam stories emerge periodically. How many among us remember the Bofors gun kickbacks and the HDW submarine deal? Even the Rafale fighter aircraft scam which was an issue of the 2019 Lok Sabha election has been forgotten though a Chennai based national newspaper makes occasional hue and cry. Corruption has become a way of life for us which made a former Prime Minister declaring to the nation that it was a global phenomenon and there was nothing surprising in it!

One of the scams/frauds which refuse to move out of public memory is the massive corruption associated with Associated Journals Ltd (AJL), the publishers of National Herald, an English daily once rated as the voice of India. The paper was launched by Jawaharlal Nehru, the architect of modern India who was also the first Prime Minister of the country. The paper was a failure though it boasted some of the best names in journalism those days. Nehru himself used to write the op-ed of the paper. But the truth is that National Herald is an illegitimate progeny born out by consuming the forbidden apple!

The latest saga of National Herald hogged the limelight in October 2012 when J Gopikrishnan, the star reporter of The Pioneer flashed a news about the Gandhis’ (Sonia and Rahul) plans to revive the daily. The Ma-Beta team launched a company by name Young Indian which acquired the liability of Associated Journals Limited, the enterprises that owned National Herald.

The AJL had availed Rs 90 crore from Indian National Congress and this liability wad bought over by Young Indian at a value of Rs 50 lakh. Why should Young Indian buy out the Rs 90 crore liability of AJL from the INC by paying Rs 50 lakh is the unanswered question. The National Herald was forced to wound up its operations for want of readers. Even Congressmen refused to read the iconic paper launched by the cult figure Jawaharlal Nehru. Though Indira Gandhi, Rajiv Gandhi and Manmohan Singh had tried in vain to squeeze the newspaper industry in the country by hiking import duty on newsprint and other paraphernalia, newspapers managed to survive because the tenure of their governments were marked by mega scams and super mega scams. (During 2009 to 2014, there was a scam per day on an average!). Since the entire opposition line up is busy scheming means to dethrone the Modi government, they do not discuss these scams nowadays. The deeds/misdeeds of P Chidambaram, Karti Chidambaram, Maran brothers, poetess Kanimozhi, media barons Peter Mukherjee and Indrani are all forgotten.

The day after The Pioneer reported that the ma-beta duo would relaunch National Herald, Rahul Gandhi issued a release stating that the news was not correct. But he did not deny the disclosure that Young Indian had bought over the Rs90 crore liability AJL owed to the Congress party. What was the reason behind the formation of Young Indian and why did it buy the AJL’s liability remained a mystery as “Omerta” (Italian for Silence) is the rule of the game involving the Nehru-Gandhi clan. Subramanian Swamy MP, the whistle blower, took it up and filed a case in a New Delhi court.

Instead of taking Dr Swamy head on, Sonia and Rahul Gandhi tried in vain to derail the case by citing procedural issues. This was a proof that something was rotten in Herald House, which was built by AJL in plot of land the company got for a song. It was disclosed that AJL owns prime real estate in the major cities that was offered on a platter to the company to launch the editions of NH. Last heard, the case is progressing at a snail’s pace in one of the Delhi courts. Though the duo claim that they do not have anything to hide, they are working round-the-clock to hush up the case.

It is with this background that US based entrepreneur Sree Iyer wrote National Herald Frauds, a work of different genre that could serve the layman as a ready reckoner. Starting from the scoop made by Gopikrishnan in October 2012, Iyer takes the reader through the history of National Herald and the Nehru-Gandhi clan’s hidden interest in the company. Though Rahul Gandhi denied that Young Indian would revive the now defunct National Herald, the company relaunched the web edition of the daily. Iyer has recounted the entire saga of National Herald from the day it was launched in 1938 and he has made some startling disclosures. Sardar Vallabhbhai Patel, independent India’s first deputy Prime Minister and Home Minister had warmed Nehru many times when the latter tried to tap certain forces to mobilise funds for the daily. Nehru had dealings with certain undesirable elements from whom he collected funds meant for Herald. Sardar Patel had warned Nehru about the entrapment that lie ahead. But his plea fell on Nehru’s deaf ears. The Sardar had warned Nehru of certain people with dubious track records donating money for sustaining the family newspaper but the forer’s words did not make any impact on the then Prime Minister, The newspaper stands out because of the chromosomes of sins that gave it the shape.

V Shankar, a former ICS officer, who had worked as Sardar’s private secretary had in his memoirs My Reminiscences of Sardar (two volumes) vividly describe the modus operandi employed by Nehru to mobilise funds for the newspaper and has reproduced the communication between the two over the issue. Of late SN Aggarwal, a former judge of the Punjab and Haryana High Court in his book Had Sardar been India’s First PM has ruled that National Herald is enmeshed in corruption and it would be difficult for Sonia and Rahul to come out clean from this 85 year long scam. Remember, it is a judge who has said this. The only option mother and son have is to take on Dr Swamy by the horns and fight it out in the courts and come clean. The delay tactics and attempts to derail the court proceedings are signs that they do have something to hide from the public. If Sonia and Rahul come out of the case with flying colours, well, that would be the end of whatever dissidence they face now.

Iyer’s National Herald Frauds is a unique work as he takes the reader through myriad corruption charges, scams and illegalities that are inter mingled with one another. The work is a ready reckoner and must read for those who want to know the kind of politicians we are blessed with. Why certain officials and politicians are kept out from the corridors of power despite the highest judiciary in the country taking the government for task for its indifference and apathy. Rajeshwar Singh, ace investigator of Enforcement Directorate is a living martyr of the “you scratch my back, I’ll scratch yours” approach of the people who matter in India.

Having read the earlier books authored by Iyer, one can trust the data he has furnished. All official information he has collected and collated through RTI Act. Thank you, Iyer. Waiting for your next revelation.