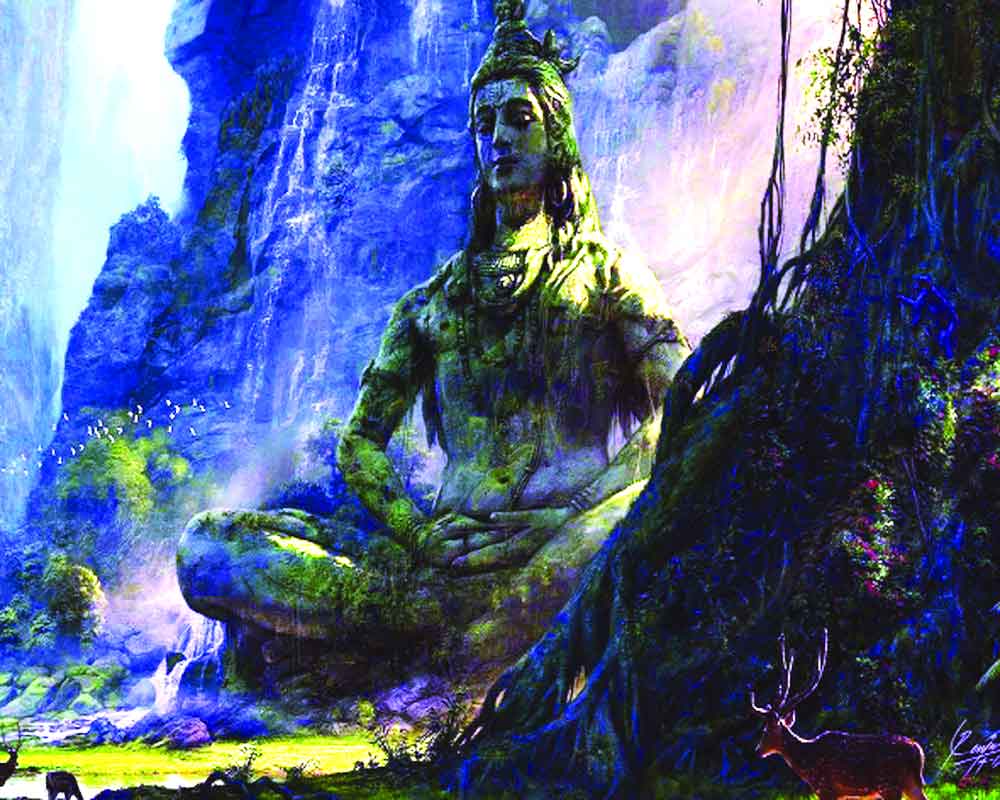 Picking up threads from the previous issue, coming down to the second imagery, Lord Shiva is visualised mounted on a bull, having in His entourage assortment of multitude forms of existences, some of them weird and even invisible. To name a few - divine beings; human beings; devilish existences; animals; birds; goblins, and even invisible existences such as ghost etc.  Symbolically, His entourage is indicative of the multipolar manifest world with all its enormity and diversity.  This symbol stands for the dynamic world ever on the move at its own pace, as would a bull moving at a constant pace mean.  While pulling a bullock-cart, the bull moves unprovoked at a constant pace and would not stop in the way till it reaches a place designated for being fed and taking rest.  After a while, the bull again takes the journey forward, and then finally reverts back to its normal place of abode after completing the voyage.   The manifest world too, after being on the run for a specified time, reverts back to the primal source to acquire a restful state, so as to get recharged once again.  Following which, out of the seeds of life withdrawn into primal-source, fresh creation cycle takes off.

Mount Kailasha, said to be the place of abode of Lord Siva, is one of the high peaks in the Himalayan range to which lot of perennial rivers are sourced.  Contextually, however, only the river Ganges has been named for the sake of understanding.  Being a high peak, it is closest to the cosmic world, simultaneously having all round view of life down below.  Lord Shiva, with lunar crescent over the head, read together with his place of abode, the Himalayan range having in store perennial rivers, is symbolic of eternity, infinity.

The presence of lunar crescent symbolizes the convergence of all nature driven forces.  For, Moon’s luminosity is drawn out of the light extended by the Sun, as well as all the planets and stars up above in the cosmos.  But before all light drawn thus, flows down the line, Moon does its own stamping by turning them into an amiable form.

With the play of Damru, the equilibrated state of the primal source gets shaken, when the primal sound note O? comes into play.  Now going by the scientific perception, once there is entropy (disorder), it multiplies in geometric progression.  So, it happened following excitation of O? sound.  Out of that singularity (Om) arose Energy- trinity - Sata, Rajasa, and Tamasa. It is symbolised by a Trident - the three phalanges of the trident branching out of the base rod imply three dimensions of energies emanating from a singularity.    The random mutation of the three that followed, led to multitude of differentiated energy streams.  The harmony and symphony of these differentiated energy streams that followed, led to all creations, first up above in the cosmos.

The ground thus got laid down for carrying forward the creation chain to the earth plane, in which Moon playing from the front serves as the carrier of cosmic energies.    Moon, thus, serves as the interface between the cosmic world above and life mechanism on earth plane. Thus, comes into being a life cycle, which runs in succession, as would the run of river Ganges originating from Lord Siva’s hair locks imply.  Water travels from its source to the sea, extending life all through its run.  We are all aware that but for water there would be no live form-existence.  Water running down the river stream as also in the sea evaporates, leaving behind all impurities, takes the form of cloud, and again rains back to recharge the water bodies on earth on a regular basis.  All forms of life follow a similar cycle.  We are born and then after pursuing one’s journey here in this world for a while, we meet the end of our form-existence.  Life’s journey however does not end in finality with death.  It rather gets recycled with a new rejuvenated body-encasement, charged with fresh vigour and strength, as the water resources get recycled.  Life’s journey thus continues changing its garb again and again, the way water changes its form when it evaporates, cloud formation, when it rains, or turns into snow.  But in all its stages, it primarily remains water only.

Now coming back to Lord Siva’s entourage, it exemplifies multitude of existences forming this world.  It is pertinent to note that as per Indian perception approximately 8.4 million species are there in existence, which this imagery signifies.