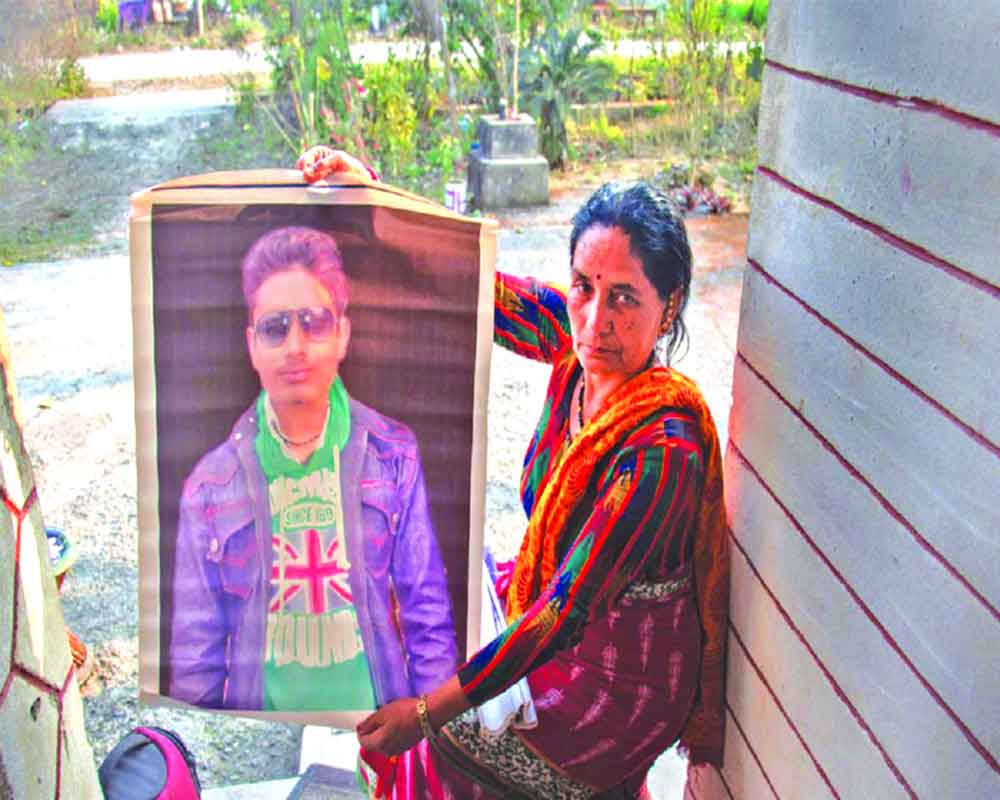 Youths from Nepal, who are  looking for greener pastures abroad,  are being trafficked on a regular basis. They are taking the death route to Europe to save themselves from poverty and the drudgery of daily life. The girls travel to India and end up mostly in brothels in Mumbai, Kolkata, and Delhi, writes Biswajeet Banerjee after a recent visit to  Kathmandu.

Yamkala Tiwari’s  younger son Navin has been missing since December 2017 when he left Nepal in search of greener pastures in Europe via Turkey.  The friends with whom Navin escaped from Nepal  have also lost track of him. Some of them have reached Turkey, others  Greece, but there is no trace of Navin.

This is not a solitary incident. Youths from Nepal, who are  looking for greener pastures abroad,  are being trafficked on a regular basis. They are taking the death route to Europe to save themselves from poverty and the drudgery of daily life. There is a set route chalked out by the agents who claim to be experts in human trafficking. There are two routes to reach Greece via Turkey. First, crossing the river Evros and the Mediterranean Sea in overcrowded boats.  The second,  trudging a 203-km-long route through the hostile jungle.

Yamkala Tiwari believes that her son probably took the second route. Navin’s friend Moti Gurung told her that her son  had fallen sick en route to Greece while trudging through a forest area for seven days. Moti said in a Facebook conversation that he had left for Greece from Istanbul at midnight with four Nepalis, three Pakistanis, an agent, and a guide who showed the way through the jungle. The agent had left Navin with an unknown person, who probably got him admitted to a hospital after he developed a fever and had a swollen leg.

Janakraj Sapkota, a local journalist says that the family has not heard about Navin since then. Moti had reached Greece in July 2018, almost seven months after his odyssey began with Navin. Moti was arrested in Greece and spent 25 days in jail for illegally entering the country. But after that, there has been no communication with Moti as he has deactivated his Facebook account.

UN Traffic and Persons Protocol says human trafficking is a global crime that trades in people and exploits them for profit. People of all genders, ages, and backgrounds can become victims of this crime, which occurs in every region of the world. Traffickers use violence, fraudulent employment agencies, and fake promises of education and job opportunities to trick, coerce and deceive their victims. The organised networks of human traffickers or individuals behind this lucrative crime target people who are vulnerable, desperate or simply seeking a better life.

Article 9, paragraph 4 of the United Nations Trafficking in Persons Protocol asserts “States Parties shall take or strengthen measures, including through bilateral or multilateral cooperation, to alleviate the factors that make persons, especially women and children, vulnerable to traffickings, such as poverty, underdevelopment and lack of equal opportunity.”

In 2020, the COVID-19 pandemic led to a significant global economic downturn. Current projections indicate that the COVID-19 Pandemic Recession (hereinafter “Pandemic Recession”) will involve a 6.2 percent decline in global per capita Gross Domestic Product (GDP per capita), making it the most severe recession since the end of World War II.102 While both advanced economies and developing countries are experiencing a recession, experts warn that there is a risk that the Pandemic Recession may increase inequality both at global levels and within countries.103

Sapkota has a list of Nepalese youth who have gone missing or whose family has lost touch with them. He says every death at the Turkey-Greece border sends shivers down the spine of parents in Nepal.

Anshumali, an activist who works against human trafficking at the Indo-Nepal border, said the human traffickers target people who are marginalised or in difficult circumstances. Undocumented migrants and people who are in desperate need of employment are vulnerable, particularly to trafficking for forced labour. Victims may be forced or tricked into an exploitative situation which constitutes trafficking after the traffickers use violence, deception or blackmail. Criminals trafficking children target victims from extremely poor households, dysfunctional families or those who are abandoned and have no parental care.

The agents are the key to this human trafficking racket. They lure youth with the promise of a greener pasture in Europe. They charge a fee and assure a safe passage through forests. These agents do not allow illegal migrants to keep any identification document or cell phone with them. This is why the authorities are unable to ascertain the nationality of those found dead or deranged migrants.

With an average of 1,500 Nepalese migrant workers leaving Nepal every day for foreign countries, international labour migration forms an important part of the lives of Nepalese citizens. Estimates, however, suggest that approximately 3.2 million migrants from Nepal are working with irregular status in countries other than India. It thus helps to surmise that the number of Nepalese migrants in foreign countries, who may have taken the irregular channels, is more than the official data made available by the Government of Nepal.

“While most migration from Nepal occurs legally, some of the greatest insecurities for migrants, and public concern about migration, are associated with irregular migration or smuggling of migrants,” says Tek Prasad Rai, a senior police official who once headed the Nepal Police’s Anti-Human Trafficking Bureau.

Nepal’s government and other agencies do not have the exact number of Nepalis who reach Turkey on  work visas and then illegally head for Greece by paying hefty sums to organised traffickers. Officials vouch that for the majority of the Nepalese youth traveling to Greece is not the culmination of their journey. They illegally enter Germany, Spain, Italy and Portugal. They work in hotels and earn anything between US $ 10-12 per day, which they claim is not enough.

Rai, the police officer,  points out that stories about youth – male and female – being trafficked to other countries can be heard in  almost all the villages across Nepal. Many of these people, particularly young girls, are trafficked to  India where the girls end up in brothels of Mumbai, Kolkata, and Delhi.

As India and Nepal share a porous border, the young boys go to India to work as Gurkha (guards) or work in roadside eateries selling momos and Chinese food. These young boys remain in touch with their parents and sometimes send money to their families, but the new trend of youths illegally going to Europe is dangerous.

According to the Missing Migrants Project of the International Organisation for Migration, within the first five months of 2022, as many as 21 migrants have died in the Turkey-Greece border area. In January and February of 2021, 10 migrants were found dead in the same area.

Ujjwal Kumar Ghising, the chairperson of the Immigrant Nepalis Association in Turkey, said that on February 3, officials nabbed 50 migrants from Nepal, Pakistan, and some other African countries at the Greece-Turkey border while trying to cross to the other side. They were arrested and later asked to undress and were then ordered to return to the Turkish territory on foot. Nineteen of these people, including some Nepalese succumbed to the freezing cold.

Officials say it is difficult to track the youth travelling to Europe illegally as family members rarely file complaints about their missing relatives because their own family members are involved in the illegal trafficking racket. In the case of Navin, his brother-in-law Tulsi Prasad Neupane was instrumental in sending him to Turkey and from there to Greece. Since Neupane had worked in Saudi Arabia, Navin’s family members were confident that the route he suggested was safe. The family had even paid 15 lakh Nepalese rupees as fees to the agent. This was done with the hope that once Navin landed in Greece, he would get a good job and repay the money they were spending on his migration.

“I never knew that travel is so fraught with danger. I was given the impression that it is an easy journey and the agent will ensure the entry of Navin in Greece and by early 2018 he will start sending money to us,” said Yamkala Tiwari.

As a mother, she had consulted a local priest before Navin took up the journey. The priest suggested a date after consulting the astronomical calendar, saying it was the most auspicious time for the journey.

“I never knew that it would be the journey to death,” Yamkala said, sobbing.

(The writer is Political Editor, The Pioneer, Lucknow)