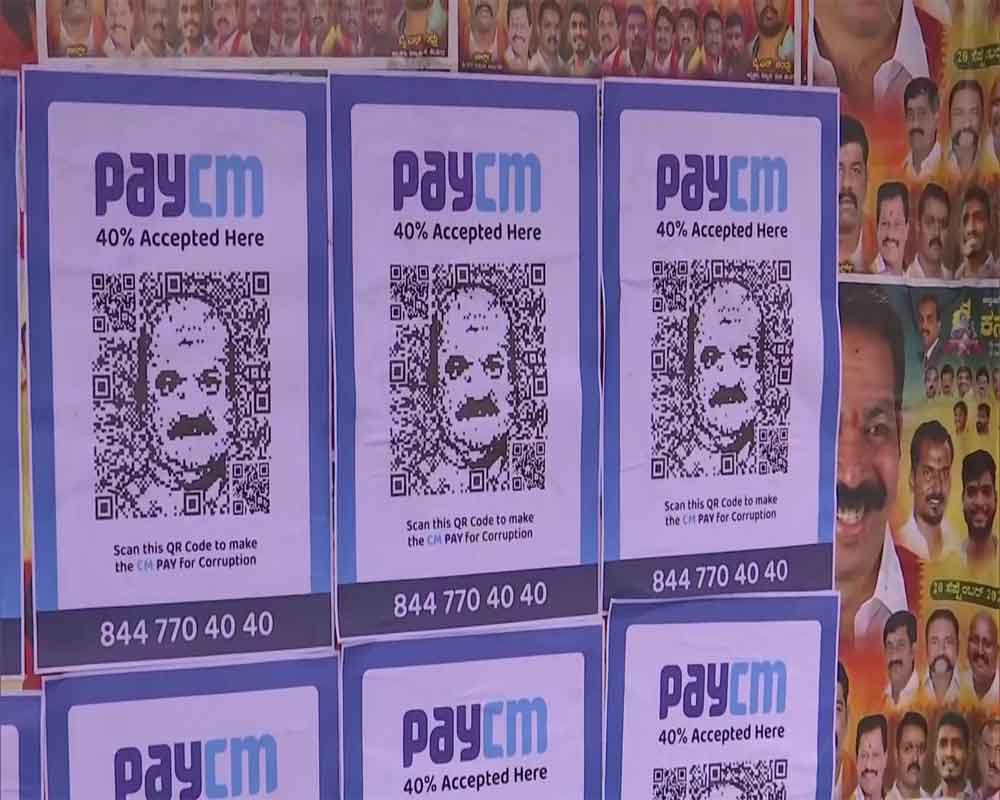 The "PayCM" issue made noise in the Karnataka Legislative Assembly on Thursday, as BJP accused the Congress of deliberately and unnecessarily using the Chief Minister for their false campaign to reap political gains.

The Congress, in its defence, asked the government to take action if there is anything illegal in it.

Law and Parliamentary Affairs Minister J C Madhuswamy said investigation is on and police are taking action in connection with the posters.

Posters with Chief Minister Basavaraj Bommai's face on a QR code titled ‘PayCM' were spotted in a few places in Bengaluru on Wednesday, which was removed by authorities later in the day.

According to reports, scanning the QR code took users to the '40 per cent Sarkar' website launched by the Congress recently.

Raising the issue during the zero hour, BJP MLA Rajeev said the 'PayCM' posters were found in different parts of Bengaluru on Wednesday and a political party was behind it.

Stating that such political developments in the State were leading to a feeling that Karnataka is witnessing political degradation, he said, "PayCM posters with Chief Ministers photo...What evidence (on irregularity or corruption) do they have, if they have any evidence let them file a complaint, instead they used Chief Minister's photo."

As Rajeev initially did not mention as to who was behind it, Speaker Vishweshwar Hegde Kageri asked as to who used it, to which several BJP legislators said "Congress".

Intervening, Congress MLA Krishna Byre Gowda said, "Let Rajeev speak on the notice he has given, he has the right to do so, instead of that if he makes political speech, we will also have to speak".

Rajeev said after the posters emerged Congress spokesperson and MLA Priyank Kharge has given a statement claiming that his party has taken it up as a "campaign."    The Chief Minister is a constitutional post, making QR code posters using CM's photo and pasting it across the city is a Congress-sponsored campaign for political gains," he alleged.

To this, Gowda again intervened and said, if there is anything illegal, take action, instead of making political speech here. "We are ready to face the law," he said.

Pointing at Prime Minister Modi calling the then Congress government in the State "10 per cent government", during the 2018 Assembly poll campaign without any proof, he said, "Are we here to praise your government and its deeds here...If any one had done anything wrong and against the law, take action. Against eight people, a case has been booked and they have been arrested, we have no objection."

Enraged by this, several BJP MLAs stood up expressing their angst at the Congress for the posters and indulging in a false campaign against the Chief Minister and the government without any evidence, leading to some heated exchange between treasury and opposition benches.

Some BJP MLAs said a probe has to be conducted and action should be taken against those involved.

At this point in time, Madhuswamy, stating that he won't go to the level of blaming Congress or anyone else for their role behind the posters at this State and would leave it to their conscience, said however, investigation is on, truth would be revealed.

"What evidence is there for them to use CM's photo? Have we come to such a bad situation to make a CM to go through all this, what is their intonation? When we got to know about it, we requested the CM to get a complaint filed and let the law take its own coerce after which police have taken action. Whether it is Congress or anyone else involved the government will not backtrack," he said.

Madhuswamy, further stating that the government would take action in accordance with the law, said, "We are also thinking about putting an end to misusing cyber, audio or video recording (to malign someone one), if not respectable people can't live."

"We are in public life, mudslinging at each other...We have to question our conscience, where are we standing today...Those who fear for respect cannot continue in politics, such is the situation today," he lamented.