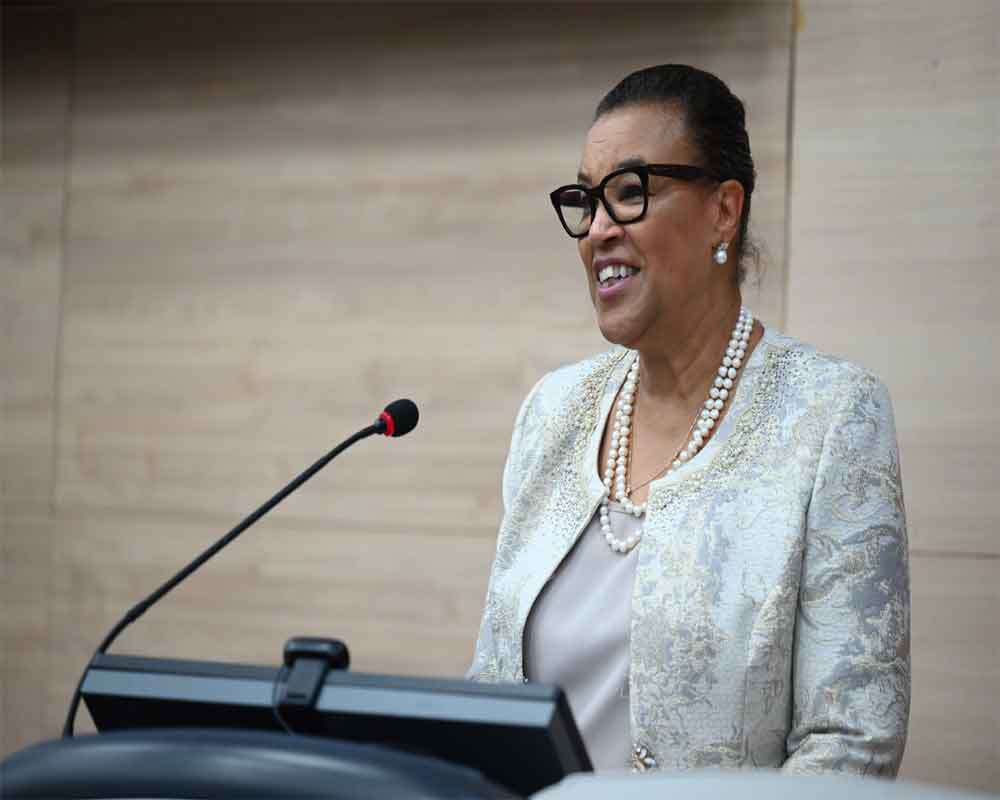 India's "generous" and "multi-faceted" assistance to Sri Lanka to help it deal with its unprecedented economic crisis is "heartening", Commonwealth Secretary-General Patricia Scotland has said.

In an interview to PTI, Scotland also talked about India's prominent role in combating the global food crisis and said that the Commonwealth is working towards bringing about a more holistic approach to ensure food security.

The Commonwealth Secretary-General also hailed India for its assistance to a large number of countries in combating the COVID-19 pandemic, describing it as an "extraordinary act of international service and leadership."

Scotland was in India on a four-day visit last week and held talks with her Indian interlocutors on various regional and global issues like climate change, post-pandemic economic recovery and ways to boost trade.

"India's generous and multi-faceted assistance to Sri Lanka is heartening to see. It exemplifies both the spirit and values of the Commonwealth," Scotland said.

Both India and Sri Lanka are among the 56 member nations of the Commonwealth that make up a quarter of the world's land mass, represent around 2.5 billion people and have a combined GDP of more than USD 13 trillion.

"In spirit, we are a family of nations, and families rally to help one another in times of need. Prime Minister Narendra Modi recently expressed India's support for the quest of the people of Sri Lanka for stability and economic recovery, through established democratic means, institutions, and constitutional framework," she said.

India has extended assistance worth over USD 3.8 billion to Sri Lanka this year to help it deal with the economic crisis.

"The unprecedented challenges Sri Lanka is facing have required, and still require, the dedication and fortitude of its leaders as well as the support of the international community," Scotland said.

On the global food crisis, Scotland said, the world is facing it due to a range of factors such as conflicts, climate change and the economic impacts of COVID-19.

"From the Central American Dry Corridor, through Africa to Asia, the World Food Programme (WFP) describes a ring of fire stretching around the world where conflict and climate shocks are driving millions of people to the brink of starvation," she said.

The Secretary-General said many Commonwealth countries are finding themselves "within or worryingly close to this ring of fire".

"To address the acute crisis, I have called on the international community, of which India is such a prominent part, to offer urgent practical and financial support to the countries and communities most in need," Scotland said.

She said the leaders at the Commonwealth Heads of Government Meeting (CHOGM) in June backed the grouping's efforts to bring about a new and more holistic approach to food security by ratifying a charter.

The charter recognises that the vulnerabilities of ecosystems to land degradation, biodiversity loss and climate change are closely interrelated and need to be considered collectively.

"The Charter will enable us to work closely with countries like India to produce more food and manage the land in a more sustainable way," Scotland said.

The Commonwealth Secretary-General also conveyed to her interlocutors the Commonwealth's appreciation for India's assistance in helping many countries in dealing with the COVID-19 pandemic.

"I expressed our gratitude for India's generosity and support to vulnerable Commonwealth countries during the pandemic, including sharing much-needed COVID-19 vaccines," she said.

"India has supplied vaccines to 98 countries and medicines to 150 countries since the start of the COVID-19 pandemic; an extraordinary act of international service and leadership," she said.

In New Delhi, Scotland also discussed with senior officials of the Ministry of External Affairs about boosting India's trade with other Commonwealth countries.

"India's trade with other Commonwealth members is significant and growing, and India is a key driver of intra-Commonwealth trade in goods and services," she said.

She said the trade relations can be advanced under the framework of 'Commonwealth Advantage'.

"'Commonwealth Advantage' enables member states to trade up to 20 per cent more with each other than with non-members, at a 21 per cent lower cost, on average," Scotland said.

Referring to pressing global challenges, she said India is "critically important" in the fight against climate change.

"India is one of the most exposed countries in the world to the impacts of climate change and it is one of the largest economies," she said

"What India does on climate change really matters in the world," she said.

The Commonwealth Secretary-General also lauded India for its commitment to achieving net-zero emissions by 2070.

"The possibility for India to lead the world in innovating and accelerating the delivery of sustainable development is there -- and it is a prize which could further elevate India's place in the world," she said.

"From oceans to land to the energy transition, the Commonwealth Secretariat is ready and able to use our experience and expertise to assist India," she said.