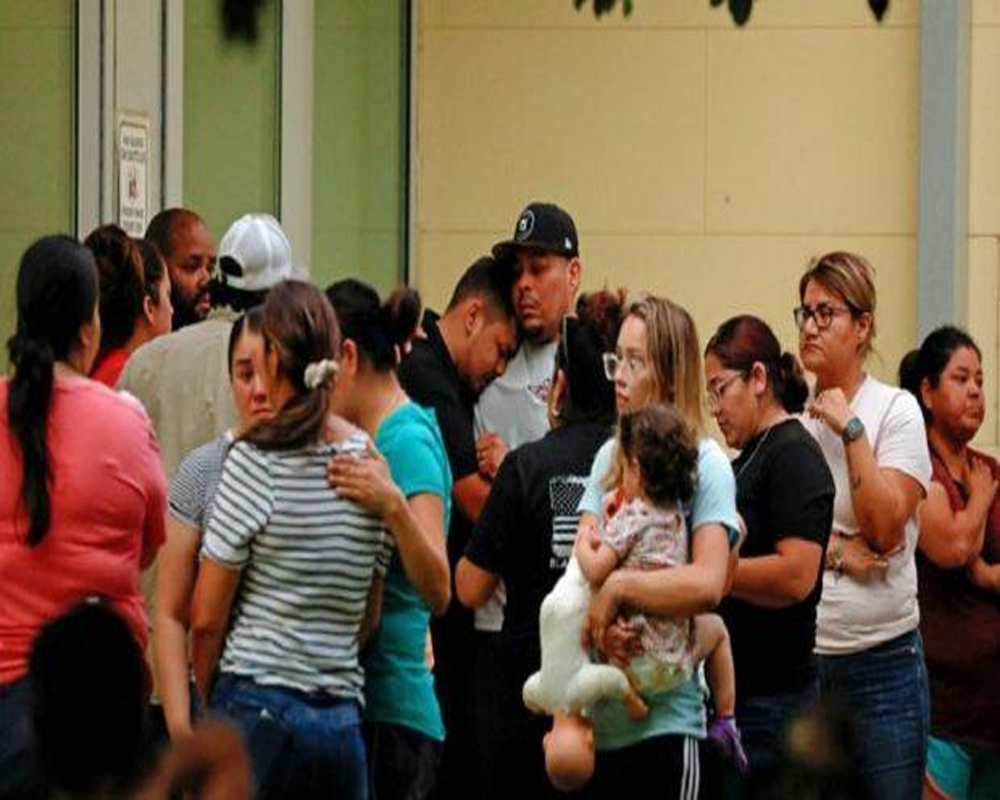 In one of the worst school shootings in American history, an 18-year-old gunman in body armour massacred at least 21 people, including 19 children and two adults at an elementary school in Texas state, with an emotional President Joe Biden urging lawmakers to "turn this pain into action" to control the powerful gun lobby.

The youth opened fire at Robb Elementary School in Uvalde town, Texas, 134 km from San Antonio, at about 11.30 AM on Tuesday before he was killed by law enforcement, officials said.

Investigators say the suspect was armed with a handgun, an AR-15 semi-automatic rifle and high-capacity magazines.

Texas Governor Greg Abbott identified the killer as Salvador Ramos, a resident of the area where the school was located. The shooter's motive remains unclear. The teenager is suspected of shooting his grandmother at the start of the rampage, US media reports said.

"He shot and killed horrifically, incomprehensibly. Fourteen students and a teacher were killed," Abbott said. Later the toll was raised to 19 children and two adults dead. Two law enforcement officers were shot but are expected to recover, Abbott said.

Names of the deceased and other details were yet to be released. According to the school website, its students are aged between 5 years and 11 years.

Chief of Police, Uvalde, Pete Arredondo said the "mass casualty event occurred at Robb Elementary School at about 11:32 this morning". He said the killer acted as a lone wolf - who was shot dead in a police exchange.

The deceased children are in the second, third and fourth grades - aged between 7 years and 10 years, he said.

US President Joe Biden was briefed on the shooting during his return flight from Japan where he attended the Quad Summit.

In a prime-time address on Tuesday, a visibly emotional Biden asked what it would take to convince fellow lawmakers that “it's time to act.”

President Biden again tried to comfort a nation grieving after a mass shooting, urging action to counter powerful gunmakers and repeatedly questioning why the country he leads lacks “the backbone” to stem the bloodshed.

“How many scores of little children who witnessed what happened — seen their friends die as if they're on a battlefield, for god's sake,” said Biden. “To lose a child is like having a piece of your soul ripped away. There's a hollowness in your chest.”

Turning to the issue of gun control legislation, Biden implored lawmakers to “turn this pain into action" as he ticked through some of the mass shootings since the 2012 massacre at Sandy Hook Elementary School in Newtown, Connecticut, when he was vice president.

"I am sick and tired of it. We have to act. And don't tell me we can't have an impact on this carnage," he said, asking: “Why do we keep letting this happen?"

"Where in God's name is our backbone to have the courage to deal with and stand up to the lobbies?” he said.Biden has ordered the US flag to be flown at half-mast until sunset on Saturday, May 28, in memory of those killed in Texas.

The US flag across all public buildings, grounds, military posts, naval stations, naval vessels, embassies, consular offices and military facilities will be in half-mast. In Uvalde, all schools were locked once the gunshots were heard.

In addition to the confirmed deaths, a number of people have been injured. No number of the injured has been released.

Texans across the state grieved for the victims.

Abbott said: "Cecilia (wife) and I mourn this horrific loss and we urge all Texans to come together to show our unwavering support to all who are suffering."

Abbott said he had instructed the Texas Department of Public Safety and the Texas Rangers to work with the local law enforcement to investigate the shooting.

Officials said the city's civic centre was being used as a reunification centre where the kin of victims can procure information from the state and coordinate other functions.

The South Texas Blood and Tissue Center issued a public appeal for blood donations. They have already sent over 15 units of blood and are running out.

There is currently a blood shortage at the local hospitals where the wounded are being treated.

Emergency blood donation appointments are being held on Wednesday.

The shooting stoked the fiery debate on gun control.

Texas Attorney General Ken Paxton said teachers should be armed to stop such incidents in the future.

Speaking to a conservative news outlet, Newsmax, Paxton said "Having potentially teachers and other administrators be armed would help stop future attacks while authorities arrived."

"First responders typically can't get there in time to prevent a shooting. It's just not possible unless you have a police officer on every campus," he said.

"I think you're going to have to do more at the school."

US Senator John Cornyn (R-TX)  said in a tweet: "Today, the entire state of Texas is in mourning. The shooting at Robb Elementary School is every parent and teacher's worst nightmare. My heart goes out to those in the hospital receiving care and to the loved ones of those who lost their lives. As a parent, I cannot imagine the pain they must be feeling."

"I am in touch with local officials in Uvalde and plan to travel there as soon as I can get there. No parent, child, or teacher should ever have to wonder whether it's safe to go to school. This is an excruciatingly painful time for the tight-knit Uvalde community and for all Texans”.

Texas Senator Ted Cruz described the Uvalde shooting as "truly horrific", but said gun reforms were not the way to prevent such crimes.

Speaking to reporters, he said that restricting the rights of "law-abiding citizens... Doesn't work. It's not effective. It doesn't prevent crime."

He said "going after felons" is what prevents such crimes and he criticised other politicians for trying to "advance their own political agenda" by calling for gun control.

He added that from past experience, armed law enforcement on campus is the most effective way of keeping children safe.

"We don't know the details of what happened at Robb Elementary School, but there will be a lot of time to examine what steps could have been taken proactively to enhance the safety and security of the school right now," he said.

CNN and the GVA define a mass shooting as a shooting that injured or killed four or more people, not including the shooter.