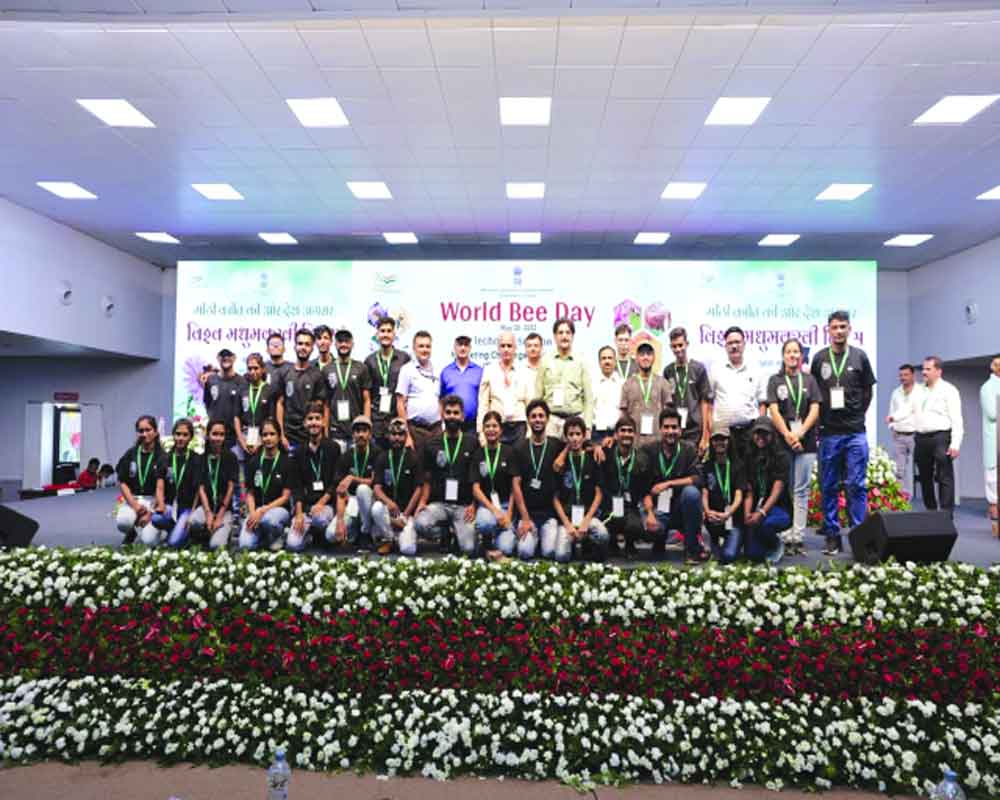 To attract and enhance the relationship with global markets, the Government of India and State Governments are working to improve the quality of honey and collaborating and focusing on beekeeper capacity-building through the use of scientific techniques

To mark the occasion of World Bee Day, a national level function was held in Tent City-II, Ekta Nagar, Narmada, Gujarat on May 20, 2022. It was celebrated with great fervour. The Union Agriculture and Farmers’ Welfare Minister Narendra Singh Tomar mentioned that the Government is working hard under Prime Minister Narendra Modi's leadership to bring about a Sweet Revolution in the country.

He also stated that Modi’s goal is to empower small farmers and approximately 55 per cent of India’s population lives in rural areas and that the country will progress only when the rural population improvises.

With virtually inaugurating honey testing laboratories and processing units at several places like Pulwama, Bandipur and Jammu in Jammu and Kashmir; Tumkur in Karnataka; Saharanpur in Uttar Pradesh; Pune in Maharashtra and Uttarakhand, he also opened an exhibition at the event venue.

Under the centrally-funded National Beekeeping Honey Mission which aims to establish five large regional and 100 small honey and its byproducts testing laboratories, three world-class laboratories have already been established. 25 other small laboratories are on the verge of getting established. The Government is also assisting in the establishment of these processing units.

In India, more than 1.25 lakh metric tonnes of honey is produced and more than 60,000 metric tonnes of natural honey is exported. To attract and enhance the global market relationship, the GoI and the State Governments are working to improve the quality of honey and are collaborating and focusing on beekeeper capacity building through the use of scientific techniques.

Tomar also travelled back in time when Modi was the Chief Minister of Gujarat to recall how he paved a new way for the State’s development. His administration remained committed to the development of Gujarat's poor and small farmers. The State performed well under his leadership in terms of reducing poverty, creating jobs, developing health facilities and making irrigation accessible for farmers.

During the programme, farmers from various States interacted with Tomar and other dignitaries sharing their stories about how beekeeping has increased their income.

Minister of State for Agriculture and Farmers' Welfare Kailash Choudhary, stated that the Government has provided farmers with the necessary resources as well as new technology through various beekeeping schemes and is developing a mission mode to promote beekeeping in order to increase farmer income. According to Choudhary, Modi has worked tirelessly for the betterment of farmers.