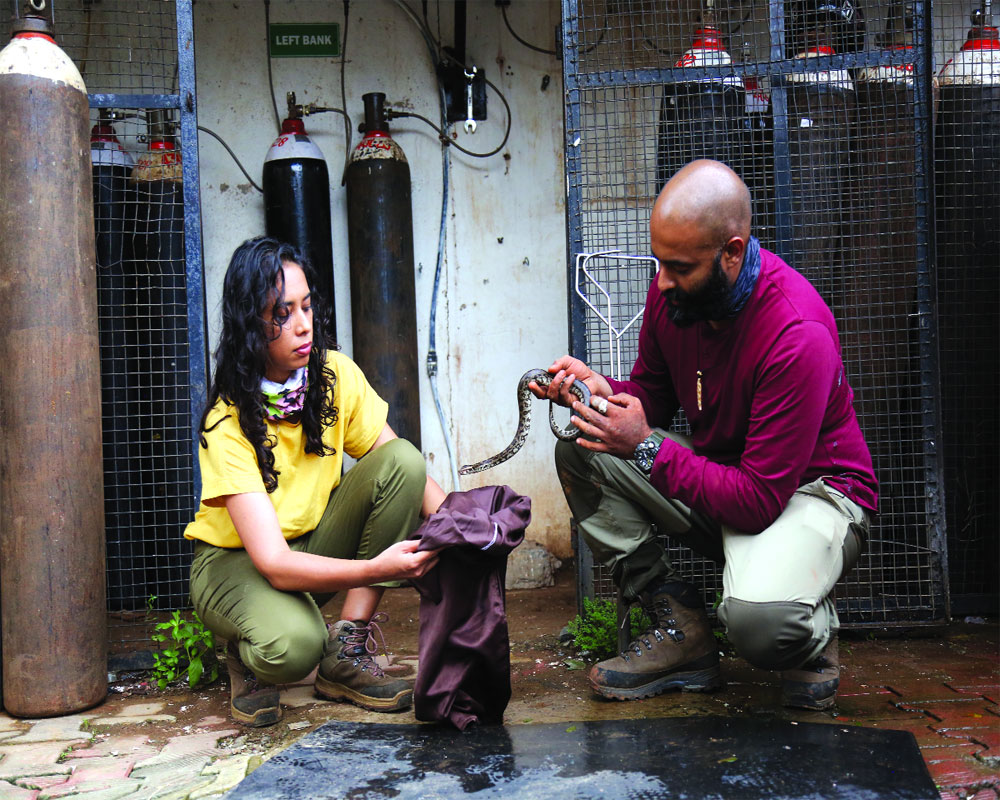 In their new show, wildlife activists Benhail Antao and Louise Remedios embark on a quest to conserve the species and simultaneously bust myths around them by educating the audience that these reptiles are not the danger lurking in the dark. By Khushbu Kirti

The 10-part adventure series is bringing in a spirit of adventure, thrill and adoration for wild animals. The power couple will face and rescue some of the wildest snake species in the most unusual of situations. It showcases the duo in action and giving an up-close and personal experience of their techniques in rescuing the varied snake species and other undomesticated animals through the city of Goa. It is understanding snake psychology 101, if you may.

Read on for excerpts from a candid interview with the adrenaline junkies and wildlife rescuers about insiders from their new series:

National Geographic has introduced an Indian avatar of the show, Snakes in the City. How is it going to be different or how are you Indianising it?

BA: Snakes in the City, or, for that matter, Crocodile Hunter, are extremely different shows. I think Goa’s Wildest is an independent show and has everything unique about it. Right from the snakes — they are Indian species and behave differently — to the places where they’re rescued from. It’s more about the snakes in this programme and more about the people who are encountering the snakes.

I mean, snakes are a problem everywhere. And the way people respond, the culture shown promotes repulsion or aversion. The message that we give through this programme is subtle — I want people to watch this and find between the lines. It’s pretty clear where we stand when it comes to snakes and, the term, conservation. You know, snakes are not that danger lurking in the dark anymore. Snakes never were the danger lurking in the dark. The ideology of the show is pretty different.

What is the aim of the show?

LR: So, first, we want to educate you about the kinds of snakes that are in Goa because this show has been shot there specifically. And a lot of these snakes are also present in different parts of India. People assume we’re either dealing with an anaconda or a rattlesnake or Black Mamba. No, you don’t get those. It’s cool that people are watching these programmes, but they are not aware of the many varieties of venomous, non-venomous and different kinds of snakes that exist here. We want to create awareness.

Besides that, we want people to understand that snakes are like any other animal. You don’t look at them like you look at a dog or a cat, right? There’s a lot of myth and mystery. In India, mythology, which is associated with a snake, makes people more intrigued and more scared of them. People are unable to distinguish between mythology and fact. So, we’re trying to bust these myths. There are so many more questions associated with our mythology when it comes to snakes, which we will be answering in the show. You’ll find that message in every episode.

We also want to set people on the right trend, which will be there maybe even 10 years from now, which is a conservation technique of very ethical snake-rescue, to try and impart empathy into people. Because when you can put yourself into another animal’s shoe, and understand where they come from, you will then feel empathy towards them, you will then understand them, and you will start to admire them.

We want you to understand the difference between fear and danger. We’re trying to conserve the ecosystem, too. If you want to conserve any kind of habitat, you need to protect the animals in them.

You’ve mentioned that there are so many myths around the species. I wanted to know, what are some myths and misconceptions around it?

BA: Yeah, that’s super interesting. What most people know happens to be myths, like, for example, a very, very common myth is that a snake takes revenge. I’ve had people calling me up, like, you know, at three in the morning and saying, ‘I need help’. When I enquire why they say they can’t sleep because they rode over a snake in the daytime and are scared it’s going to come and take revenge. So, it’s no longer any rescue call, it’s more of a counselling call (everyone laughs).

LR: So, what happens is that there are possibilities that these snakes, during mating season, release certain kinds of pheromones and perhaps you know, another snake tracks that and comes looking for the dead snake. These are territorial animals, if they see an open territory, they might come. Also, if it’s a female’s hormones that are put onto your tire or tube, there’s a very small chance that a male will sense that and follow. However, the snake is definitely not interested in you (chuckles). It can also be a coincidence.

BA: Funny how when people are given a choice, they will defer to the most supernatural explanation for it and the most expensive one. I heard of people who go around catching snakes and charging a huge sum of money. They feed people with all these myths, that snakes fly and coil around your neck, or that snakes dance to music.

Wait, snakes don’t dance to music? I mean that’s what the snake charmer (sapera) does, right?

LR: Haha, see! Okay, so, first of all, the snake needs to enjoy the music, right? So, when we enjoy it, we are not scared of it. The fact is that when a cobra spreads its hood, it signifies that it’s scared. The hood is a form of defence. So, it is definitely not enjoying and second, most snakes do not have external ears and cannot hear audible music! They can hear very low-frequency sound vibrations.

Now, why does it shake or give the impression that it’s dancing? It’s because it is scared of that flute. It is following the movement of the hand of the snake charmer. Most of the time, the snake charmer will have a long needle with them to poke the snake so they’re scared of them and their hands. It looks to us like they’re dancing, they’re not.

BA: And they claim that there is a diamond in the head. I mean, that’s not possible. There is no stone or precious stone. If that would’ve been the case, we would have been multimillionaire (giggles).

A lot of times they pluck out the teeth of these snakes. What happens is that there can be a lot of bacterial infections and the snake can die from that. So the charmers pluck out the teeth just in case they come too close to the snake. They stitch the mouth sometimes. It is extremely sad.

I always thought that snakes knew how to protect themselves. If somebody does something like this, don’t they bite?

BA: Oh, yeah, they do bite. Even snake charmers get bitten all the time. I mean, there are snake charmers that die of snake bites and sometimes they pull out the snakes’ fang but don’t notice there is another fang and they’ve died of it.

LR: But usually a snake gets very exhausted. If you provoke the snake, initially it will try to stay away from you, you provoke it a little more, it is going to give you a warning, provoke it still further it is going to bite you with a fake bite. It doesn’t want to waste its venom on you. And then you really provoke, it’s going to severely bite you. When you do it repeatedly, the snake gets scared, almost traumatised and tired. They have no energy to even strike most of the time.

BA: Also, it’s not that every time they strike you, there’s going to be venom, they can control how much venom goes in or doesn’t go. Because that venom is a very important resource. And to produce venom, it takes a lot of energy for that snake and it takes time for it to develop venom back.

Look, the snake doesn’t want to bite you because it knows even if it does bite you with a full dose of venom, you can still kill it before you die. Right? It will still give you maybe like a fake strike, like a warning to leave it alone.

Makes sense. Tell us why did you choose Goa as the location, specifically?

You are a power couple who are luxurious wedding planners in the day and deadly wildlife rescuers at night. How did this dynamic transpire?

BA: I can talk for myself. But we have been passionate about rescuing wildlife and spreading awareness. I’ve been doing this for the last 19 years now, spreading the message of conservation.

LR: So, when my mom asked me about Ben, when we were dating, and what he does, I told them.  My father was like, really? My mom surprised me. She said, ‘you know, baby, I always thought you’ll marry someone like this. You’ve always been one wild child. Now we’re hashtag Goa’s wildest (chortles).

That’s one sweet story! How does it feel to have your entire passion turned into a show that the entire world is watching?

LR: I will say it’s better than a dream because nobody dreams of such things as being associated with National Geographic. I remember my neighbour picked up about 50 magazines and I read them every single day because it is such a huge platform. So, when something like this happens, it is an incredible feeling — nobody plans for these things. And if you work hard, and you have a little bit of luck associated with it, as well, and you’re passionate about something. I mean, this is a dream come true.

BA: This awareness programme that I’ve been doing for the last 15 years in schools, colleges, gatherings, and the most, I’ve taught like 1,000 people, but the most effective is when I’m rescuing the snake at somebody’s house. If we can spread the knowledge to the entire world this way, I’m grateful and content.

Benhail, you said that you were in this for 19 years now. What intrigued you to get into the profession?

BA: Uhm... it never was a profession, always has been my passion. What intrigued me is I’ve always liked wildlife. I come from a background where in my grandfathers, my uncles were hunters. I was brought up in a way that the fear of any wildlife was not instilled into me.

When I was eight years old, I remember being called by a neighbour to go and kill a snake that had entered his bathroom. That’s when I realised that killing was not the only option. I could handle the situation differently. There was no internet or books that could teach me the procedure. I’ve had my fair share of bites and stuff like that. Snakes don’t appreciate that they are being rescued because they don’t know they’re being rescued. So, experimenting and not resorting to violence was how I learnt and I want to make others aware of the same.