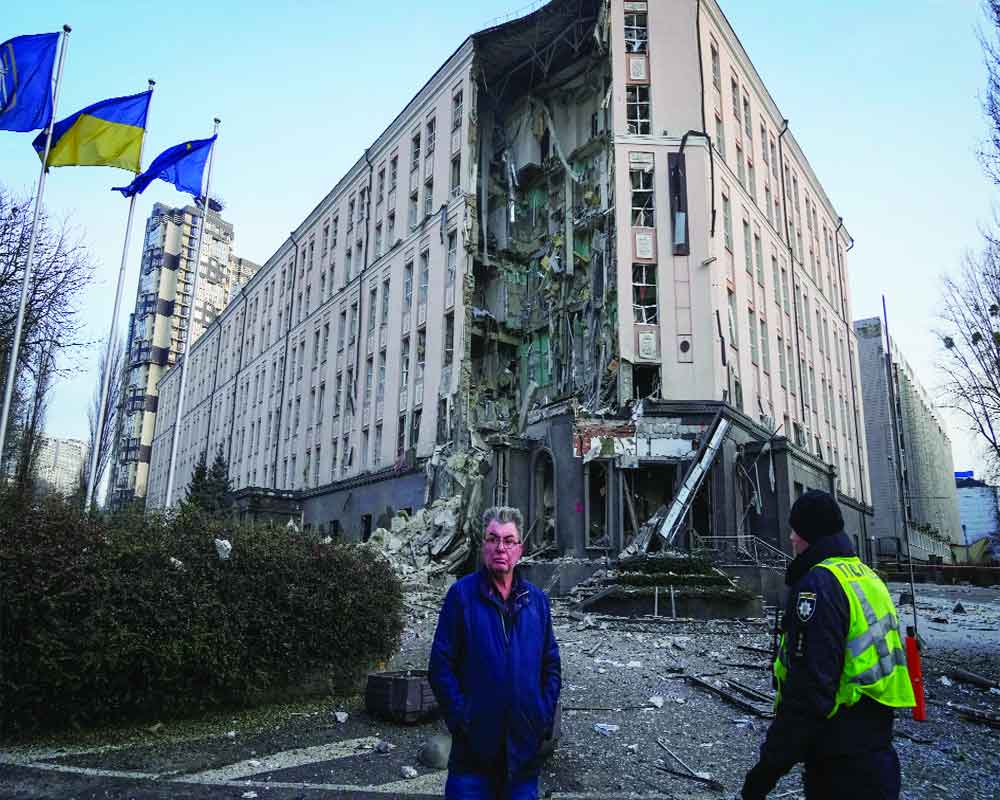 The war in Ukraine is devastating and tragic. It has been ten months now. It demonstrates the strained relationship between Ukraine and Russia not only in the present, but also in the past. Russia’s claim over neighbouring Ukraine is a historic question. Nevertheless, the recent claims spearheaded by Moscow’s armed intervention on February 26 last year clearly exposed the rifts between the two nations and Putin’s agenda. We all need to grapple with the reality that Ukraine was an integral part of the former USSR till its breakdown in the year 1991.

Experts opine that the spy guy Putin has been looking for an opportunity to go to war with Ukraine to rebuild the former Russian Empire. In an age of globalisation propelled by the digital revolution, we all talk, celebrate, and claim our rights and liberties in a way that we never used to be. When big tech and other business conglomerates are encroaching upon the very sovereign rights of the contemporary nation-state, the latter is trying to guard the same jealousy. At this juncture, ever ambitious autocrats like Putin are hoping and struggling to chase sovereign rights of a neighbour. Alas! The whole world is watching it helplessly by simply offering arms and ammunition to the embattled regime of Volodymyr Zelenskyy.

When we flip the pages of recent political conflicts in Europe, we observe that Russia’s frontal war with Ukraine began in the year 2014. In that very year, in February-March, the Russian Federation under the leadership of Putin occupied Crimea, a southern peninsular area from Ukraine. For Putin, he all has the right to protect the rights of its compatriots in Crimea. Since then it has been more than eight years now Russia is at loggerheads with Ukraine, although there has not been any direct confrontation with that country unlike the one that started last year.

How is Putin managing global support for his aggressive war against Ukraine? Clearly, Putin is receiving both direct and indirect support from two big powers for this massive war — India and China — albeit in different ways. Indeed, both these nations are not exerting sufficient pressure on Putin to stop the war. Delhi is either abstaining or refusing to vote on the sanction imposed on Russia at the UN.

However, unlike fence-sitting China, India has been maintaining a clear stance that “it is not the right time for war” as the whole world is just coming out of a deadly Covid-19 pandemic. Delhi is sending clear signals in public and directly to Putin that it’s ready to mediate to end the conflict and urging Putin to end the war. So, India is on the side of peace; but this is not enough for a regional power like India.

On the other hand, China under Xi Jinping is happy to see Russia engaged in a war that is firmly challenging the western hegemony in Europe. In that case, Beijing and Moscow are on the same page; but the world should not forget the fact that both these nations are also competitors at various global forums. Neither Putin nor Xi would accept a subordinate role in the global stage. Therefore, Xi’s friendship or ties with Putin is just a marriage of convenience at this moment. Frankly, Putin is fighting a war with NATO or with the top western powers which Xi is preparing to do for quite some time. Again, both the countries are interdependent in the sense that they are a part of a global coalition to craft a new global order to fight and replace the liberal global order that has been dominating the world since the end of the Second World War under the leadership of the US.

Today, Ukraine’s 43 million people are facing a dark future as the country is devastated under the Russian attacks. Neither they are hoping for an immediate end of the war, nor are they receiving any relief from their economic hardship. Banks are closed, transport systems are suspended in most parts of the country and markets are completely empty.  The normal life is shattered. Every single day, war clouds are hovering over Kiev and Kharkiv, a strategically located city just 25 miles from the Russian border. Further, this war town is a midpoint between the already occupied regions of Luhansk and Donetsk in the east and the capital of Kyiv to the west.

Zelenskyy is made a hero out of this war. His resistance is spectacular. He garnered support both from the US and Europe to save his country with financial and military aids. He has been fervently struggling to safeguard the sanctity of his nation. So far, he has been able to make his point in all the global forms, including the UN. And therefore, Russia and Putin are equally worried that the West is mounting both sanctions and pressure on Moscow.

Putin is finding no way out. The Czar is equally helpless and reckless. But neither Putin nor Zelenskyy is ready to surrender. However, Moscow has recently claimed that he is ready to negotiate with Kiev. But it is surprising that despite sending signals for negotiation, Putin has mounted devastating attacks on Kiev and other strategic locations in Ukraine. The end result is the suffering of the common people, particularly women, children, elders and the sick. Above all, Putin must put this war to an end at least on humanitarian ground.

Russia and Ukraine are two countries that have been intertwined for almost 1000 years. Their separation and subsequent developments in Europe and around the world have entirely changed the geopolitical situation in the region. And clearly, Putin was threatened by the NATO encirclement in and around Russia. His concerns were not addressed by the West and forced him to go to war. It is a fact. But that can’t be a justification for Russia to attack an independent nation.

Slavik kinship, extensive intermarriage and long cultural bonding have made Russia and Ukraine not only common European brethren, but also their historical longing for future reunions in border areas. But can it be done by an aggressive war as launched by Putin. No way. Though they are historically and culturally connected, a forceful political reunion could cost both the Russians and the Ukrainians dear. Hope this New Year 2023 will bring sense to Putin to put an end to this bloody war. At the same time, the West under the leadership of the US must understand the growing pain of a new Russia that wants to set the course of global political leadership under Putin. This war is an indication of that. The US and Europe must be getting ready for Putin-like ambitious and aggressive statesmen in the days to come who would challenge the already ailing and aging western liberal order.