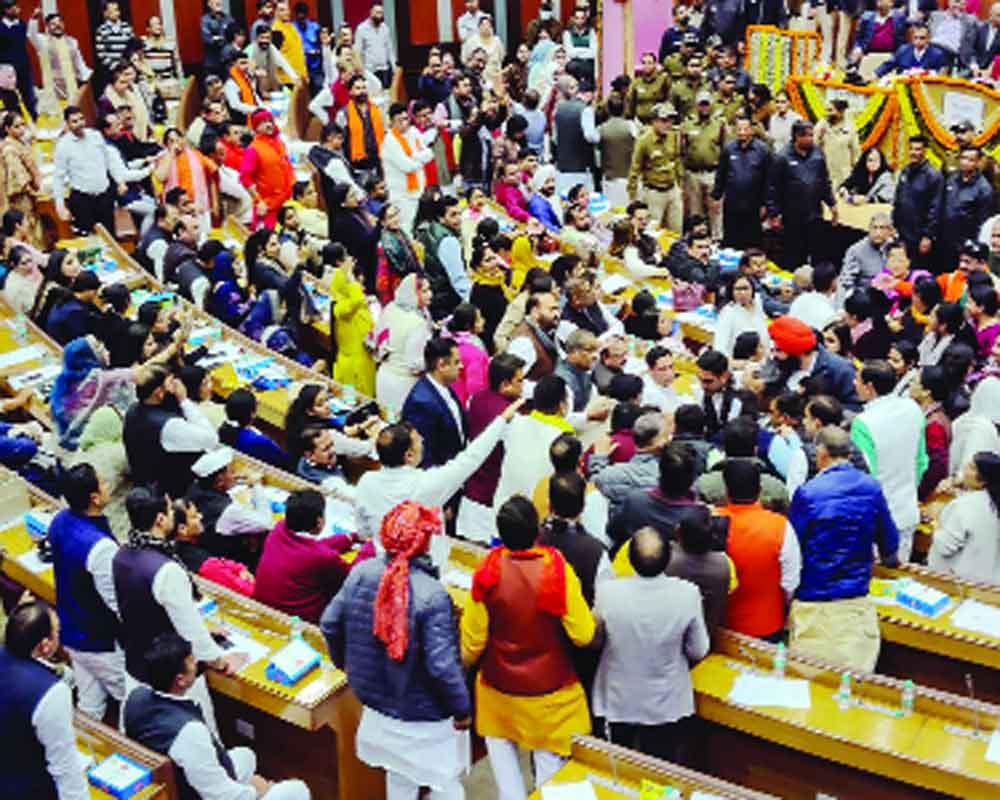 The Municipal Corporation of Delhi (MCD) could not elect its Mayor for the second time on Tuesday as its proceedings were adjourned sine die following a ruckus between AAP and BJP Councillors.

This was the second attempt of the MCD to elect its first single Mayor in 10 years following the unification of its three divisions last year.

The House was adjourned soon after members took oaths amid sloganeering by both the AAP and BJP Councillors. The adjournment prompted Councillors, 13 MLAs and three Rajya Sabha MPs of the AAP to sit on a “dharna” for nearly four hours against the BJP.

They sat on dharna at the Civic Centre, demanding immediate polls.

Both the BJP and AAP members held each other responsible for the derailment of the proceedings.

The Lt Governor-nominated members took oath first despite AAP councilors’strong objections to it.  Presiding officer Satya Sharma then called on the elected councillors to take oath even as he drew flak from the AAP councillors.

The proceeding went largely smoothly till the councillors and nominated members were administered the oath. After the oath, the House was adjourned for 15 minutes during which several BJP councillors left their seats and raised slogans.

During this break, several BJP councilors started moving into the House chanting ‘Modi-Modi’or Modi zindabad. They also raised slogans against the AAP convener and Delhi Chief Minister Arvind Kejriwal. Further, there was a heated discussion between BJP and AAP members in one of the aisles of the MCD House. A few councillors from both parties then entered into a heated exchange on one of the aisles of the House following which the Presiding Officer adjourned the House without holding the poll.

“A House cannot run like this. This House is adjourned till next date,” Sharma said.

All AAP councillors, their 13 MLAs and three MPs sat in the House and demanded BJP councillors come back so that the Mayoral polls could be conducted.

Enraged by the move, the AAP accused the BJP of adjourning the House because it does not have the number for mayoral polls. AAP MLA Durgesh Pathak, who along with his party’s members sat on a “dharna” in the House, demanded that BJP councillors return to the House for the Mayoral elections.

“The BJP doesn’t have numbers that’s why he has adjourned the House. All our councillors are sitting here. If you have guts then come and get voting done. Respect the mandate of the people of Delhi,” Pathak said. “We will not leave the House until the BJP councillors return and polls are held. We will sit here until the elections are conducted,” said Pathak.

Refusing to vacate the house, the AAP councillors spent their time singing religious hymns and patriotic songs. Some of the songs were: ‘Achyutam Keshavam’and ‘Raghupati Raghav Raja Ram’. AAP members called off their “dharna” around 7.30 pm amid chants of ‘Bharat Mata ki Jai’and ‘Arvind Kejriwal Zindabad’.

In the meantime, Rekha Gupta, the BJP’s Mayoral candidate and a three-time councillor from Shalimar Bagh, also staged a dharna at the Civic Centre in Central Delhi. Gupta claimed that the AAP started the ruckus that led to the adjournment of the House. “One of the AAP councillors, Praveen pushed our female councillor and I complained to (AAP MLA) Atishi about the incident. She hid him behind her. They were laughing and shoving. It is very shameful of them,” Gupta said.

Later slamming the BJP for creating hurdles in smooth mayoral polls, Delhi Deputy Chief Minister Manish Sisodia on Tuesday asked the BJP to accept their defeat in the MCD polls and help ensure smooth conduct of mayoral elections. Sisodia, has accused the BJP of “running away from the election of Mayor”.

“Everyone saw the drama of the BJP. The public had got fed up with their rule in the MCD. They gave mountains of garbage to Delhi and ruined the entire Capital,” Sisodia said. “First, they avoided MCD elections and when the public showed them the door, they ran away from the election of mayor,” he said.

The House proceedings were reconvened on Tuesday to elect Delhi’s Mayor and Deputy Mayor amid heavy deployment of civil defence volunteers, personnel and marshals. The House had seen unprecedented chaos earlier this month (January 6), including fistfights and exchange of blows just weeks after the national Capital had elected its councillors.

This is the second time in the 15 days a ruckus led to the adjournment of the house and the mayor could not be elected.