Meerut erupts in protest against NSA slap on Som

Meerut erupts in protest against NSA slap on Som 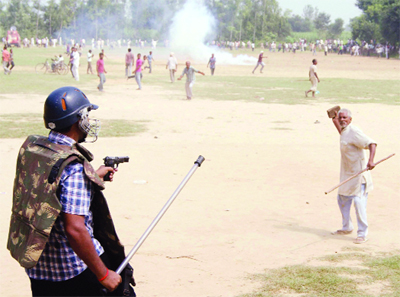 Fresh trouble erupted in Uttar Pradesh on Sunday when villagers protesting against the arrest of BJP MlA Sangeet Som fought a pitched battle with police and torched Government property in Kheda village of Meerut, forcing cops to lob teargas shells and resort to lathi-charge before firing in the air.

The State Government said the situation in Kheda village was normal and 24 persons had been arrested so far. It said that Army had been put on alert and more forces had been rushed to Meerut to strengthen the security.

Home Secretary Kamal Saxena and Inspector General of Police (law & Order) RK Vishwakarma told the media in lucknow that the mob damaged and torched around 12 vehicles of the security personnel, and 20 persons, including policemen, were injured in the violence.

“The wife and brother of BJP MlA Sangeet Singh Som are responsible for the violence and FIRs have been registered against them,” Saxena said, while admitting that as the villagers took the field route to reach the spot, they could not be prevented from holding the mahapanchayat. Saxena said the police opened fire in the air when the protesters tried to attack DIG, SSP and DM but no one was injured in the firing.

He said 32 companies of Central forces were present in Meerut and several companies of PAC and district police were maintaining law and order in the district. There were reports of a youth succumbing to police bullet but officials denied it.

“No one has been killed. One person was injured and has been admitted to hospital. He is out of danger,” ADG (law and Order) Mukul Goyal said.

The villagers of at least 24 villages had convened a mahapanchayat at Janata Inter College in Kheda to protest the arrest of Sangeet Som and slapping of National Security Act (NSA) on him.

In apprehension of trouble, the District Magistrate had on Saturday banned the mahapanchayat and imposed prohibitory orders in the village. The administration had also deployed a large contingent of security personnel to prevent any untoward situation.

Police said that on Sunday, over 10,000 villagers including women, came to Kheda village through fields, defying Section 144 of the CrPC. They were adamant on holding the mahapanchayat but were somehow persuaded by officials to hand over their memorandum without holding the meeting The trouble started during the handing over of the memorandum of demands when there was a confrontation between villagers and police and the cops pushed the protesters back, using force.

In retaliation, the agitated villagers pelted stones and allegedly fired at police, forcing cops to lob tear gas shells and open fire in air to disperse the mob. Eyewitnesses said that many villagers sustained injuries in the lathi-charge. A similar mahapanchayat held in Muzaffarnagar about a month back had triggered riots that claimed the lives of 48 persons and left at least 50,000 homeless.

Sangeet Som was booked under the National Security Act earlier this week for allegedly making hate speeches and distributing a fake video on his Facebook page. The two-year-old video, of killing of two men, was shot in Pakistan. Another BJP legislator Suresh Rana has also been booked under NSA.