Tirupati rises as one against Islamic varsity

Tirupati rises as one against Islamic varsity 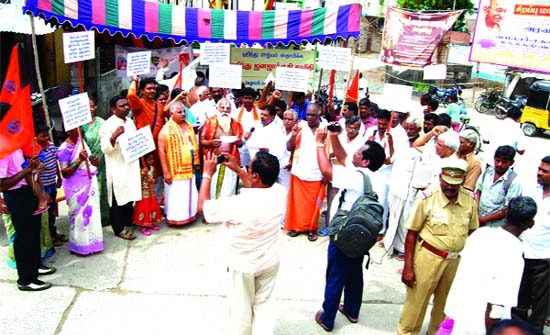 Hundreds of activists of various Hindu organisations staged a demonstration on Sunday at Arani, the Silk Town, 132 km west of Chennai, in protest against the setting up of an Islamic university at the temple town of Tirupati, abode of lord Balaji and Goddess Padmavathi.

People of all faiths and political affiliations in Tirupati, have expressed strong reservations against the Islamic university, which has been built on land belonging to a centuries old temple.

The Pioneer had recently published a report about Heera International Islamic College-Women's Arabic College and Nowhera Shaikh, a mysterious woman who is founder of the project. Sunday's demonstration, organised by Hindu Janajagruti Samiti, an umbrella organisation of various Hindu outfits, saw the participation of many sadhus and sannyasins.

“The Islamic university coming up at Tirupati is a hidden motive to destroy Hindu culture and temples. Babur came to India and built the Babri Masjid near Ayodhya, Aurangzeb built mosques near Kashi Vishwanath Temple and Mathura's lord Krishna temple. We will not allow this to happen in Tirupati,” said Uma  Ravichandran, co-ordinator, HJS.

She pointed out that Muslim residents of Tirupati have also come out openly against the Islamic university. “There are hundreds of local Muslims who worship at the lord Balaji Temple everyday without fail. For them, the temple is part of their life and heritage. They are afraid that Islamists from West Asian nations would try to enforce Shariah law in Tirupati and that could lead to serious social problems,” said Ravichandran.

The demonstration and protests against the Islamic university has been launched with the blessings of various Hindu acharyas. “We called on Sankaracharya Jayendra Saraswathi, the pontiff of the Kanchi Mutt, and he asked us to go ahead with the protests,” she said. The next demonstration is at Madurai on October 25.