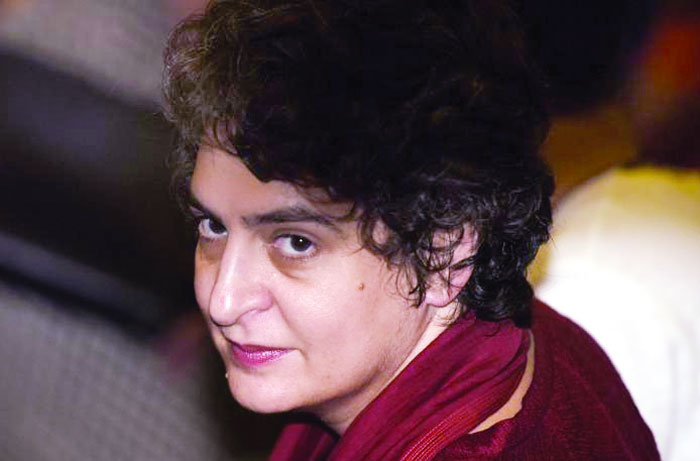 It is common knowledge that one family member of the Nehru-Gandhi family — Rahul Gandhi — is very active these days, but at the same time, people have started enquiring about Priyanka. In recent times, there has been no news about her; she used to look after Sonia and Rahul’s constituency, Raebareli and Amethi. She even visited these places often but has not been seen there for a long time.

Priyanka and her supporters had gone quiet just before the decision to give the party command to Rahul was taken. It is being said that Sonia had clearly stated that only Rahul would be the party president. After that, Priyanka decreased her activities according to a well thought-out strategy and instructed her followers to keep mum.

A Congress leader says that some time ago, a few party leaders had planted the news that Priyanka would be the general secretary in Rahul’s team. This news went viral and the party’s media chief had to give a clarification that she was, in fact, not going to take any post.

Sources in the Congress say Sonia doesn’t want two power centres once Rahul assumes charge. If Priyanka had been active like earlier, there would have been questions on Rahul’s command. Apart from this, questions could also have been raised over the Vadra issue. So, to establish unquestioned command of Rahul, Sonia decided to quit the party president’s post and to keep Priyanka away from active politics.

Though this decision is temporary and there might be some place in the scheme of things for Priyanka but only after some time. Priyanka might be pushed into active politics just before the lok Sabha Elections. By that time, Rahul would have been declared the PM candidate by the party and if action against Robert Vadra speeds up, then the Congress will link that to election vendetta, hoping it goes in favour of the party.

On the other hand, many leaders of the Congress are certain that Rahul will not succeed. These leaders will give the slogan: “Priyanka lao, Congress bachao” after the Gujarat elections. If Priyanka doesn’t enter active politics before the lok Sabha polls and if the Congress doesn’t perform well, then the party leaders will demand that Priyanka takes the front seat.

Apart from Priyanka, Varun Gandhi is the other member of the Nehru-Gandhi clan whose political actions spell uncertainty. On November 19 — the birth anniversary of his grandmother, Indira Gandhi — Varun tweeted something that caused ripples in the political arena. He wrote that Indira was the mother of the nation. He also wrote that courage is the most important quality because you can’t keep other qualities alive without courage.

He has been quiet after this tweet, but in the political circle, people are waiting to see his courage. When Rajnath Singh was the party president, Varun was the general secretary and in-charge of West Bengal. But he is still finding his feet in the current scheme of things.

Before the UP elections, some said he might join the Congress and the party might even declare him as the CM candidate. In pre-poll surveys, Varun was declared as the most popular candidate for the CM’s post. However, he was apparently told to decrease his activities and as a result, he didn’t campaign for the party. That is why there is speculation that he could change his stance.

In Maharashtra, the BJP has sidelined Narayan Rane, who formed his own party leaving the Congress, ostensibly under the pressure of the Shiv Sena. Before forming the Maharashtra Swabhimaan Paksh, Rane had resigned from the MlC post also. He was hopeful that in the by-elections for the same MlC seat, the BJP would support him but that didn’t happen.

Instead, the BJP gave the ticket to Prasad lad, who had joined the party after leaving the NCP. For victory in the by-election of one seat, 145 votes were needed and the BJP has 122 MlAs. The party was well aware that its candidate could not win without the support of the Shiv Sena. On the other hand, the Sena was ready to field an alternative candidate with the help of the Congress and NCP.

Sensing the situation, the BJP didn’t support Rane and gave the ticket to lad. There was a lot of controversy because Madhav Gadgil, an old worker and spokesperson of the party, was expecting a ticket. However, the BJP candidate would win now.

Now the question is what will Rane doIJ He is not expected to get any chance till the BJP-Sena alliance is intact. He could find an opportunity only when both parties part ways and this could be possible only at the time of elections. So, Rane will now instruct his son to remain in the Congress so that he continues to be an MlA.

Now, there is no chance that former IAS officer and former Rajya Sabha MP of the JDU from Bihar would become a Rajya Sabha MP again. In 2014, when Nitish Kumar decided to not send him to the Rajya Sabha again, he had left the party and joined the BJP. He was hopeful that he would get a good position in the BJP. When the BJP came to power, his expectations went up.

However, even after three years of waiting, he has not got any constitutional post. Now, the Government has made him the chairman of the 15th Finance Commission. For the next two years, he will decide the formula for distribution of revenue between the Centre and States. Along with that, he will advise the Central Government on ways to bolster the country’s economy.

NK Singh is 76 years old, and many leaders, especially from Bihar, say this might be his last assignment. His tenure will come to an end in October 2019 and after that, he might not get any post. This must be noted that former Finance Minister Yashwant Sinha had said that the Government should constitute the Finance Commission without delay, and suggested Vijay Kelkar’s name for the chairman’s post.

Many leaders of the Congress have already declared Rahul as the PM candidate for 2019. Former Central Minister and leader of UP Congress, Jitin Prasada, said as much. But Rahul’s candidature will depend upon the Gujarat election result. If the Congress wins, then the Opposition parties might reject the idea of fighting under the leadership of Rahul. At least two parties, the NCP and TMC, are trying to project their own leaders. If the Congress loses in Gujarat, then they will find an opportunity.

A senior Congress leader says Gujarat is an agni pariksha for Rahul, and will indicate whether or not an election can be won under his leadership. Almost all Opposition leaders are keeping a close eye on this. If the Congress wins in Gujarat or gets 90 seats, which would bring it on an equal footing with the BJP, the Opposition will have to accept Rahul as its leader and fight under him. But if the BJP registers an easy win, then the Opposition will keep looking for an alternative face.

This is also possible that the Opposition parties might put pressure on the Congress to not present any face. A TMC leader suggested the 2004 formula, when the Congress had not put forward any face and had given the command to Manmohan Singh after the results. The Opposition might suggest that the Congress fights without any PM candidate. But no new party is ready to join the alliance and this is the biggest problem for the Congress leaders who are trying to form a UPA 3. The other problem is that the regional stalwarts, who are very strong, don’t want to leave many seats for the Congress.

If the Congress doesn’t win Gujarat elections, then it will face problems in going into an alliance with the DMK and TMC. Sources say that both parties are going to offer only five seats for the lok Sabha Elections. That is why people are saying that many things are at stake in Gujarat elections. If the Congress puts up a good fight, it will be considered as the natural alternative for the BJP. In that case, the Opposition parties will not only go into an alliance with the Congress but also accept Rahul as their leader. If not, things could get even tougher for Rahul.

THE SEAT FORMUlA IN UP

The three main Opposition parties in Uttar Pradesh are fighting local body elections not only to either save or increase their seats, but also to show their strength. They want to prove their might not only to the BJP but amongst themselves as well. That means this election will prove which party - the Congress, BSP, or SP — has maximum strength in UP politics.

However, this is almost clear from the past few elections that the Samajwadi Party is the strongest. But the BSP is not ready to accept this, and the reason is its vote bank. It used to get around 18-20 per cent votes even though it didn’t get seats. That is why it is being said that the SP, BSP, and Congress will discuss ticket distribution on the 2009 formula.

In the last Assembly Elections, only seven MlAs of the Congress had won, and before that in the lok Sabha Elections, only Sonia and Rahul could manage to win. On the other hand, the BSP got 19 seats in the Assembly polls and didn’t get even a single one in the lok Sabha Elections. So, both parties think that if a mahagathbandhan is formed, the seat distribution must be on the basis of 2009 results. If there is any talk for an alliance between the Congress, SP, and BSP, then sources say that all three will press for equal seats.

The three parties are considering the 2009 lok Sabha Elections as basis for ticket distribution. They are saying that the 2014 election is an exception, which was fought under the great Narendra Modi wave. The BSP didn’t get any seat in that election, while the Congress got only two. In 2009, the Congress had won 21 seats, and the BSP had got 20. That means these two parties had got more or less same number of seats. So, some of the leaders of the Congress and BSP have unofficially agreed over this formula, but the SP is not on board. So, all three parties are trying to prove their might in the local body elections, and the results will help them agree upon a formula for ticket distribution.