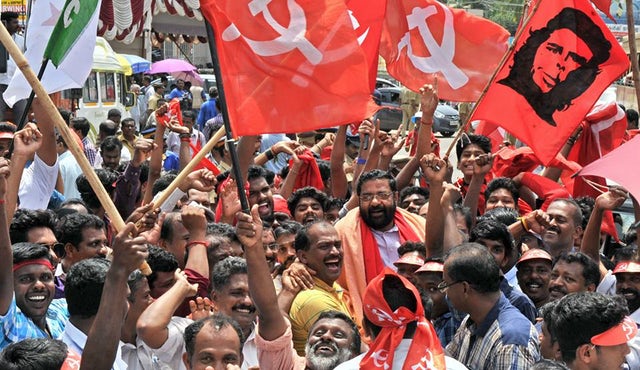 An alliance between the communists and the jihadis in Kerala is not new. But if they form a counter against the nationalist forces, its impact will be disastrous not only for India but for the entire world

Pointing towards the recent incidents of Islamic State (IS) sympathisers being arrested from “party villages” of Kerala, Rashtriya Swayamsevak Sangh sahsarkaryavah (joint general secretary) Dattatreya Hosabale said, “There is definitely some nexus between jihadi terrorists operating in Tamil Nadu, Karnataka and Kerala and the Communist Party of India (Marxist) cadres.”

However, this is not the first time when someone has spoken against a brewing alliance between the Indian communists and radical Islamists. In April 2013, Tarek Fatah, author of Pakistan-origin, reacting to the cancellation of his lecture at New Delhi’s Jamia Millia Islamia said, “The alliance between Islamist and leftists — Sharia’h-Bolshevism is a dangerous threat to free speech and democracy”. What needs to be added here is that the nexus between the communists and radical Islamists is not only limited to the southern States or in India, but it is a global event.

But even as the ultra-religious, radical Islamists and atheist communists are diametrically opposed to one another, an alliance between them is most unlikely. This because the communists find Islamic radicals’ bigotry and intolerance  repugnant. On the other hand, the Islamists emphatically and unambiguously reject almost each and everything that the socialist left claims to stand for or has stood in history. In almost every country, radical Islamists are not only forming an alliance with the communists but are also being their comrades de guerre in a fight against the common enemies, which varies from country to country and region to region.

For example, thinking of destroying the United States, Ilich Ramírez Sánchez (Carlos the Jackal) argues that it can be done only by a coalition of Marxists and Islamists. President Mahmoud Ahmadinejad of Iran, a fervent believer of the Islamic principles and President Hugo Chávez of Venezuela, a committed socialist, hold each other’s hands and the UK Government had been persuaded to fund a conference on Muslims in Europe which was attended by Sheikh Yusuf Al-Qaradawi, a prominent Muslim leader, who has expressed support for suicide bombings in Israel.

Ghaffar Hussain, in his piece titled, ‘An Unlikely Alliance’ for The Guardian said, “The old rule that ‘the enemy of my enemy is my friend’ seems to be shaping the relationship between the hard left and Islamists in Britain today. By having a common foe in Western capitalism, which they conveniently blame for all of the world’s ills, they have developed a marriage of convenience against the odds”. As an example of this unique Westophobia-inspired relationship, he pointed out the respect coalition, calling it an eclectic cocktail of Islamists and leninists. And being “a unique party indeed, in that it throws together secular and theocratic advocates of totalitarianism. The hard left’s and the Islamists’ struggle against the West is coupled with the Soviet nostalgia of the former and the latter’s caliphate mythology”.

David Horowitz, in his book, Unholy Alliance: Radical Islam And the American left, argues that the left in America has ideologically allied with the Islamists and this alliance is working hard to extend its influences not only in the media and the academia but also in the administration. As an evidence, he says that along with the Che Guevara t-shirts, which used to be fashion statement of the leftist young college students, now it is common to see Palestinian colours with radical anti-Zionist themes.

The attempt to form a unity or alliance between the communists and the Islamists in India is not something new. In 1939, the Communist Party of India (CPI) passed a resolution based on a paper titled, ‘Pakistan and National Unity’, written by Gangadhar Adhikari, a communist leader who was briefly the secretary of the CPI.

The paper was not only an endorsement of the Muslim league’s demand of Pakistan but it also showed the willingness of the CPI to back it. Independence came with partition and in Islamic Pakistan, there was not much space for the communist parties or ideology. As during the Cold War, Pakistan allied itself with the US and not only became a member of the US-led groups like the Central Treaty Organisation and the Southeast Asia Treaty Organisation but played a major role in ousting the Union of Soviet Socialist Republics from Afghanistan by training the Mujahideen to fight Soviet forces.

Communists survived as a major force in India because of Jawaharlal Nehru who supported them in monopolising not only academia but even media and other important opinion making institutions. But despite the setback which the communists received from Pakistan, they never gave up hopes of being able to form an alliance with radical Islamists in India. As both were equally opposed to Indian nationalism, which for the communists, was a bourgeois nationalism and for radical Islamists, a religious nationalism of Hindus. There always remains a possibility of symbiosis in which Islamists get intellectual and institutional support from the communists in exchange for providing electoral base as Muslims constitutes a major proportion of the population in India.

Kerala can be said to be the field where the model is being tested as in comparison to any other State because first, communists as well as Islamists are the strongest in Kerala where their presence brought the culture of political violence in the State which dates back to pre-independence times. Moreover, in 1957, Kerala became the first State in India to choose a communist Government. Second, it has a substantial Muslim population. And third, Kerala is one of the leading States for workers’ migration to the Gulf countries following the oil crisis of 1973 and they shares a special bond with West Asia and also get influenced with its economic, social or political developments easily.

Here approximately every third house has a person working in the Gulf and remittances constitute almost 35 per cent of Kerala’s gross State domestic product. Remittances played a major role in human development of the State which is at par with that of developed nations despite negligible industrial base. But along with remittances also came the Islamic radical ideas.

Ideally, the communists should have been opposed to the growing religious fundamentalism but they deliberately chose to not only remain silent but made an alliance with communal organisations in their common fight against the nationalist forces being represented by the RSS cadres. The result of which is that the once peaceful god’s own country, today tops not only in political violence but even in numbers of IS recruits.

Natalie Tecimer, in an article titled,  ‘India and the Fight Against Islamic State’ in The Diplomat wrote, “Kerala is likely a hotspot for IS recruitment because some self-radicalised individuals, who have joined the IS and travelled to Iraq, Syria, or Afghanistan have returned to Kerala and recruited others. Additionally, the Indian Mujahideen (IM), a home-grown Indian terrorist group, has a strong presence in Kerala and after a known IM militant, Muhammad Sajid, was killed in Syria, the links between the IS and the Indian Mujahideen became clearer. Both the IM and the Students' Islamic Movement of India (SIMI), another radical Islamic organisation, with a strong presence could help push the already radicalised youth toward the IS or serve as direct recruiting platforms.”

There are around 172 million Muslims living in India and most of them are peaceful as well as more tolerant than their co-religionists which may be because of their Hindu ancestry. There are the reports of Maoists joining hands with jihadis. And, if the experiment of alliance between the CPI (M) and the jihadis in Kerala succeed in forming a counter against the nationalist forces, its impact will be disastrous not only for India but for the entire world.

(The writer is a post-graduate student, Centre for Informal Sector and labour studies, School of Social Sciences, JNU)