The recent discovery of a Naga Buddha idol from Banapur area by Professor Anam Behera of Utkal University and his student Dakhineswar Jena has inspired researchers to conduct further study to establish if this cult of Buddhist sculpture was prevalent in the State or the statues were brought from other parts of the country.

Not only in India, but in countries like Burma, China, laos and Thailand, many Buddha statues are seen where Buddha is depicted in meditation pose sheltered by a multi-headed Naga snake which is depicted in Hindu mythology as Shesh Nag.

In Buddhist literature, Buddha idols sheltered by multi-headed snakes are known as the Naga Buddha statues.

According to Peter Vredeveld, a Netherlands- based researcher who has made extensive research on Buddhist sculpture, “Naga in Hinduism and Buddhism is a Sanskrit word for a deity taking the form of a great snake, specifically the multi-headed king cobra.”

“The traditions about Nagas are common in all the Buddhist countries in Asia. In many countries, the concept of Naga has merged with local traditions of many great and wise serpents,” said Vredeveld.

The Buddhist Naga, adds the researcher, has the form of a great cobra, usually depicted with a single head but sometimes with many heads.

According to Professor Dr Nrusingha Sahoo, a researcher who has discovered many Buddhist sites in Odisha’s Jajpur district, the Naga which is seen sheltering the Buddha while meditating is known as Mucilanda and Muchalinda.

“According to followers of Buddhism, Mucilanda or Muchalinda is believed to have protected the Buddha from the elements like rain and storm after he attained enlightenment,” added Dr Sahoo.

“It is said that four weeks after Buddha began meditating under the Bodhi tree, the heavens darkened for seven days and a heavy rainfall started. The mighty king of the serpents, Mucilanda emerged from beneath the earth and protected Buddha with his hood as Buddha is considered the source of all protection. When the storm stopped, serpent king Mucilanda assumed his human form, bowed before Buddha and returned to his palace in joy,” said researcher Vredeveld.

The artistic representations of Buddha meditating under the protection of Mucalinda are common in many Buddhist countries which are famous for their unique Buddhist arts, namely Burma, laos, and Thailand.

Professor Dr Nrusingha Sahoo said it is yet to be established if the three Naga Buddha statues found in Odisha - two in Ratnagiri of Jajpur district and one in Balangir district – were made by Odia sculptors or imported from other parts of the country.

“It requires further studies to establish if Naga Buddha statues were built in Odisha also, a place which has many Buddhist sites. As far as I know, our researchers have sought the assistance from the Archaeological Survey of India (ASI) and the State Museum for further research on the statue,” said Behera.

Most of the Naga Buddha statues are seen with the Naga's body coiled up to serve as a cushion for the Buddha with seven- pronged head providing a hood over the Buddha's head as a cover.

Many historians believe that the Naga Buddha statues originated from India but later, with the spread of Buddhism, the carving of such unique statues started to appear from many Southeast Asian nations, specifically Burma, where the Buddhist arts flourished under the patronage of many Burmese kings.

Therefore, many Buddhist and antique art collectors around the world consider the Naga Buddha statues as the gems of their personal collections. 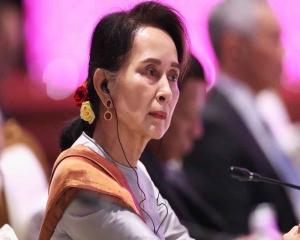