Leopards on the prowl again

Leopards on the prowl again 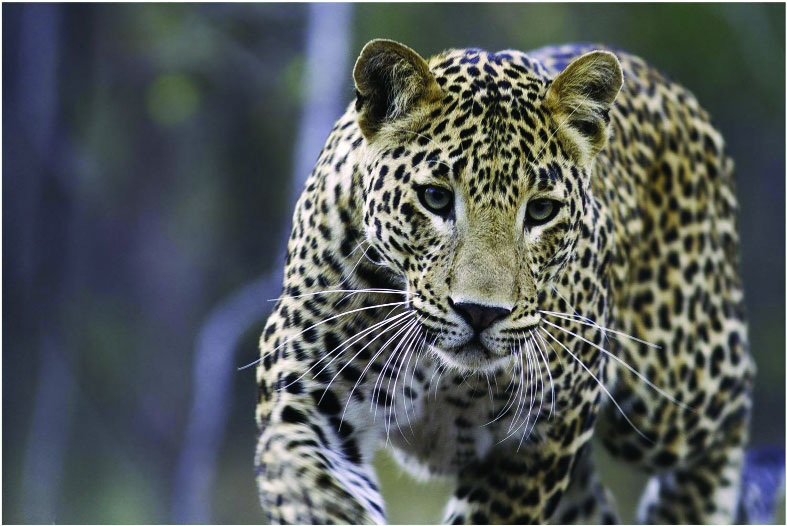 Although the rate of poaching of the leopard in our country is shocking, numbers of the big cat are on the rise and they are dispersing in new areas in a majority of the States

E P Gee, a well-known naturalist, estimated there were 6,000 to 7,000 leopards in the Indian forests in the 1960s, although he had projected 10 times of his estimate at the beginning of the 20th century. Subsequently, a population of about 12,000 leopards was projected at the beginning of 21st century. Based on the recent camera image trap method of wildlife counting in 2014, a figure of 12,000-14,000 adult leopards have been quoted in newspapers and articles. In 14 tiger States, at least 7,910 adult leopards were estimated using camera image trap method in 2014 with an average density of 4.55 leopard per 100 km2 in the occupancy area, although a substantial leopard habitats in the Himalayas, the Vindhyas and leopard-supporting other areas such as tea gardens, sugarcane fields and plantations were not surveyed in these States. Based on the recent reports from the States, the status of the leopard in seven major leopard States is interesting.

Uttarakhand is historically known for high concentration of the leopard, as maximum number of man-eaters emerged in that State. A total of over 2,235 leopards were estimated in 2008 but the present population is expected to be higher than the previous estimate. In Madhya Pradesh, the survey in 2018 indicates that, except five districts, out of 51 districts in the State, the leopard is found in all districts in the State. Livestock kills by leopards doubled in the last six years (2012-18). In a survey using camera image trap method in 2014, at least 1,848 adult leopards were estimated in the State. The survey in 2018 indicates over 2000 adult leopards in the State.

Since 1984, the leopard census has been regularly conducted after interval of four years in Gujarat. Leopard population doubled in the State in three decades. In 2016, a total of 1,295 leopards were counted in 26 districts, out of 33 districts in the State. The leopard density was high, about an average of 10.4 leopards per 100 sq km in its occupancy area in the State though habitats used by the leopard at night for hunting prey were not accounted for while estimating density. In adjoining Rajasthan, a total about 500 leopards were counted in 2009 which increased to 680 in 2016. Leopard population has also consistently increased in Maharashtra. In 2002, a total of about 720 leopards were counted in the State and little less than half of them were reported from the Protected Areas. The camera image trap method in 2014 estimated at least 905 leopards, although increasing leopard-human conflict indicates an increase of the leopard’s population.

Wildlife researchers in 2015 tabulated that leopards occupy 47 per cent of Karnataka’s area. A large number of them are found outside protected areas and forests. The leopard was found in 70 talukas of the 175 talukas in the State; with leopard “attacks” being reported in 51 talukas. The camera image trap method recorded 1,129 adult leopards in the substantial area of the forests in the State which is the fourth highest after Uttarakhand, Madhya Pradesh, and Gujarat. A recent study of its first kind in Karnataka by Nature Conservation Foundation in collaboration with the Karnataka Forest Department has reported that the leopard population is over 2,000 in the state. In 2005, the Chhattisgarh Forest Department estimated 1,293 leopards but distinct images of 846 adult leopards were collected in 2014. Naxalite movement impacted wildlife, including leopards, in the State, as leopard-counting in the Naxalite affected area is difficult. Perhaps the present actual number is higher than the estimate.

In 2005, Himachal Pradesh estimated over 760 leopards in the State. Since then the number has increased. Barring tribal areas in the high Himalayas, the leopard is found throughout the state with good density. Leopard attack is more prevalent in the lower and middle Himalayas compared to higher reaches. Human deaths were rare in the past but the state has witnessed 34 deaths and 367 human injuries due to the leopard attacks during 2004-17. During the last twenty years (1987-2007), the livestock killing by the leopard was alarming: 8,905 livestock kills (3,043 goats, 2,598 sheep, 1677 cattle and rest other animals) in Mandi district alone.

Forest regions but contrary to the leopard population in the above States, the number of mega mammals, including leopards declined consistently due to poor status of conservation.  The seven States (Arunachal, Meghalaya, Manipur, Nagaland, Tripura, Mizoram and Sikkim) in the North-East of India support good forests, about 143,230 km2, which have forest canopy density above 10 per cent. But survival of even 500 adult leopards in these seven states is doubtful. Similarly, Dandakaranya (a massive forest) in four Naxalite-affected states (Chhattisgarh, Jharkhand, Odisha and Telangana) was historically known for wildlife — tiger, leopard, elephant sloth bear, wild buffalo, Indian gaur, deer and antelopes. This region still has good forests in an area of 152,864 km2 but the leopard population is expected to be below 2,000. The forests in the rest of twelve leopard states have moderate density of the cat. Increasing human-leopard conflicts, frequent straying of the animals to the fringe areas of cities and villages and their dispersion in new areas reveal that the leopard is on a come-back trail in all States, except the North-East of India and Naxalite affected region in the Central India.

Based on the recent survey using camera image trap method in the tiger States, leopard census in other states and the recent (2018) reports of the Chief Wildlife Wardens in the states, the State-wise leopard population has been presented in Table above.

During the last few decades, leopards claimed maximum human casualties after elephants among all wild mammals in India. During 2000-15, on an average, about 90-100 people were killed {average of 96 annual humans death/year during (2001-05)} and near thousand human injuries annually by the leopards in India, although it was less in 1970s but over four times before the Second World War. Maximum human attacks have been recorded in Uttarakhand, Maharashtra, Gujarat, Himachal, Karnataka, Madhya Pradesh and Jammu & Kashmir. In Uttarakhand, the leopards attacked 874 humans over a period of 14 years with an average of over 62 attacks per year. Over 300 people died due to leopard attack during (2000-15) and 95 man-eating leopards were hunted down.

Human killing by the leopard in and around the Sanjay Gandhi National Park near Mumbai is globally known. After removal of leopards from several areas of high concentration zone, leopard attack on human decreased but increased subsequently with increase of the leopard population in Maharashtra. The leopard’s attack on humans has increased again in the present decade as 97 deaths and 337 injuries to human due to leopard attacks were reported from the State during 2010-17.

In Gujarat, the scale of leopard rescue is going up. In 2016-17, a total of 334 leopards were caged from the villages in the state which further increased to 451 leopards in 2017-18. The increasing rescue operation of leopard indicates the level of conflict that the management has to deal with; in 291 leopard attacks on human beings during the last three years (2015-17), 33 people died. In Karnataka, a study (March 2013 to April 2014) documented 245 leopard attacks on humans and 56 leopards capture in 14 months. It has been reported that “near half of Karnataka lives with leopards.” Himachal Pradesh has witnessed 306 cases of leopard attacks on humans during 10 years (2006-15) and many of them died. The man-leopard conflict is going up in the State.

Tea estates adjoining the forested areas in West Bengal were identified as conflict hotspots.  Between April 2001 and March 2008, most leopard attacks took place in the tea gardens in the Western Doaars (90 per cent of the 243 leopard attacks). Tea gardens are prime places for conflicts as leopards can prey upon cattle reared by tea garden workers. Straying of the leopard in urban areas of Mumbai, Guwahati, Bengaluru, Shimla, Vadodara, Junagadh, Dehradun, Meerut and Darjeeling is very common. Human-leopard conflicts also increased in Madhya Pradesh, Haryana, Rajasthan and some areas of Uttar Pradesh. In other States in India, the conflict level is low.

The Wildlife Protection Society of India, New Delhi, has documented leopard poaching and intentional killing in India. During the last 23 years (1995-2017), a total of 4,373 leopards, at an annual average of 190 leopards, were poached or killed intentionally in the country. Although this rate of poaching of the leopard in the country is shocking, the leopard numbers have kept on increasing and dispersing in the new areas in majority of the States. TRAFFIC, India and WWF India studies estimate a massive trade of illegal leopard body parts. Many of the leopard’s body parts are successfully smuggled to neighbouring countries in Asia such as Nepal, Myanmar, Laos and Tibet. Of leopard body part seizures during the ten years (2001-10), maximum seizures were in Uttarakhand, Uttar Pradesh, Delhi, Karnataka, Maharashtra, Madhya Pradesh and Himachal Pradesh. Another key finding is that leopard skins dominate the illegal market of leopard body parts: 88.3 per cent seizure incidents involved only skins. An additional 5.5 per cent incidents involved skins with other parts such as claws, bones or skulls. Seizures of bones are a very minor fraction. The total estimated the illegal trade of the body parts in ten years (2001-10) was from about 2,295 leopards. Since the seizures were only the part of the illegal trade, it indicates a high magnitude of trade in leopard body parts in India. Despite this level of poaching, the smart leopard has managed to increase its population.

(This is the concluding article of the two-part series on Indian leopards. The first part appeared in these columns on Wednesday, October 17.  The writer is Member, National Board for Wild life.)