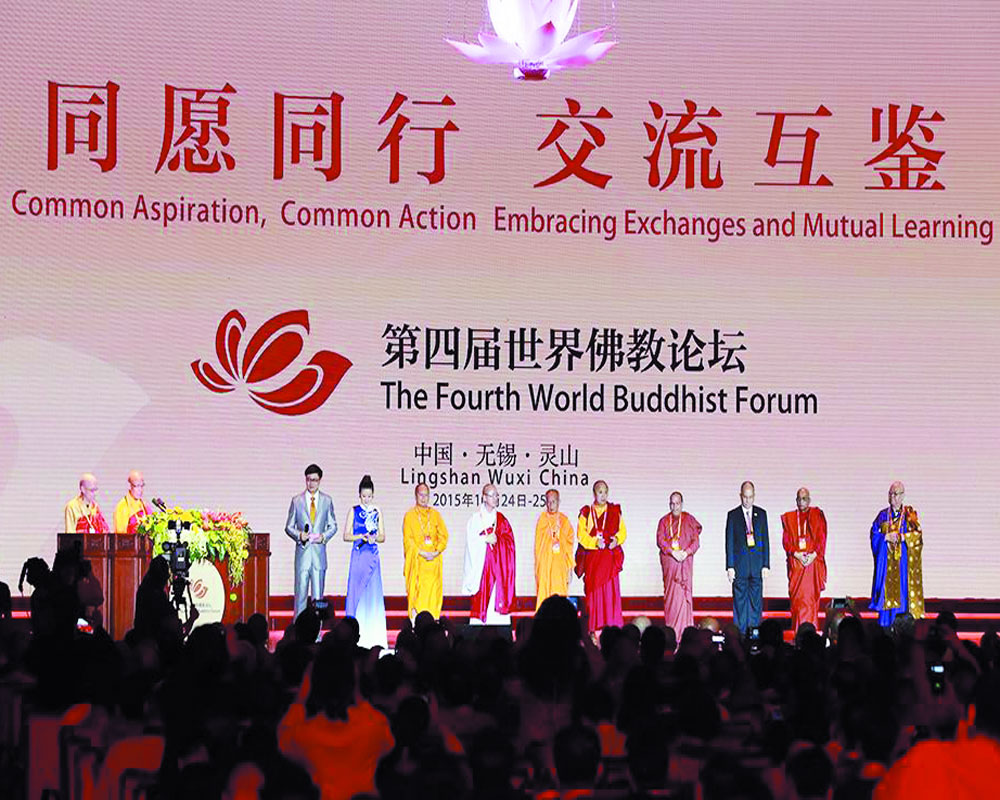 Though China is keen to become the world leader in promotion of Buddhism, it will never happen because of the gap between the Marxist theory and repression on the ground

China is a country full of dichotomies. Take Buddhism. On one side, China promotes Buddhism; on the other hand, Beijing severely represses the Buddha dharma. On October 28, the World Buddhist Forum opened with fanfare at Putian, in Fujian Province. According to the official release, it was attended by a record number of over 1,000 Buddhist monks, scholars and representatives from 55 countries. Zong Xing, Vice President of the Buddhist Association of China (BAC) and Xiao Hong, a deputy secretary of the China Religious Culture Communication Association (CRCCA), the joint hosts, gave a press conference.

Xiao announced that the forum wanted “to carry forward the positive Buddhist cultural spirit, promote exchanges between Buddhism and other religions and make contributions to building a community with a shared future for humanity.” That sounds good. One of the themes of the meet was “Buddhism and the Belt and Road Initiative (BRI)”, a project dear to President Xi Jinping. A couple of weeks earlier, the Global Times had reported that a two-day symposium in Qinghai Province discussed the way Buddhism could better serve the BRI and resist separatism.

The website tibet.cn noted: “Guided by the core socialist values, the symposium aims to encourage Tibetan Buddhism to adapt to the socialist society and teach the religion to serve the construction of the BRI.” Was the Fujian Forum a great success? It does not appear so reading the rare comments which appeared in the Chinese Press. One of the problems was that Master Xuecheng, the BCA president and Abbot of Longquan Temple in Beijing, had to resign in a hurry in August.

The 52-year-old was accused to have coerced nuns into having sex, overseen illegal construction work and embezzled funds. The claims were made in a 95-page document published on July 31; it immediately went viral on Chinese social media, bringing support to China’s #MeToo movement. It is not that Xuecheng was not well-connected with the Communist Party; he was a member of the Chinese People’s Political Consultative Conference (CPPCC), but in the present days, even tigers fall (President Xi had warned the ‘tigers’ and the ‘flies’ that he would not accept corruption).

One of the BCA’s Vice Presidents was Gyaltsen Norbu, the Chinese-selected Panchen Lama. He made a timid appearance on the first day. He spoke on, “to live together in harmony through the Middle Path”, a purely religious topic; Norbu emphasised a common future for humanity and the fact that the creation of a ‘common-destiny community’ is more and more accepted the world over. He mentioned the Buddhist precepts of living in symbiosis, equality, tolerance, compassion and harmony: “We are one family living in the same house,” he said. There was no word of praise for Xi.

His presence was hardly reported by the Chinese media, probably because he did not eulogise Xi Jinping and he ‘forgot’ about the BRI in his speech. The only big shot was You Quan, director of the United Front Work Department, which looks after religious affairs for the Party’s Central Committee. He hoped that “Buddhist communities would look deeper into Buddhism values and contribute wisdom to promoting the well-being of humanity and safeguarding world peace.”

Here comes the dichotomy. While Beijing promotes Buddhism’s humanitarian precepts, it takes repressive measures against Buddhist practitioners. For the third consecutive year, the authorities banned a major Tibetan prayer festival in Larung Gar, the largest Buddhist institute in Tibet, situated in Serthar County in the Garze Tibetan Autonomous Prefecture of Sichuan Province. The monastery had a population of 30,000 Buddhist nuns and monks before it was partially destroyed by the ‘authorities’ last year.

According to Radio Free Asia (RFA), a Chinese official announced that the Dechen Shingdrup festival would be banned this year. He cited Chinese ‘religious affairs management laws’. Further, outsiders should not be invited to Larung Gar. A source told RFA’s Tibetan Service: “The notice advised village leaders and Chinese Communist Party committee members to inform the public that they would not be allowed to enter the village for any religious events. …In past years, when it was allowed, the festival lasted for a whole week.” Human Rights Watch  published a new report on the ‘Four Standards Policy’ recently introduced in the Tibetan Autonomous Region (TAR). The ‘standards’ are competence in Buddhist studies, political reliability, moral integrity capable of impressing the public and willingness to play an active role at critical moments. In other words, be good Communist Buddhists.

The new policy is a continuation of the 2005 Regulations on Religious Affairs but with more oppressive clauses. On October 25, the Global Times said that the TAR Government was encouraging Tibetan monks and nuns “to learn about the laws, a move experts hailed as using education to raise local people’s legal awareness.”

Tibet’s Department of Justice announced that “professional working teams organised by the regional department of justice taught the monks about legislation and law enforcement in the region. …Teams are composed of prestigious monks, legal professionals and officials that were dispatched to temples.” Xiong Kunxin, a professor at Tibet University in Lhasa, summarised the issue: Legal education on law enforcement was weak in Tibet “because some Buddhist practitioners consider themselves as people beyond judicial reach.”

Already in August, when Wang Yang, the CPPCC Chairman and a member of the Politburo’s Standing Committee, visited the Sera monastery near Lhasa, he mentioned the new theme of Xi Jinping’s religious campaign, “Sinicisation of the religions in China.” Wang said that more efforts should be made to integrate Tibetan Buddhism into China’s socialist society; he asked the monks “to firmly uphold the leadership of the CPC, inherit and promote patriotism and be courageous to battle all separatist elements, in order to further protect the national reunification, ethnic unity and social stability.”

Though China is keen to become the world leader in promotion of Buddhism, it will never happen because of the gap between the Marxist theory and the repression on the ground, which are incompatible.