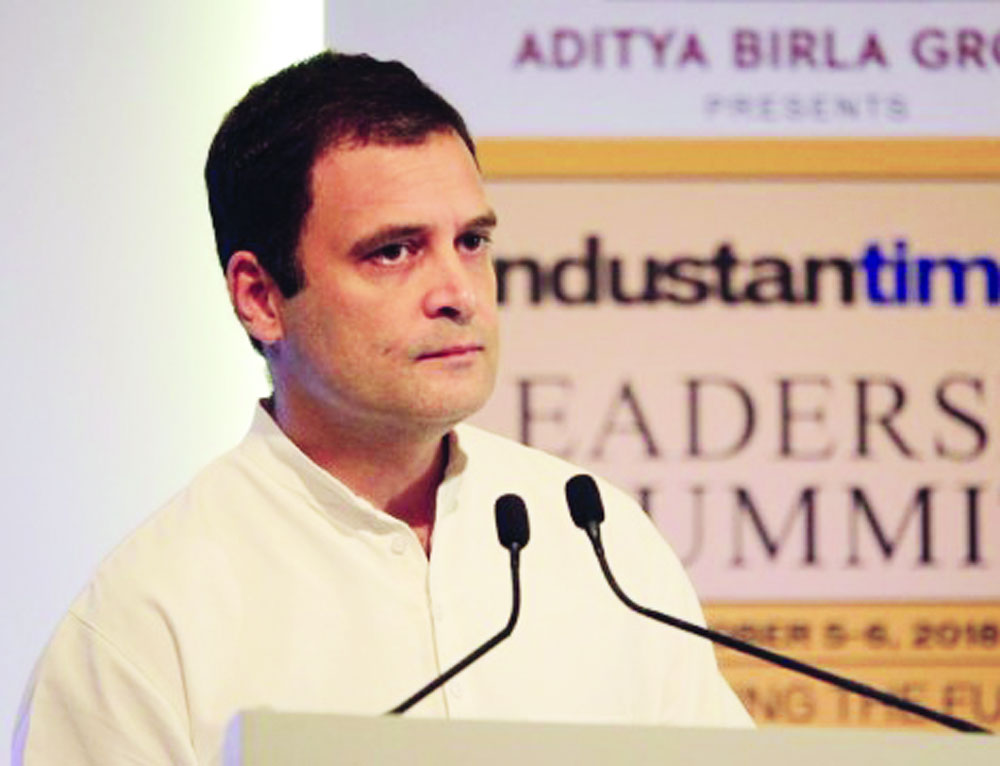 Rahul Gandhi must be more circumspect in his comments on education administrators in the country and not drag politics into everything. If he wants to change the long-established system of appointments, he should promise to do so when he is in power

In one of his interviews, Congress president Rahul Gandhi, while talking about the selection criteria of vice-chancellors during the Bharatiya Janata Party Government, made a remark that “the sole qualification of vice chancellor after vice-chancellor chosen to lead India’s top universities is that they belong to the RSS.” Nothing could be more damaging to the Indian education system than his remark and that too when he considers himself to be the future Prime Minister of the country.

Through one statement, Rahul Gandhi has denigrated the entire higher education system and exposed his lack of understanding of the selection process of vice-chancellors to the universities under the Union Government. In doing so, the Congress president has not only damaged the reputation of the office of the vice-chancellor but also of the search-cum-selection committee that is constituted to shortlist the most deserving academics to the higher education which sends them to the President for consideration.

The search-cum-selection committee members, one of which (chairperson) is nominated by the President, happens to be the visitor of the universities under the Union Government. The rest two are identified through a time-tested nomination process. The final decision of selecting the vice-chancellor, however, rests with the President. Hence, Rahul Gandhi has also brought disrepute to the office of the visitor.

What was the criteria for selection of vice-chancellors during the Congress rule? Incidentally, a glaring case of a vice-chancellor came to my mind who was a Muslim from Jammu & Kashmir and was appointed for the post soon after a Kashmiri was hanged for anti-national activities. This, people thought then, and it appears true now that it was an act to appease the Muslims in Jammu & Kashmir. The vice-chancellor was later sent/went on leave for whatever reasons and he appealed to the court against his ‘removal’. Two former Union Cabinet Ministers were helping him in the court of law to defend his case.

Rahul Gandhi also expressed his concern that the Vidya Bharati schools, that are run by the RSS had been teaching content not in the national interest. He questioned their funding as well. He has again erred in his understanding. The Vidya Bharati schools are the successors, in the true sense, of the national schools set up by Gandhiji during the freedom struggle. Again, he is not aware that the schools are run by the funds collected through fees and  contributions of a large number of people. Why has he never asked similar questions to other chain of schools established with religious objectives? He is simply exposing himself by venturing into such areas.

Rahul Gandhi also lamented that the present Government has not set up any institution worthy of reference as his Government had done by establishing the IITs and the IIMs. This is no achievement to be counted in the history of 70 years of Independent India. IITs deserve to be praised but not the decision of the then Government, as this was done at the cost of those millions of children who remained out of school because the major portion of the education Budget was spent on creating such elite institutions.

The money should have been ideally spent on schools especially primary schools. Rahul Gandhi is blissfully ignorant of the silent revolution taking place in education. Among the major paradigm shifts in education is the use of information and communication technology in education.

The creation of the Study Webs of Active–Learning for Young Aspiring Minds (SWAYAM), massive open online course (MOOC) platform and development of the (Indian) content on it for education is a landmark development. There are more than three million learners using this platform which is far ahead of the other platforms from other developed nations.

The Congress president should be advised to catch up. The beneficiaries of this and similar other digital initiatives are learners who could not be provided the luxury of sitting in Nehru/Gandhi institutions created in towns and cities established over 70  years. Learners are now able to access books and documents from remote locations which they could not do otherwise. Rahul Gandhi is still thinking in terms of brick and mortar institutions.

In his very first address to Parliament, Prime Minister Narendra Modi had revealed his vision of education for India and the sub-continent. He had said that India would launch a satellite for education which will reach education not only to all parts of the country, but to the neighbouring South Asian countries as well. The Ministry of Human Resource Development launched a bouquet of 32 direct-to-home (DTH) educational television channels on July 7, 2017.

There are more than 30 million (three crore) views of video lectures broadcast through these channels. Education is being made available at much lower cost to the less privileged and the marginalised through digital initiatives now than ever before.

It is important to remind that similar planning was done by the National Democratic Alliance (NDA) Government during 1999-2004. A satellite dedicated to education was planned and launched in 2004 immediately after the NDA went out of office. The capabilities of the EduSat remained unutilised and the satellite was burnt out in 2011. Education could have reached the masses at a minimal cost but this did not suit the decision makers because they were interested in creating more buildings and buying more computers.

Research by educationist Professor Pawan Sharma carried out on 10 districts on eastern Uttar Pradesh reveals that the state of primary education is the worst in Amethi. Does Gandhi still want the education Budget to go into the hands of builders and mafia so that the children remain illiterate? The initiatives taken in the last four years have benefited more learners than the initiatives in the last 50 years. To prove the point further one needs to look at the training of teachers.

The Right to Education Act was passed during the UPA II in 2009 and the Government promised to train all primary teachers within five years, as this was a mandatory condition. The Government could not make provision for training of more than a few lakh teachers up to the deadline of March 31, 2015. The present Government decided to provide training to nearly 15 lakh teachers through the digital initiatives and they have all successfully completed two-third of their studies and by the end of March 2019 they will all be provided the required training as per the Right to Education (RTE) Act.

To call academics RSS or Congress is an insult. Academics at best can have ideological stand based on their understanding but they not be called RSS or Congress men. Gandhi and the like in politics should not make such loose comments about academics and academia.

If India has not fared well in Program for International Student Assessment (PISA) as well as Times Higher Education World University Rankings, it is because Rahul Gandhi and the like keep making such remarks, lowering the image and morale of academia.