How to make a monkey out of simians at Parliament

How to make a monkey out of simians at Parliament 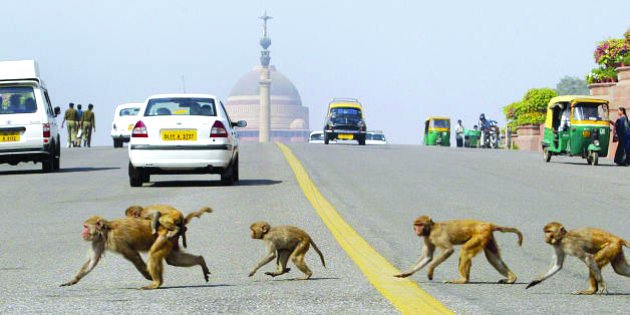 With monkey menace prevailing in the corridors of power in New Delhi, including Parliament, ahead of the Winter Session, the Lok Sabha Secretariat has come out with a circular advising people not to make direct eye contact with monkey and do not cross the path between a mother and her infant.

The Parliament House Complex, along with other nearby buildings, including the North and South Blocks and the Rashtrapati Bhavan around the Central Ridge forest, faces monkey menace. There is no official data on Delhi’s monkey population.

The city has thousands of Rhesus Macaque monkeys that break into houses, terrorise people and steal food. The civic bodies estimated around 30,000-40,000 monkeys in the national Capital. Many people feed monkeys on Tuesdays and Saturdays — days associated with God Hanuman. This practice means that people carrying food at other times risk being bitten. Around 90 per cent of the monkeys carry tuberculosis.

The circular suggests: “In case a monkey collides with your vehicles (especially two wheelers), do not stop there. Do not get scared if a monkey makes a ‘kho-kho’ noise as normally it is a bluff, ignore the monkey and walk away. Be light footed while passing through monkey group i.e do not run. Do not irritate or tease the monkey, leave them alone and they will leave you alone,” the circular said.

It further suggests that one should not hit a monkey. Keep hitting the ground with a big stick to make monkey leave your house and garden.

Officials of the Municipal Corporation of Delhi (MCD) are clueless about tackling the problem as despite several advertisements none of langur walas came forward to catch monkeys.

A few years ago, the MCD had tried to relocate the monkeys caught from the Lutyens zone at the Aravalli hills. But the experiment failed as the simians grew in number and fanned out in search of fruits. Locals objected to the place being used for relocation as they faced animal attacks.

In July, the Delhi Assembly had formed a five-member committee to find a solution to the menace of stray dogs and monkeys in many parts of the national Capital.

Earlier, the House committee of the Rajya Sabha, responsible for allotment and maintenance of its MPs’ accommodation, wanted to take a different approach to tackle the problem of monkeys and stray dogs. It had sought public opinion and experts’ views to prepare a report after “studying in detail” the issue.

The monkey menace is not entirely a new experience for the MPs. In 2004, when Mani Shankar Aiyar became a Minister, he refused to go to his allotted bungalow on Kamaraj Marg as the unused accommodation had become a night shelter for monkeys.

In 2007, Delhi’s deputy Mayor SS Bajwa died of head injuries after falling from his terrace due to attack by a group of monkeys. In 2012, then Finance Minister Pranab Mukherjee once lamented that monkeys were eating his home-grown pumpkins.

In 2016, a simian entered in the reading room of the Parliament meant for MPs and journalists and roamed around for half an hour.