A ride into military school

A ride into military school 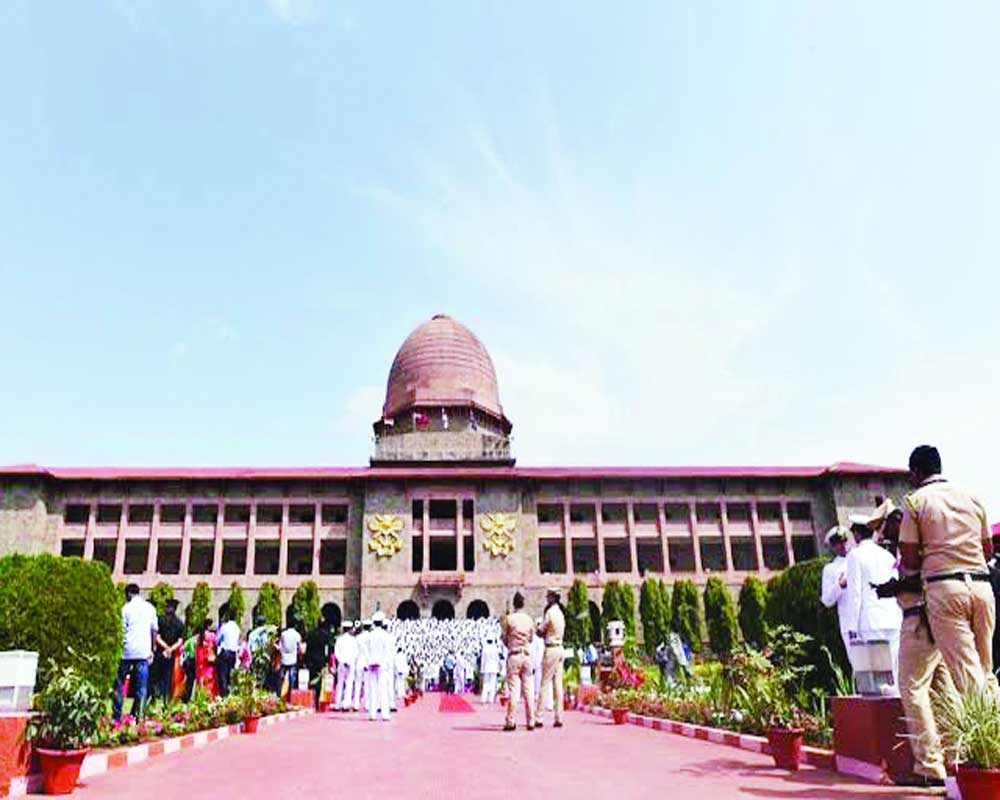 The defence academy at Khadakwasla is truly tri-service and a unique training institution, which sows the seeds of camaraderie, military ethos, customs and traditions

Returning to one’s roots in soldiering is replete with nostalgia, inspiration and feeling 10 years younger. Revisiting the National Defence Academy (NDA), Khadakwasla, Maharashtra, after more than six decades was re-living one’s days when well-rounded heads were being fitted on square shoulders. We were the pioneers, who in 1955, moved from the Joint Services Wing (JSW) in Clement Town, Dehradun, to the emerging military township of Khadakwasla near an iconic lake — the spectacular landscape overlooked by Shivaji’s impregnable Sinhagad Fort. In the sixth and final term, Sinhagad became the touchstone for long-range patrolling, stamina and survival. Sticking out of the earth was the majestic central cupola, the nerve centre of the academy, flanked by the cadets’ mess and the education block. Neat rows of road radiate from these commanding heights in three directions — towards the Pashan Gate, the Central Vista and the Avenue to the Lake.

In January 1955, trainloads of cadets were relocated in their new home Khadakwasla, the pride of India. It was to become the cradle of military leadership and excellence where “jointness came naturally.” All the 1,000 cadets would branch out after three years together for their choice of service: Army, Navy or Air Force. Potential Army cadets were cross-trained. For example, I was sent on Indian Navy frigate Cauvery for a week while a Navy volunteer went to an Army establishment and similarly, the Air Force to a different sister service. After the sixth term, one would go to the Naval, Air Force and Army military academies for the final year of training. Currently, cadets indicate their choice of service after the fourth term.

Last week in Khadakwasla, I witnessed change and what has not changed and is still reminiscent of 1955. First, the change. All the way from Pune’s Southern Command Officers Mess, the 25-km stretch to Khadakwasla was then desolate, habitated with lush green woods. What took one hour on a bicycle, took two hours, given the concrete jungle that has crept towards NDA and much is in the possession of the Defence Research and Development Organisation (DRDO) — its  kingdom. Farmhouses, luxury resort hotels and restaurants have encroached on the precincts of Khadakwasla. The Pashan Gate is new with a massive security apparatus.

The welcome landmark is the Gole Market — nothing has changed here. This market is etched in my memory because a week before we were to “pass out” and move to the Indian Military Academy, Dehradun, our joyful celebration was rudely interrupted by one “Major The Sandhu”, an infantry officer who was uniformly dreaded by cadets. It was past midnight. Four riding an ordnance-issued bicycle, strictly meant for one, was sacrilege, especially when Maj Sandhu, who was returning in his car from Pune, nearly collided with the overloaded bicycle. For breaking several military regulations, Maj Sandhu used multi-lingual invectives and had four of us charge-sheeted.

Punishment: While all of the 11th course was allowed to pass out on December 1, 1956, we were detained for 14 days. The driver of the bicycle was Divisional Cadet Captain Jaswant Singh, who was complimented by the Commandant, Maj Gen Inayat Habibullah, for “steering a bicycle as expertly as a horse.”

The cadets’ living room is the same except that a limited wi-fi is now available. Like Jammu & Kashmir was put in a lockdown, cadets are forbidden the use of cellphones. The technology of the bicycle is vintage though the satchels the cadets carry has improved.

From 12 squadrons, the academy now has 18 squadrons and a cadet strength of 2,000. “Item” has become “India” squadron, my “Fox” squadron to “Foxtrot” and “Dog” to “Delta.” The Ante Room has the familiar aquarium but now a billiards table, too.

Barbara Bonny, the wife of our Squadron Commander, Maj LKM Bonny, used to teach us the Foxtrot and on the weekends, commandeered busloads of Pune lasses for live practice. Gen Habibullah and his wife Hamida put the cadets through sessions of Indian cultural training — music, drama, mushaira and once even Bollywood.

There was no change in the cadets’ mess. Rations and quality of food match any reputable restaurant. Outside are pictures of early times. Former President Rajendra Prasad, dining with the cadets, flanked by Gen Habibullah and Gen Moti Sagar, both drinking port… the classic shows Premier Chou en Lai in a black Mao jacket in the cadets’ mess during our passing out parade.

As the chief guest, he presented me with the inter-company Squash trophy, which is captured in the film on 1962 war, Hum Dono. This was the era of Panchsheel and Hindi Chini Bhai Bhai (India and China are brothers) full of banter and bonhomie even as the Chinese had started building the road through Aksai Chin, which former Prime Minister Jawaharlal Nehru divulged to Parliament only in 1959.

There are fabulous pictures, which must be the envy of memorabilia collectors — Pandit Nehru and Gen Habibullah, both on horseback, surveying the academy from a vantage point as it was being built. It is clear from other pictures of Nehru that the Khadakwasla project was his baby. Another picture is of Lt Gen JN Chaudhury and Nehru engaged in serious conversation. Army Chief Gen KS Thimayya and Nehru in a tete-e-tete. Thimayya and Nehru were good friends, enjoyed  immense rapport despite professional differences.

Today, like yesterday, there is total lack of rapport and conversation between top military leaders and the political elite. The last Army Chief, who could chat up politicians, was Gen Bipin Joshi. The absence of meaningful dialogue between the political and military leadership has let the bureaucracy usurp critical advisory space. Today, the Prime Minister cannot find the time to have a useful conversation with his Service Chiefs.

The Habibullah Museum, meagre in space, contains rich memories and souvenirs, including a stunning ornamental khukuri, presented by C in C Royal Nepal Army, Gen Surendra Bahadur Sahib (must be Shah) in January 1966. The once-splendid Bombay Stadium has alas gone to seed. So have the Squash courts near it. The cadets play individual sports like squash, tennis and golf. The Golf Course doubles as the military training area and is named after the legendary Russian language teacher Jaouralov.

Notwithstanding our fear of Maj Sandhu — he would famously counsel “do not trust wife, rain and enemy” — he taught us the best field craft to be a cat burglar, poacher and marksman that saved our lives and those of the men under our command in all the skirmishes and wars. NDA is truly tri-service and a unique training institution, which sows the seeds of camaraderie, military ethos, customs and traditions. That is how DCC Jaswant Singh became the Defence Minister of India.