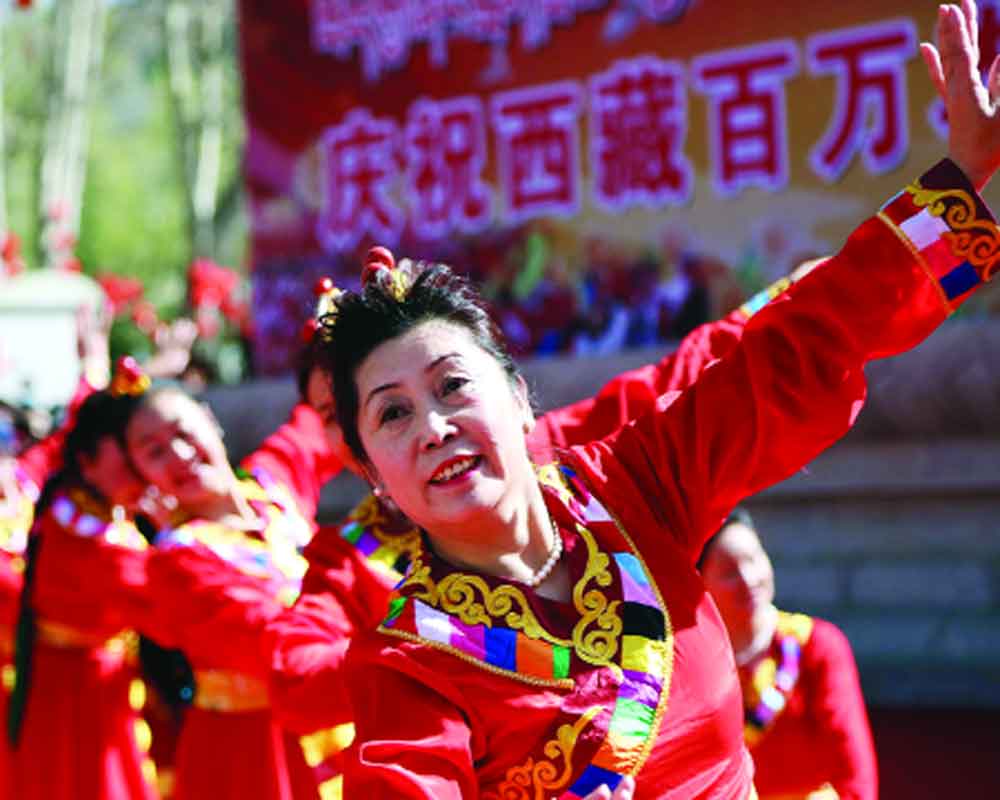 Beijing will celebrate the emancipation of the serfs in Tibet on March 28. Ironically, the communist party has forgotten what happened at Tiananmen Square on June 4, 1989

Cary Huang, a senior columnist with the South China Morning Post, wrote recently: “In 2019, China ushers in a year full of both festive jubilation and political trouble. Its communist leadership places enormous emphasis on the anniversaries of important historical events …China has a lot to celebrate in 2019 but it also has old wounds to heal.” He noted that with its packed 2019 calendar of commemorative events, Beijing may “forget” some of them, “many of which are politically charged or divisive. For a nation moving forward, it’s time to acknowledge the difficult past.”

But today, in Xi Jinping’s China, who is ready to analyse the past? Huang gave the example of March 28, the day when Beijing will commemorate the 60th anniversary of Serfs Emancipation Day. What is this “emancipation?” March 28, 1959, marks the end of the massacre of the Tibetan population in Lhasa and Beijing’s taking of rigorous control over the Tibetan capital; 18 days earlier, the Dalai Lama had fled the Roof of the World to take refuge in India. On March 28, the revered Dalai Lama was sacked as chairman of the Preparatory Committee for the Tibet Autonomous Region and was replaced by a (then) more pliant Panchen Lama.

Incidentally, will Beijing observe the 30th anniversary of the death of reformist party chief Hu Yaobang and the subsequent student-led pro-democracy protests, which resulted in thousands of casualties during the military crackdown in Tiananmen Square on June 4, 1989? An Alzeimerish communist party is bound to have forgotten what happened on the Square after the demise of Hu Yaobang as well as the thousands who died in Lhasa but the Emancipation Day is still celebrated.

Several non-Tibetan accounts of the events of March 1959, including the popular uprising, the flight of the Dalai Lama, the massacre of the Tibetan population and finally the so-called ‘emancipation’ — all this in less than three weeks — are available.

In his ‘Report for the months of March, April and May 1959’ sent to the Ministry of External Affairs, Maj SL Chibber, the Indian Consul General in Lhasa said: “In the history of movement for free Tibet, the month of March, 1959, will be most historic …during this month Tibetans high and low, in Lhasa, capital of Tibet, openly challenged the Chinese rule … the might of [the] Chinese People’s Liberation Army (PLA), who on March 20, 1959, started an all-out offensive against the ill-organised, ill-equipped and  untrained Tibetans with artillery, mortars, machine guns and all types of automatic weapons, was short-lived.”

The Dalai Lama left Lhasa secretly three days earlier. Chibber continued: “On March 28, 1959, the State Council of the Peoples Republic of China dissolved the local Tibet Government and transferred all its functions and powers to the Preparatory Committee for the Tibetan Autonomous Region (TAR).”

Yet another account was given by Jianglin Li in her book, Tibet in Agony. She also used Chinese sources to describe the crackdown in Lhasa. Jianglin wrote: “In March 1959, a series of critical events played out in Lhasa. From March 25 to April 5, the CPC’s Central Committee held an enlarged politburo meeting, and the seventh plenary session of the Eighth Central Committee in Shanghai. Pacification of rebellion in Tibet and relations with India were two of the issues discussed. Wu Lengxi, who was then head of Xinhua news agency and chief editor of The People’s Daily, revealed a glimpse of Mao’s thinking on the China-India relationship in his memoir: “Let the Indian Government commit all the wrongs for now. When the time comes, we will settle accounts with them.”

The accounts were ‘settled’ three years later on the slopes of the Thagla ridge and in Ladakh.  Jianglin added: “Mao was brooding on ‘settling accounts’ with India as early as March 1959. Yet on May 15, in a letter from the Chinese Foreign Ministry to the Indian Government, he wrote: ‘Pacification of rebellion and implementing democratic reform in Tibet would pose no threat to India whatsoever.’ ”

RS Kapur, another Indian official posted as Indian Trade Agent in Gyantse, wrote in his Annual Report for the Year 1959: “The year 1959 will go down as the most important year in the history of Tibet. It marked an end to the way of life of the Tibetan people. The Dalai Lama, who felt that he could no longer function effectively, left his country in March. …With Opposition out of the country, Chinese got a free hand and they went all out to subjugate the country. People have been deprived of their movable and immovable property.”

He further asserted: “While the heart of Tibet was bleeding, the free world only made speeches. With the end of the debate on Tibet in the United Nations, Tibetans lost all hopes of their survival, stared at the sky with blank eyes and asked: Where is God? Where is Buddha?”

During the 1950s, the Chinese had time and again used the same propaganda argument; once the Tibetans would be ready, the PLA would leave the Land of Snows. Some members of the Communist Youth League were told: “Tibetans should work hard to become capable of shouldering the responsibility of the administration of their country.” They were given the example of Inner Mongolia where the Chinese personnel withdrew when the local people were able to run the administration in an efficient way.

Che Dalha, the TAR Chairman, announced that everything was fine now. “High-tech and digital industries, together with agriculture, tourism and culture, green industries and modern services, have become major industries, contribute to high-quality growth in the region,” he declared. Tibet’s GDP in 2018 was estimated at more than $21 billion, up about 10 per cent from 2017.

However, during a session of the 11th TAR People’s Congress, Che spoke again and again about poverty alleviation. His Government, said Che, had lifted 50,000 people out of poverty in 2018 and would eradicate absolute poverty by 2019; he promised that he would create new jobs for 50,000 people in cities and towns. Once could ask: what was the point to ‘liberate’ Tibet and then ‘emancipate’ the Tibetans if there are still so many poor 60 years later?