Listen to the youth

Listen to the youth 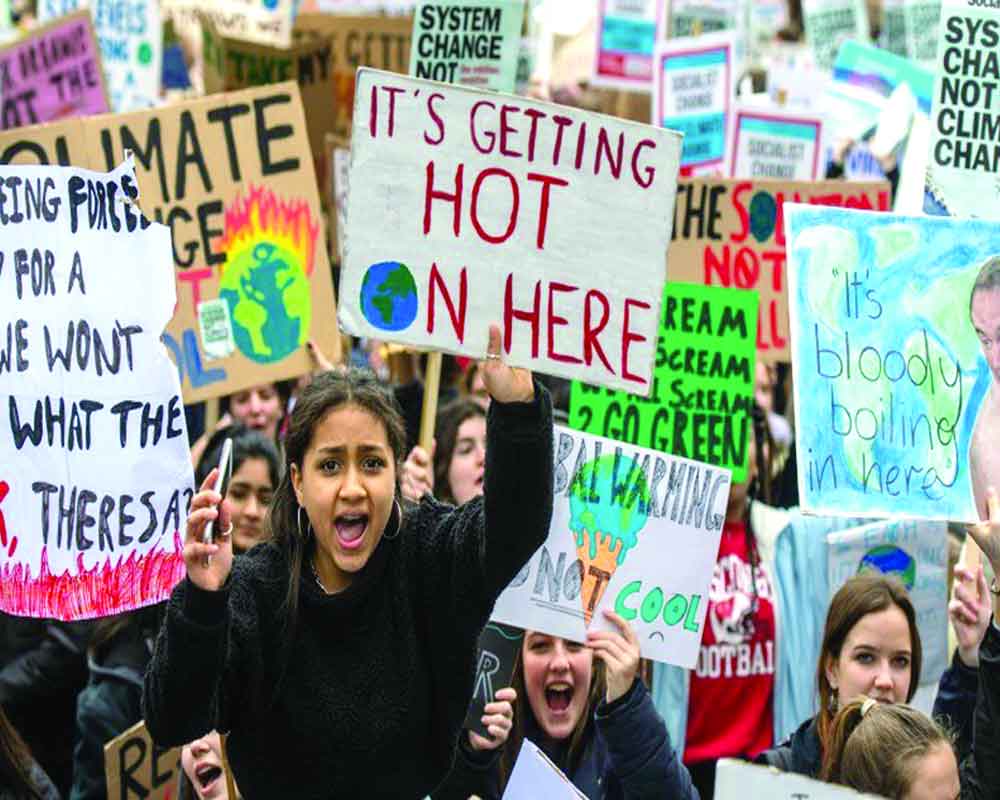 Where adults have shown a deadening inertia for change, young people are now taking the lead and demanding action because what is at stake is their future

Jack Andraka was in high school and only 15 when he won the grand prize at the 2012 Intel International Science and Engineering Fair for presenting a method for detecting early stages of pancreatic and other cancers. Jack was deeply moved by the death of someone who he regarded an uncle and someone he was very fond of. He found from background research that most of those, who lost their lives from pancreatic cancer, were unable to detect its occurrence early due to lack of methods by which it could be screened in a simple manner. He, therefore, began his research by first going to Google, Wikipedia and drawing content from YouTube.

Wikipedia states that Jack followed up with more research on nanotubes and cancer biochemistry aided by free online scientific journals. He then contacted 200 professors at Johns Hopkins University and the National Institutes of Health with a plan, budget and timeline for his project, hoping to receive laboratory space and help from a professional. Of these professors, 199 declined Jack’s plan, while Anirban Maitra, Professor of Pathology, Oncology, and Chemical and Biomolecular Engineering at Johns Hopkins School of Medicine, invited him to his lab. Jack was then able to come up with his innovation for detecting pancreatic cancer. An elite global audience in New Delhi was spellbound by listening to his journey into the world of scientific innovation when this writer invited Jack to the Delhi Sustainable Development Summit as a special guest some years ago.

We are living in very special times. Not so long ago, youth in general and teenagers in particular, followed the guidance and direction of their parents and teachers while fashioning their careers and preparing for their ultimate goals. This has changed radically now. Given the widespread availability of information and knowledge on the internet and the almost precocious maturity displayed by a 15 or 16-year-old doing things that one associates with someone perhaps decades older, we are witnessing a revolution among the youth of today.

Perhaps even more challenging than coming up with scientific discovery, involving sophisticated research, is the daunting task of going against the power of vested interests, who block action on simple solutions to societal problems. The gun lobby in the US, for instance, led by the National Rifle Association (NRA), has consistently foiled attempts to impose even the most basic restrictions and controls on ownership of guns even by those who are depraved and demented. The NRA is a powerful lobby with substantial resources and these are deployed across the board to fund the elections of Democrats and Republicans alike. The website of the NRA shows that this body has a membership of 5.5 million. It also carries a message which states: “The Left Vows to End Gun Violence by Coming After You.”

In the shooting that took place at a school in Parkland, Florida, in February 2018, there was widespread shock at the wanton killing of so many innocent young children. Such incidents have occurred on several occasions in the US, clearly showing how easy it is for a depraved person to own a gun and shoot anyone at random. Yet, the gun lobby in the US continues with its hypocrisy and actually suggests that guards in schools should be provided with guns to protect against incidents such as in Parkland, Florida. It is heartening that the surviving children in that school and many others have stepped up their efforts with the US Government to impose controls and restrictions on gun ownership. They have a better chance of success than any other group.

Far away in Sweden, a 16-year-old girl, Greta Thunberg, was inspired by the survivors of the school shooting in Parkland, Florida, and she began a weekly strike every Friday to walk away from school and turn to social media, appealing to politicians to support and take steps toward halting carbon dioxide emissions. Some months ago, Greta struck a lone figure sitting outside the Swedish Parliament in Stockholm with a sign which read in Swedish: “School Strike for Climate.” She was deeply concerned about what was happening to the earth’s climate as a result of human actions, having studied the subject in school at the age of 11. The rest, as they say, is history.

In December 2018, she addressed in Poland the Conference of the Parties of the UN Framework Convention on Climate Change. She addressed 150 members of the UK Houses of Parliament, tapped the microphone and asked: “Can you hear me?” She met the Pope and several others on the same trip. On March 15 this year, it is estimated that 1.6 million people in 133 countries participated in a climate strike inspired by Greta and these protests and strikes have continued every Friday.

On Earth Day 2016, the Protect Our Planet (POP) movement was launched in Mexico City. Since then this movement has grown particularly in Mexico, others parts of Latin America and some locations in Europe. The whole purpose of the POP movement is to mobilise youth, who number 1.8 billion between the ages of 11 and 24, and have them carry out actions to reduce the carbon footprint of their institutions and change their own lifestyles by which every individual’s carbon footprint is also reduced.

There are several inspiring examples of young people who are mobilising others on their campuses and motivating them to take collective action. The Julius Stursberg Gymnasium school in Germany has recorded remarkable success not only in reducing waste but also minimising their own carbon footprint. Vanessa Hernández, a talented student at the University of Guadalajara, has also shown remarkable leadership in mobilising students in her university for effective action.

Where adults have shown a deadening inertia for change, youth are now taking the lead and demanding action by policy-makers and leaders from every stakeholder group in society because their future is at stake. The risks from the impacts of climate change will seriously imperil the youth of today and their voices must be heard. It is time for the youth of today to shame adults who have been totally insensitive to the future of their children and grandchildren. We need youngsters like Greta Thunberg, Vanessa Hernandez and the children of the school in Germany to show us the way.