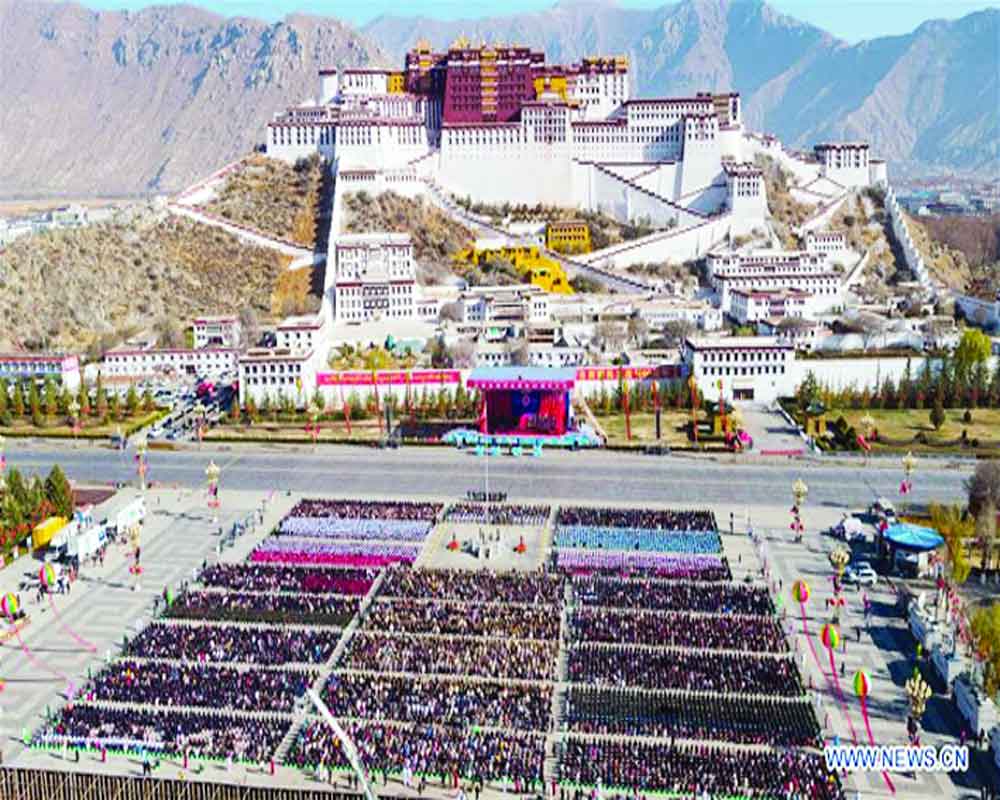 Despite the propaganda that the Tibetans took ‘their destiny in their own hands’ in 1959, Beijing still does not trust local cadres in governance

For the past several weeks, the Chinese propaganda machine has been running full-steam. The focus of the information warfare’s exercise is on the events of March 1959, which ended in a bloodbath in Lhasa, but which is today being promoted as the “Emancipation of the Serfs” and the “Introduction of the Democratic Reforms”  by the communist regime in Beijing. One could ask: Where is democracy in China today?

Just take a look at the list of party secretaries in Tibet — since August 16, 2016, the Communist Party of China’s boss on the Roof of the World is Wu Jingjie. He is the 15th Han to hold the post since the People’s Liberation Army (PLA) entered Tibet in 1950. Can you imagine Tamil Nadu having non-Tamil Chief Ministers for more than 60 years or any other Indian State for the matter? The fact is that despite the propaganda that the Tibetans took “their destiny in their own hands” in 1959, Beijing still does not trust the local cadres.

The Serfs’ Emancipation is an even bigger lie. In fact, it was a massacre that saw thousands of ordinary Tibetans losing their lives in Lhasa. We have several genuine accounts of what happened at that time.

From the Chinese sources, it is worth mentioning a Kindle book, The 1959 Tibetan Uprising Documents: The Chinese Army Documents (China Secrets), published last year which provides documents from the PLA’s military intelligence on the bloody events of 1959. Another account of the events is given by Jianglin Li in her book, Tibet in Agony. The preface of the book of the Chinese scholar affirms, “The first clear historical account of the Chinese crackdown on Lhasa in 1959. Sifting facts from the distortions of propaganda and partisan politics, she reconstructs a chronology...”

China celebrates March 28 as the Serfs’ Emancipation Day, the day “reforms” could finally be implemented on the Roof of the World; the Tibetan Government had been declared “illegal” by Mao and the so-called Tibetan serfs had been liberated from feudalism and theocracy by PLA guns.

Then, there is the report of the Indian Consul-General in Lhasa (Maj SL Chibber) to the Ministry of External Affairs in Delhi. Maj Chibber, an Indian Army officer from the Jat Regiment, had already spent nine years in Tibet. Chhiber, a reliable eye-witness (he even heard a few bullets passing overhead during the uprising), wrote: “In the history of movement for a free Tibet, the month of March 1959 will be most historic as during this month  Tibetans, high and low, in Lhasa, Capital of Tibet, openly challenged the Chinese rule in Tibet. They set up an organisation called the Tibetan Peoples’ Independent Organisation …staged demonstrations to give vent to their anti-Chinese feelings and demanded withdrawal of the Chinese from Tibet. But this challenge, before the might of the Chinese PLA — who on March 20, started an all-out offensive against the ill-organised, ill-equipped, untrained-Tibetans with artillery, mortars, machine guns and all types of automatic weapons — was short-lived.”

He further explained the Dalai Lama’s flight: “Smelling danger, he left Lhasa secretly on the night of March 17, 1959, …for Lhoka area (south of Lhasa), where at that time Khampas had full sway.” The Dalai Lama ultimately took refuge in India on March 31.

Matthew Akester studied the findings of Jianglin Li: “Satisfactory confirmation of detail for this period of Tibet’s history is notoriously difficult due to official secrecy and the virtual non-existence of reliable non-official documentation. The figures assessed, though incomplete, provide crucial indicators of the scale of the PLA’s engagement in Tibet at that time.”

After assessing a larger number of official Chinese documents, Li noted: “Although global estimates remain elusive, the study shows from official figures that something in the order of 10 per cent of the total Tibetan population was involved — killed, wounded and captured — in military operations during these years [1957-59].”

Li wrote that besides PLA units, a large number of local militia supported the operation: “The numbers of militia I was able to find in Sichuan, Gansu, Yunnan and Qinghai add up to over 71,000 people.” Civilians were also drafted for various tasks such as transport, evacuation of wounded soldiers, handling pack animals; no less than 143,000 civilian laborers.

The number of casualties was estimated at 10,934 (4,748 dead and 5,223 wounded) on the PLA side, without taking into account Lhasa and Central Tibet (for which figures are unknown). The Tibetan casualties were 2,55,600 for Qinghai, Gansu, Sichuan and Yunnan only for the years 1957-59.

In January 1957, while on a visit to India, Zhou Enlai, the Chinese Premier, had long discussions with the then Prime Minister Jawaharlal Nehru on the introduction of the so-called reforms. Beijing had decided to postpone them by at least for six or seven years. In the course of the conversation, Zhou pointed a finger at non-existing foreigners in Lhasa: “Those bent on trouble are preparing for an incident in Lhasa. These people have some armed forces. Some three temples in Lhasa have also armed forces and they want to create an incident there. If it happened, then there would be bloodshed.”

Although there was no “foreigner” in Lhasa, except for the Indian staff of the Consulate General, but the bloodshed indeed took place in March 1959; it helped Mao to firmly consolidate the position of the Communist regime. In January 1959, Mao and the Central Committee realised that “the PLA had to be used to control the rebellion.” China was facing a revolt of the “serfs.” On January 22, 1959, Mao wrote: “It is good, since there is a possibility for us to solve the [Tibet] problem militarily.” The Chinese are fond of announcing “don’t hurt the Chinese sentiments.” One could ask, what about the Tibetan sentiments? Will the compassionate Dalai Lama ask for an apology for what the Chinese did in Tibet in the 1950s? He should.