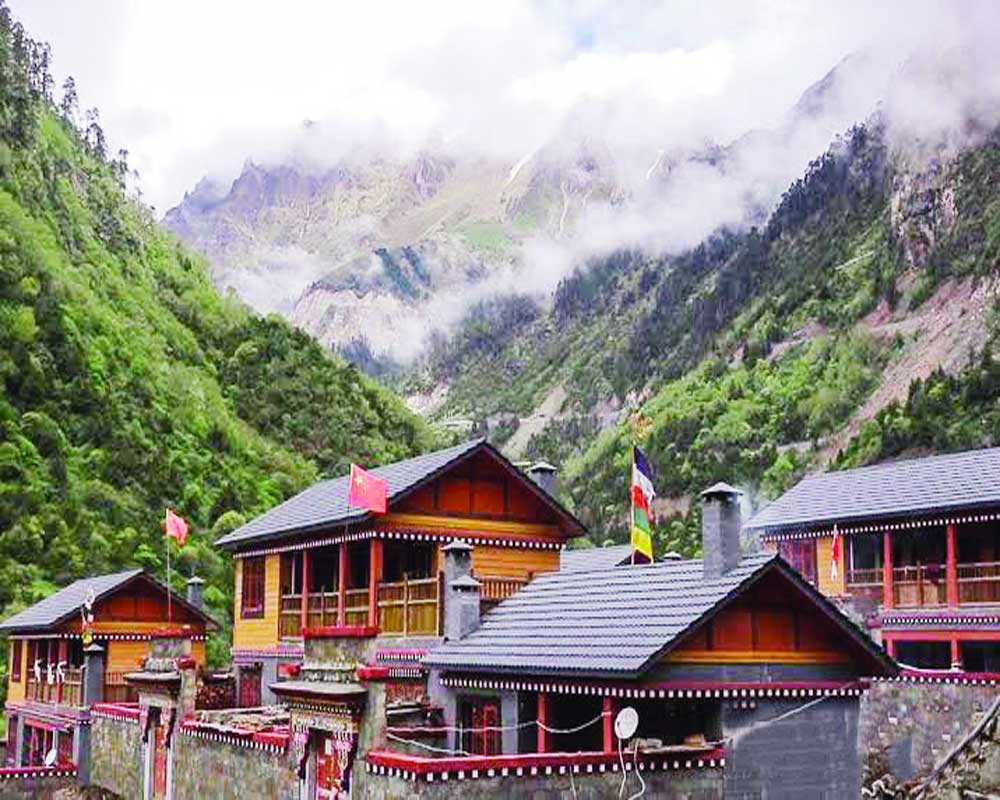 While China has undertaken multiple development projects near the Indian border, Delhi has been very slow and remains hesitant to see tourists in restricted areas

Recently, the Indian media was agog with news about the latest  deployment of the Chinese People’s Liberation Army (PLA) close to the Indian borders. One website, the Indian Defence News, affirmed: “China strengthening military base near Uttarakhand’s Lipulekh Pass,” which is located near the tri-junction between Nepal, Tibet and India. It explained: “The new base has 20 parking hangars and also maintenance hangars. Medium-lift helicopters for the local Army aviation brigade have also been spotted… There are signs of a military build-up opposite Lipulekh Pass on the northeastern tip of Uttarakhand.” It cited some intelligence sources saying that the PLA had built a helipad close to the pass and also “installed two surveillance cameras, a Long Range Reconnaissance and Observation System (LORROS) and a solar panel.”

Some other reports mentioned model villages being built by Beijing near the Indian border. This is not new, though the scale should worry New Delhi. The information about Lipulekh Pass is probably linked to the new airport coming up near Purang (Taklakot); it will serve the Kailash/Manasarovar area.

On June 9, 2018, the Civil Aviation Administration of China and the Tibetan Autonomous Region’s (TAR) provincial government announced that Tibet would soon have three new airports. An official communiqué stated: “Construction of the three airports, all above the altitude of 3,900 metres, should begin in 2019.” The new airports are to be located in Lhuntse county in Lhoka (called Shannan by the Chinese) area, north of the Upper Subansiri district of Arunachal Pradesh; the second will be between Tingri and Lhatse counties of Shigatse City, north of Zangmu, the border post with Nepal, and the last in Purang, near Lipulekh.

It was then announced: “The airports should be completed in 2021; by then, there will be eight airports in TAR.” The news agency added: “At present, the preparatory work for the three airports is under way. The preferred sites have been determined;” the idea is “to consolidate the border and to promote the deep integration of the military and the people.” While tourism and “cultural” industries remain the pillars of the so-called stabilisation, defence is also vital for the Chinese authorities — one of Chinese President Xi Jinping’s pet projects is the Military Civilian Integration (or “fusion”).

Another of Xi’s favourite schemes is to make “patriotic” Tibetans “the protectors of their sacred homeland.” The last two years have seen the mushrooming of model villages near the Indian border; they are known as “Xiaogang” or “moderately well-off villages.” The pretext for building more than 100 such border villages is “poverty alleviation.” Tibetans need to be pulled out of poverty (incidentally, is it not strange that 70 years after the arrival of the communists on the plateau and the so-called liberation of Tibet, the populations still lives in such pitiable conditions?).

But “poverty” is not the only motivation. Xi once famously declared: “Govern the nation by governing the borders; govern the borders by first stabilising Tibet; ensure social harmony and stability in Tibet and strengthen the development of border regions.” These villages are following the “double-support model city”, which translates into full military and civilian integration.

The authorities have started implementing the theory of their boss by providing decent housing to the villagers and enticing the local recalcitrant Tibetan population to their side. Local satraps have a new leitmotif, the inhabitants of China’s borders (with India) should be “the protectors of the sacred homeland and the builders of happy homes.” The construction of “model” villages on the Tibetan side of the Indian border, mainly north of Arunachal Pradesh and also in Himachal and Ladakh, is the outcome of this. Several senior communist leaders have visited these new villages, either north of Kibithu in the Lohit valley; in Metok, north of Upper Siang district; in Yume (also written Yumai), north of Takshing in Upper Subansari or in Lepo, Marmang and Tsona, north of Khenzimane and Tawang.

Take Metok County, for example. China Tibet News reported that there are 46 administrative villages (including one multi-ethnic inhabitation area consisting of Monpa, Lhopa, Tibetan or Han) with a total population of 13,725: “In 2018, the county’s GDP has reached 606 million yuan ($99 million); farmers and herdsmen’s per capita disposable income and cash income have reached 10,380 yuan ($1,687) and 8,833 yuan ($1,486) respectively.”

In October, 133 villagers belonging to 29 households moved into their new houses. Reports said how “all the township’s residents are living in free houses provided by the Government,” in Puma Changthang township, north of the Bhutan border. “Sharing a 25-km border with Bhutan, where the average altitude tops 5,300 metres above sea level, the Puma Changthang township is in Nagartse county; it is renowned as the world’s highest township.”

The report explained: “Resettlement in new housing provided by the Government is part of its efforts to ensure the entire population lives comfortably in border areas… Project construction includes villagers’ houses, party’s committee offices, village clinics, water supply and roads” and, of course, these “multi-ethnic” villages will welcome Han Chinese.

Take another example. It was reported that Tibetans in Bayi village of Nyingchi City, north of Arunachal Pradesh, have come together and jointly “built a beautiful hometown as well as a better life.” Incidentally, places called Bayi (or 8-1 for August 1, the PLA anniversary) are usually under the Army’s management.

The article said that by the end of 2016, 16 impoverished villagers were lifted out of poverty through pairing assistance (ie, with the support of a mainland province), through participation in the collective economy and self-employment: “Bayi Village improved farmers and herdsmen’s cultural living standards, supported the construction of a “cultural” square, a village library and also organised various cultural and sports activities such as Tibetan circle dance, tug of war, lifting stones or archery.”

But at the same time, a review committee in Tsona county warned: “All townships and villages must come together to improve the village rules and regulations [of the party], standardise the daily behaviour of the villagers and strengthen the rural revitalisation strategy goals.”

“Standardise the daily behavior” is ominous. On the Indian  side, everything moves slowly as usual. A welcome exception is the Sisseri River bridge in the Lower Dibang Valley of Arunachal Pradesh, recently inaugurated by Defence Minister Rajnath Singh. It will cut down travel time from Pasighat to Roing by about five hours. But the Government remains hesitant to see tourists in “restricted” areas. China does not have this problem.