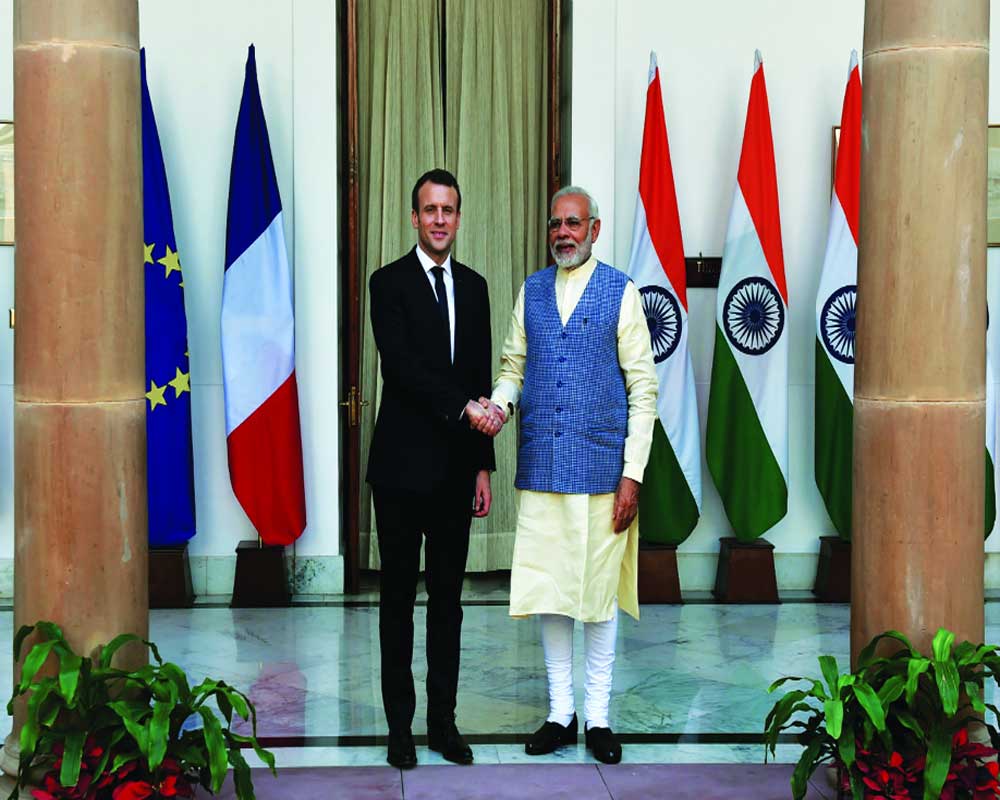 France has had a long relation with India, particularly in the defence sector. One area where India can be of great help to it pertains to the transport sector

Remember the months before the legislative elections, L’affaire Rafale was in the news everyday, thanks to the then leader of Opposition, who alleged hanky-panky in the intergovernmental deal signed between India and France for acquiring 36 off-the-shelf Rafale multi-role fighter planes. The day the campaign was over, no line of negative writing has appeared in the media. Of course, L’affaire was just an electoral plank and had no connection with the reality of the deal itself.

Dassault Aviation is back in the news and this time for better reasons. The headline of one national daily read, “Rafales are coming! Deadly French fighter planes to arrive soon; Rajnath to receive first aircraft this month.”

It has been a long journey since the first Request for Information for 126 Medium Multi-Role Fighter Aircraft was made in 2001. Five years ago, the then French Defence Minister Jean-Yves Le Drian came to India on a two-day visit. He was trying to resurrect the stagnating deal with his Indian counterpart, Manohar Parrikar. In an interview for The Pioneer, he told me: “France and India share a wide range of common interests. Our strategic partnership, developing since 1998, when the BJP was in power, includes defence and security.” Regarding the Rafales, he observed: “The negotiations are proceeding well. For a project of this scale and such complexity, which brings the transfer of

know-how to several industrial stakeholders of India, the pace is comparable to that of other negotiations. Both our Governments share the will to conclude it and this is, of course, essential.”

But it was far from being done. In fact, it took two more years and the will of the Indian Prime Minister to sign a Government-to-Government agreement for 36 planes. On October 8, Defence Minister Rajnath Singh will finally receive the first plane at Dassault’s factory in its facility in Merignac near Bordeaux. The first four planes should arrive in May 2020. Other jets will follow in quick succession. What a protracted, painful road!

The Indian Air Force (IAF) has already started training 24 pilots in three different batches to fly the Indian custom-made combat aircraft, which will be deployed (one squadron each) at Ambala airbase in Haryana and Hasimara in West Bengal.

As a new Chief of Air Staff (CAS) was nominated, the IAF received “acceptance” for its first Rafale in Merignac, where the planes are assembled. On the tail of India’s new Rafale is painted “RB-01”, standing for Air Marshal RKS Bhadauria, who will take over as the new CAS on October 1 and whose role was pivotal in negotiating the final deal between India and France. The IAF’s Deputy Chief, Air Marshal VR Chaudhary, had just flown the Indian jet, which will be equipped with latest gadgets, in particular Meteor missiles, SCALP ground attack missiles and many other equipment that must remain top-secret.

This comes at a time when India faced a difficult time on the international scene with two of its neighbours clubbing their forces to internationalise the Kashmir issue. China distastefully decided to support Pakistan’s objections to the abrogation of Article 370 of the Indian Constitution, which has surprised many. India undoubtedly needs all its energies, resources and friends to face these two separate fronts.

Incidentally, France was the first country to torpedo the Chinese initiative to get a statement on the abrogation of Article 370 from the Security Council. Further, on August 21, Jean-Yves Le Drian, now Minister for Europe and Foreign Affairs, telephoned his Pakistan counterpart, Shah Mahmood Qureshi and told him that for France, Kashmir was a bilateral issue between India and Pakistan. Le Drian pleaded for restraint, de-escalation and easing the situation.  The message was clear.

France has a long relation with India, particularly in the domain of defence. In the early 1950s, India had purchased 71 Ouragans (known in India as Toofanis) from the same Dassault company. HS Malik, the then Indian Ambassador to France, wrote to then Prime Minister Jawaharlal Nehru in October 1953: “All of us in the Embassy, who have been working on the implantation of the contract with the Defence Ministry here for the supply of Ouragan aircraft, were greatly relieved and delighted when we got the news that our four pilots with the four Ouragans had reached Palam safely.” He continued: “I venture to bring to your notice the wonderful cooperation that we have received both from the French officers of the Ministry of Defence, from the Cabinet Minister downwards and from the French industry.”

Since then, India and France remain reliable friends. Prime Minister Narendra Modi was French President Emmanuel Macron’s special invitee at the G-7 meet in Biarritz in South France. The two leaders met before and the joint statement noted that the “traditional relationship is enduring, trustworthy, like-minded and all-encompassing. India-France relations are marked by mutual trust between two strategic partners who have always stood by each other.”

Modi’s visit further strengthened the strategic ties in crucial sectors such as defence, nuclear energy and maritime security and deepened the bilateral cooperation to check the flow of funds for terror activities. The collaboration with France in the Indian Ocean is particularly noteworthy. Apart from defence and new fields in IT, cooperation has developed in key areas such as nuclear energy, space International Solar Alliance and joint development projects.

Symptomatic of the close relations, India and France finalised a closer cooperation in digital and cybersecurity domain: “The two leaders have adopted a cybersecurity and digital technology road map, aimed at expanding Indo-French bilateral cooperation, particularly in the strategic sectors of high performance computing and Artificial Intelligence, with the target of bringing our start-up ecosystems closer to each other,” said the joint statement.

Both nations have been left far behind by China and it is high time that India collaborates with friendly countries in this domain, which will determine the superpowers of tomorrow. With the world in turmoil, France has been and indeed is an enduring partner for India.

Tailpiece: One domain where India could help France is transport security. On the first day of a recent visit to France, I was robbed of my wallet with all my cash in the Paris metro. It is a fact that the Delhi metro is far safer than Paris’. Indian engineers should advise their French counterparts how to have a clean and secure transport system. The number of other avenues in bilateral collaborations is unlimited, the purchase of 36 new aircraft is already rumoured. Don’t understand what “illumined” is supposed to mean?