The tripod of rights

The tripod of rights 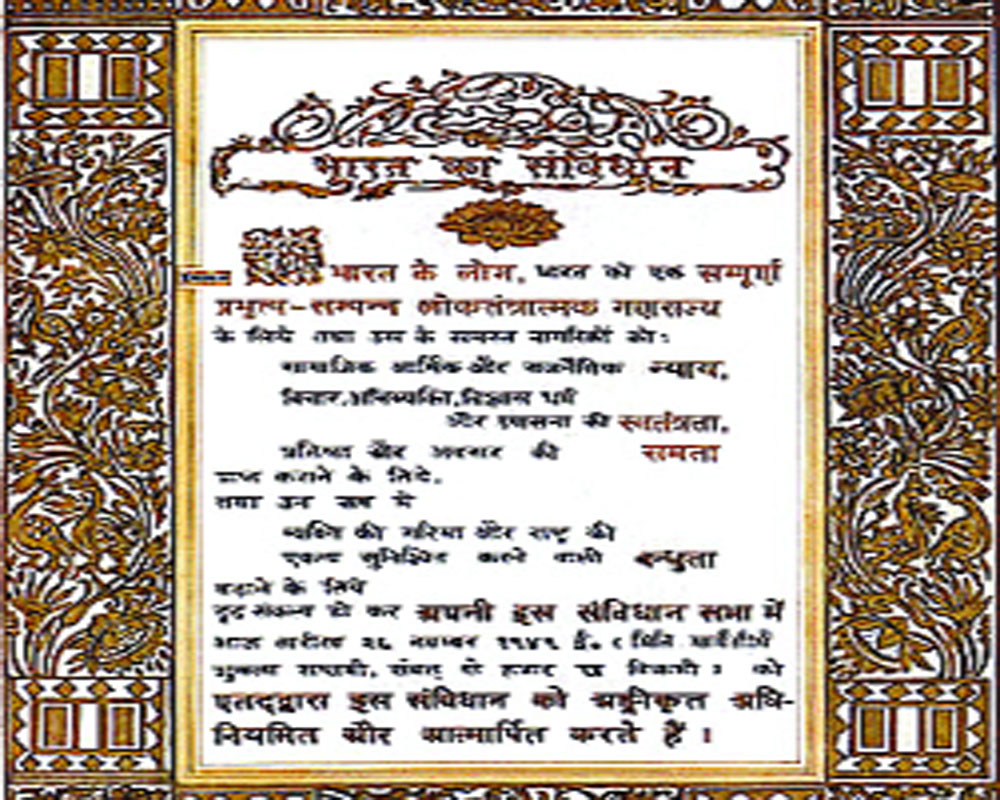 The most poetic promise made in the Constitution relates to liberty, equality and fraternity. But the three words contain a harmless contradiction — that liberty and equality cannot go together

As India celebrated its Republic Day, one’s mind goes to the Constitution and the wonderful promises it made. The most poetic of them all is liberty, equality and fraternity, a vow taken from the central slogan of the French Revolution that began in 1789. The three words incidentally contain a harmless contradiction; namely, that liberty and equality cannot go together. If a society wants to have equality, it has to willy-nilly curb liberty. If say, the income of all its citizens is desired to be equal or equable, inevitably, the Government must place control on higher incomes. And, perhaps, also add subsidy to the lowest incomes. An extreme of this social desire was tried by the communist states led by the Soviet Union.

The contradiction between liberty and equality has best been illustrated by the Hindu faith in karma. How can any society place control over good or better karma? And if a person’s karma is excellent, his bhagya or luck is also likely to be commensurate. How can the society or its Government curb it in order to ensure equality among the citizens? If a person with poor karma performance is expected to have poor luck, he could be subsidised or even fed and clothed for free. But what about the other facets of good luck rewards? Then there is also the risk of the Government running out of money if too many of its citizens are unlucky, poor and need subsidies.

Article 15(1) states: “The state shall not discriminate against any citizen on grounds only of religion, race, caste, sex, place of birth or any of them.” This Article is commendable in insisting that there would be no discrimination on any ground. In other words, it means absolute equal treatment by the state. Yet, Article 30 promises minorities the right to establish and administer educational institutions. “(i) All minorities, whether based on religion or language, shall have the right to establish and administer educational institutions of their choice.” This stands in contradiction of Article 15. It gives this right and freedom to the minorities, which are not allowed to be members of the majority community, namely the Hindus. Minorities comprise mainly Muslims. Christian schools are in such demand that they normally face no problem, nor do the linguistic minorities encounter any difficulties. Article 30 (1A) gives the minorities the privilege of being assured the allocation of land that is affordable by the proposed school or its society.

A more fundamental question arises out of this inequality. That was raised by Acharya Justice Dr Durga Das Basu, who rightly contended that a minority, which deserves such special privilege or protection, is one which became one (a minority) by circumstances beyond its influence or control like a war between two or more countries. In the case of Muslims of the sub-continent, it is they who demanded a separate homeland, a Darul Islam or a New Medina called Pakistan. And it had to be granted by the departing British rulers and conceded to by the Congress because the Muslim electorate in the 1945/46 general elections overwhelmingly voted for Pakistan. To quote from Hamid Khan’s authoritative book,  Constitutional and Political History of Pakistan: “The results showed a decisive victory for the idea of Pakistan. The League won all Muslim seats in the Central Assembly and 446 out of a total 495 Muslim seats in provincial Assemblies. In Bengal, the Muslim League won 113 out of a total 119 Muslim seats and was able to form a Government with Huseyn  Shaheed Suhrawardy as Chief Minister. In the Punjab, the Muslim League captured 79 out of 86 Muslim seats. In Sindh, a Muslim League Ministry was formed. Only in the North-West Frontier Province did the League fall short of a majority by winning only 17 out of a total of 36 Muslim seats. These elections proved conclusively that the Muslim League alone represented the Muslims of India.”

Partition was the single-point manifesto of the Muslim League, which obtained nearly unanimous support in the elections. The League’s proposal, repeated by MA Jinnah and seven of his senior colleagues, was that there should be an exchange of population. Thereby, ideally, all Muslims should gather in Pakistan and all non-Muslims would emigrate to Hindustan. Justice Gopal Das Khosla, ICS, was commissioned to survey the Punjab and report on the immediate post-Partition situation. The report was printed in an Oxford University Press published book entitled Stern Reckoning: A Survey of the Events Leading Up to and Following the Partition of India. Therein, the Justice wrote that an exchange of population was an integral part of Partition. After all, the vivisection of the country was necessary because as Jinnah said that Hindus and Muslims could not co-exist in the same country. If they were able to co-exist, where would be the need for the division?

Article 27 states, “Freedom as to payment of taxes for promotion of any particular religion. No person shall be compelled to pay any taxes, the proceeds of which are specifically appropriated in payment of expenses for the promotion or maintenance of any particular religion or religious denomination.” The writer petitioned the Supreme Court in 2007, requesting that the Haj subsidy  be withdrawn as the Constitution declares that India is a secular country. If, however, the Government was not prepared to do so, he should be exempted from the payment of Income Tax. The subsidy was paid from the consolidated fund of India as the Income Tax was credited to the same fund. Four years later, Justice Markandey Katju delivered a long judgement. Its gist was that the Haj subsidy was like an expenditure made by the Government as incidental to maintaining law and order at the Kumbh Mela or on making arrangements for a visit to Mansarovar. To reduce or abolish the Haj subsidy would damage the edifice of secularism that Jawaharlal Nehru had so painstakingly built.

The following year, namely 2008, Justice Aftab Alam decided, in a petition filed by one Syed Intesar Mehdi, that the Haj subsidy should be progressively reduced and discontinued in the course of 10 years. The subsidy was not in conformity with the tenets of Islam, the judgement said. Incidentally, the late Syed Shahabuddin, IFS and a former MP, had told this writer twice that this subsidy should be gradually withdrawn. So much for the implementation of our secular Constitution.

In conclusion this writer would like to quote Acharya Basu from his book, Introduction to the Constitution of India, 2002, that makes a telling point: “The leaders of divided India incorporated in their draft Constitution, certain safeguards for minorities, notwithstanding the Partition, because they refused to concede on the principle that the Muslims in India constituted a separate nation. That India constituted one nation, whose unity and integrity must be maintained, was proclaimed in the very Preamble of the draft Constitution of divided India. The Muslims, who did not go to Pakistan, did so with their eyes open to this Preamble and the safeguards for minorities included in the Constitution.”